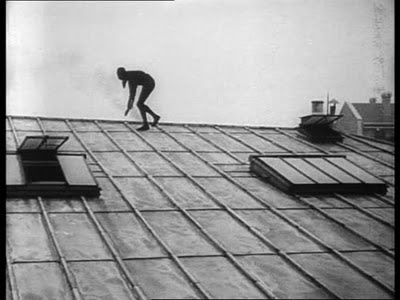 This is a post I should’ve written two days ago, when I had more time. On Friday the floor was cleaner, and could’ve waited. Today, in an hour, I’ll have to stop and vacuum it. I’ve been stalling, and where’d it get me?

I didn’t like Les Vampires at all. When I finished it, late last week, splitting the hour-long last episode into two 30-minute halves so as not to find it so tedious, I already knew the whole thing wasn’t for me. I didn’t expect the finale to save it, and the finale did not. But since then, I’ve tried to ponder what makes this ten-part serial so well-liked by so many. For indeed, there are many who find it wonderful.

The former: Les Vampires is an early French serial, released between Winter 1915 and Summer 1916, composed of ten episodes varying in length between about fifteen minutes and sixty. It concerns the attempts of star reporter Phillippe Guérande (Édouard Mathé) and his comical sidekick, Mazamette (Marcel Lévesque) to outwit the Vampires, a high-functioning French gang of terrorists and thieves.

The Vampires are led by a Grand Vampire (a position in frequent rotation). Always a ‘he,’ the Grand Vampire has access to advanced poisons, able to paralyze or kill in miniscule doses. One even has a portable cannon, transported in luggage, able to destroy a nightclub, or even a passenger ship. The GV’s operatives are ruthless; possessing powers of hypnosis in at least one case, and substantial physical skills in almost all cases. 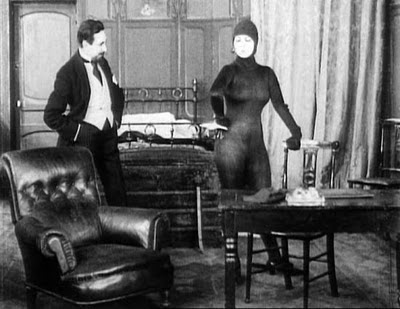 Dressed in black from head to toe (yes, like ninjas), Vampire operatives can penetrate any safe, or safe-house, to get what, or who, they want. Greatest of them is Irma Vep (play around with those letters), the cagey bad-girl with a lot of curves in her black bodysuit. Irma is a mistress of disguise, impersonating several people over the course of the serial, including a young man. She’s hard to kill and, you figure, the kind of woman the rest of the Vampires would love to spend more time with. 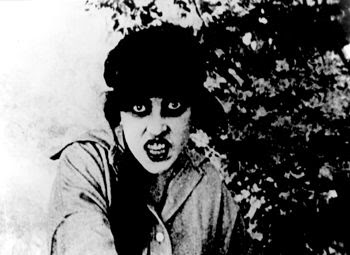 Sounds cool. I picked up the DVD and right on the cover was Irma’s (Musidora’s) face, snarling at me like a blood-lusting, sexy animal. I popped it in and up came the menu screen, playing Les Vampires’ most famous image: a woman in black, with the ears and wings of a bat, twirling in a continuous loop.

In fact, there are no vampires in Les Vampires. The crooks are quite mortal. The woman in the bat-suit is an actress and dancer—one of their early victims. I was let down. But none of this, of course, needed matter if the serial was good. 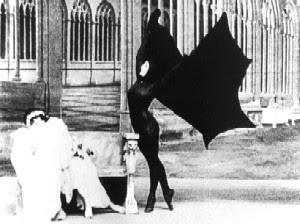 Les Vampires was filmed during a transitional period for silent films. It was around the mid-teens that directors really began shaking off the trappings of the theatre—moving the camera more, closing in on actors’ faces more, urging them to perform more subtly before the lens. In this respect, Les Vampires’ writer and director, Louis Feuillade, seems mostly on-track. But otherwise, he seems years behind the point cinema had already reached.

Les Vampires just plods. Here’s why: Feuillade’s willingness, in episode after episode, to show us the entirety of a long action—start to finish. Imagine footage of a man running, from foreground to horizon, across a field. Imagine that, in medium to long shot, with the camera fixed in position, this takes about 90 seconds. I assure you that the reason for the man’s run, no matter how dramatic, will not keep you from growing bored.

Feuillade pulls this kind of thing a lot in Les Vampires; perhaps believing that the spectacle of what a character was doing could, by the very idea of it, transfix us. I remember a longshot of the side of a building, and a Vampire scaling its entire height in one unbroken shot. And much later, a shot of an open Vampire codebook, and Philippe’s pen, connecting one letter to the next. Many, many letters. Sometimes the characters just stood and jawed to one another, uninterrupted even by intertitles, which made me suspect that what they were saying was not so crucial that I had to witness it all. No episode of Les Vampires needed to be longer than 35 minutes. 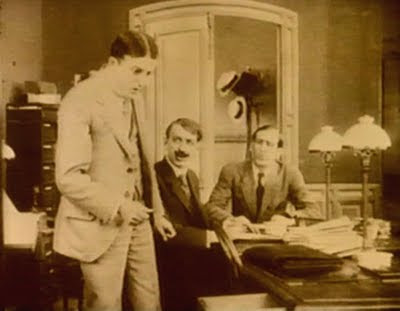 There are problems, too, with the progression from one episode to the next. Les Vampires has no cliff-hangers of the type we’ve come to associate with serials—in addition to each episode being slow, they offer little to make us want to watch the next one. Feuillade typically opens an episode with some development in either the Vampire’s camp (a new scheme; a new operative); or in Guérande’s (he is visiting a relative; he is now engaged). Conflict is inevitable, but not always intentional, and it’s sewn up by episode’s end. The only ongoing problem is the continued existence of the gang.

In this way, Les Vampires is more like a season of a television series—presenting a season-arch (the persistence of the gang) against which the individual scenarios of each episode play. Each episode, insofar as the events in it can be resolved, is self-contained. However, we rely on good TV to advance characters as well as stories, and Les Vampires never really does this.

Mathé is an uncreative hero and the Grand Vampires, though they do interesting things, are not interesting themselves. Lévesque, as Mazamette, delivers the best performance, but as a comic figure in a serial that deals with pretty serious matters, he’s never the main focus. Musidora is loved by the camera, but to those who praise her acting here, remember this: Theda Bara or Nita Naldi could have played Irma Vep just the same.

The standout episode—that is, the one that hummed along best for me—was number 6: "Hypnotic Eyes." In it, the Vampires are challenged not only by Guérande, but by a second criminal gang, led by Moreno, a conniver who pulls Irma into his arms. Moreno’s gang, in turn, is tripped up by a pair of small-timers working their own scam. "Hypnotic Eyes" has a complicated plot, but this is a good thing, because it gives Feuillade less time to linger. And it’s as close as we come to real character development, thanks to Irma’s divided loyalties. 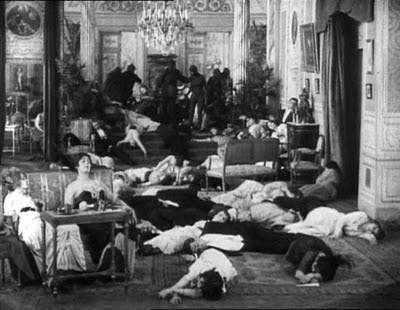 It just kills me to call a silent film “boring.” Some are. But it’s so often a charge leveled against the whole art form, by people who don’t watch silents to begin with, that I hate it. Les Vampires, though, bored me in every episode. There were moments of beautiful photography—like the Vampires in shadow, entering a roomful of partygoers they’ve just gassed, or Irma Vep, rappelling out a window like an unwinding kite-string spindle… or the actress in the bat-suit—but they were brief. And the serial was so, so long.

Where to find Les Vampires:
The complete Les Vampires is available as a double-sided DVD, which you can learn more about here.
Posted by Chris Edwards at 5:43 PM