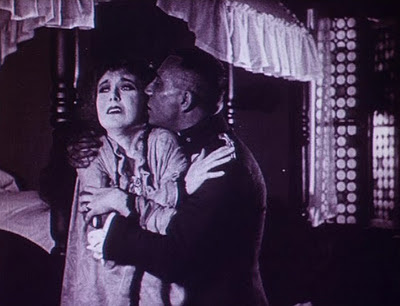 Here’s a movie that begins with a loaded question. The kind that starts arguments:

“Guilty! says the world condemning the “other man”…

…But what of the husband?”

Indeed. Few victims earn easier pity than cheated-on spouses, unless they’re abusive. But Blind Husbands, an interesting film in many ways, suggests that emotional neglect can be abusive too. Can a husband, if he puts work before wife, rightfully lose her loyalty?

Margaret Armstrong, the tempted wife in the film, is paralyzed by her profound sadness, something director and star Erich von Stroheim exploits gorgeously. Francelia Billington plays the lovely, lonely doctor’s bride; Von Stroheim is Von Steuben, a predatory Austrian lieutenant at the same Alpine lodge; while Sam De Grasse is the workaholic husband, Dr. Robert Armstrong. Dr. Robert, a noble figure when it comes to his duties, is guilty of no crime here except inattention.

"Idea films" often age badly, but Blind Husbands feels fairly fresh. This is partly because the issue it examines is timeless, but more so, I think, because what shocked audiences at the time wasn’t just the depiction of adulterous acts, but the sober look Von Stroheim took at why someone would cheat. Just look at Von Steuben. He arrives uniformed, head-to-toe—standing stiff in a tall hat. He looks like the Nutcracker. The mountain men who run the place smirk at him. They tower over him too, like almost every other guy in the movie. We learn nothing of Von Steuben’s past, but we do know he’s short, unattractive, self-important and dull to talk to. If he hooked up with anyone, we’d be surprised.

And oh how he knows it. Von Steuben takes himself seriously because no one else does. His womanizing at the lodge is apparently an annual thing: a conquest of both the women and their men. He seems motivated by nothing but ego. Unlike the protagonist in Foolish Wives, shot by Von Stroheim three years later, there is no suggestion here of a villain in need of money, or protection, or in the grips of nymphomaniacal or sociopathic impulses. There is only a little man who hates himself.

As for Margaret, she’s consumed with guilt, but not because she draws Von Steuben’s attention. It’s because she knows she might take advantage of it. She barely musters the will to repel him the first time, which he interprets, perhaps fairly in this case, as an invitation to try again. 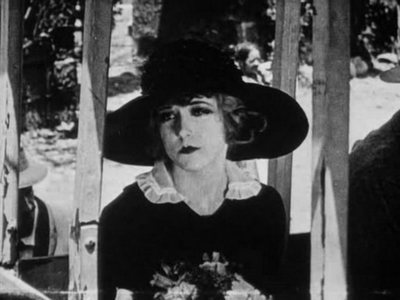 Von Stroheim makes Margaret pitiable. However, he also lets us see her as the lieutenant does—as the lieutenant really does, consciously or not. We often see Billington’s face bathed in light: beautiful, but always terribly down. In one key moment, she leans her head against a wire-backed chair and the pattern makes it appear as though she’s pressed against a bed of nails. This is a woman out of Von Steuben’s league, but so unhappy that she might succumb to him.

He encourages her self-loathing. He undermines her confidence: “Husband? Love? How can one love alone?” then compliments her with the words of a man who’s sincerely paying attention. He gives her gifts. But he is most insidious when he compliments Dr. Robert: “Your husband does not think of you—he climbs the mountains,” Von Steuben tells Margaret one night, the two of them alone in her room. Were Dr. Robert out skiing, this would be an insult; but the doctor is tending to stranded climbers. He’s out saving lives.

This tells Margaret two things: one, that she’s straying from a worthy man; and two, that her husband, dedicated healer that he is, will always put his Hippocratic oath ahead of his wedding vows. Self-hatred and hopelessness make a toxic mix. They make one vulnerable. 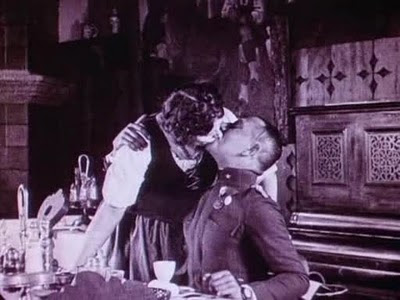 Blind Husbands, like Foolish Wives, is paced for this kind of reflection and analysis more than entertainment, and so, though short, it can be taxing to watch. Von Stroheim directs like a poet composes—focusing maximum attention on a single moment, unpacking and pondering it for as long as is necessary to draw from it every bit of meaning it could impart. I’ve never seen a man nose a woman’s neck for as long as Von Steuben does a waitress’s in one early scene. But because the director lingers on the act, we learn much about Von Steuben’s technique, plus his shamelessness and cruelty toward women desperate for affection. Stick with the film, and you will be rewarded.

But poor Von Steuben. I’ve met more Von Steubens in my life than Dr. Roberts. Blind Husbands’ third act, much of it spent on a treacherous alpine incline, would be nothing but meaningless action if not for the emotions already sparked by this villain, who is all too tragic himself. The man is redeemable, I think. With a little time, or a little love of his own, he might not be the villain at all. He might be Rick Blaine.

Where to find Blind Husbands:
Blind Husbands is available on DVD through Kino International. The disc also includes an early talkie, The Great Gabbo (1929), starring Von Stroheim as a mentally unbalanced ventriloquist.
Posted by Chris Edwards at 7:51 PM