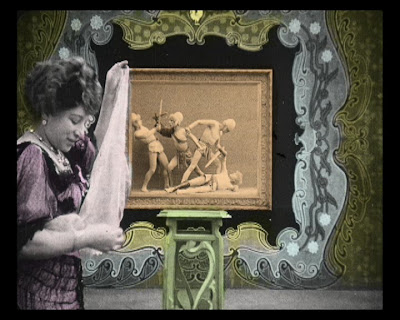 Appreciating films made before 1910 can be tricky. Their sets are phony; their pantomime exaggerated and their camerawork, contrastingly static. They’re also really short. Viewed from the distance of a century, they tend to emphasize their own crudeness more than anything else. If silents are ghettoized within the classic film community (and they are), then these films, deficient by almost any standard we now use to judge a film great, are ghettoized within the ghetto.
Me, I love an underdog. I’ve always been drawn these early, fixed-camera quirk-fests, for reasons too numerous and lengthy to list. Here’s one, though: they come from a period still in awe of cinema’s untapped potential, and the best of them (just a few, as the best films of any period are few) embody that awe, and even explore its meaning. To this day, I think we retain a bit of that sense of limitlessness; but we’ve also got 100+ years of cinematic output behind us, and the role and power of the medium, for good and ill, has been well-established. The most ancient of films express this feeling in full bloom. (Call it naiveté if you wish, but remember: what goes around comes around.)

If we assess them as we would any film—ignoring the urge to patronize them as ‘artifacts,’ or the temptation to elevate ourselves by spouting trivia about their production or their status as technical milestones, while ignoring the result onscreen—we’ll conclude that most of them are junk. However, we’ll also find a few gems—films that, in their exceptional beauty, technical excellence, and message, represent true art. With this in mind, deep into paragraph three of my review, I present: Modern Sculptor.
Modern Sculptor (Sculpteur moderne) is one of Segundo de Chomón’s many fine works. I confess minimal familiarity with De Chomón and his films; I know he was a Spaniard who worked in France, and his work is often compared to that of the great George Méliès. Readers of Silent Volume know I’m a huge Méliès fan. I think I’m going to be a huge De Chomón fan, too.
Modern Sculptor is a five-minute ‘trick’ film—part of a genre already depleted by 1908; born of cinema’s roots in low-brow theatre and magic. It has no more plot or dramatic build than a vaudevillian could provide by spinning plates. Filmmakers in Europe and North America made hundreds of these films, and by the time Modern Sculptor came along, audiences were ready to move on. And Modern Sculptor, by god, knows it. That’s why I love Modern Sculptor.
Who is the ‘modern sculptor’? He or she—in this case, she—is an individual who can sculpt hands-free. The process is mysterious, a conjuring as much as a labour. The result, though familiar as any statue you’d see in the gallery, is not fixed. The modern sculpture is more than it appears to be. It’s devious and unpredictable. It may get up and sneak away at any time, as the rigid works of the Ancient Sculptors never could. Anything is possible. 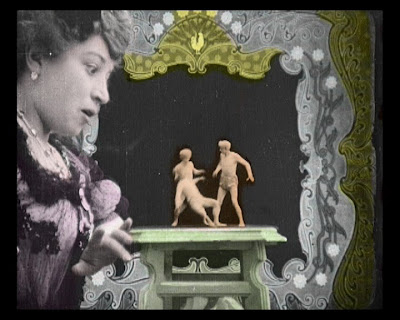 Modern Sculptor opens with the properly dressed artist (Julienne Mathieu) presenting her wares to us. (The print I saw, described as ‘stencil-coloured,’ has several hues.) Head held high by justifiable pride and a solid corset, Madame begins her exhibit: Up first, a series of pieces on pedestals, most of them inspired by Classical forms: male dancers in frozen poses; balletic maidens, rotating; wrestlers sparring; be-sworded Roman legionnaires hauling a wounded comrade. De Chomón’s skills are on display here, placing Mathieu in the left foreground while the sculptures—miniatures—occupy the middle. Were they actual miniatures, the film would be boring, but in fact, each figure is portrayed by an actor, caked in white. In some cases, the actors move; in other cases (delightfully) they attempt to be motionless. You don’t know what they’ll do until they do it. Maybe they’ll just stay still. This is sculpture as it can be, in the era of film.
In the second part of Modern Sculptor, Madame displays her technique. Or does she? She and her assistant (André Deed) disappear from the frame; only their hands are visible as they place globs of clay on a flat base. Now we’re treated to some stop-motion animation—‘claymation’—as these globs form themselves into, among other things: an eagle with flapping wings (spinning, on its own, to provide us a better view); a baboon smoking a pipe (the smoke is real); a crocodile, whose head and tail invert; and a lion’s head with lapping tongue. The basic techniques of claymation must have been established by 1908, because the results look perfect here.
Only for the final display does Madame step in, and only, really, because she has to. We see a cylinder of clay laid upon the flat surface, cut up (by an invisible blade) like a roll of pork would be cut into medallions. The segments slide one upon the other, stacking upward and forming themselves into the shape of an old woman. She sits in a chair to be admired, an obedient piece of art.
Then, she becomes a human figure (in masque, I believe). She begins to scurry away. Mathieu’s hands descend and surround her, squashing her (in the film’s least convincing scene, I’ll admit) back into a lump of clay. 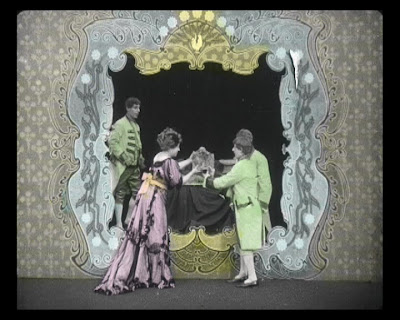 This last bit is the real ‘trick’ of Modern Sculptor. It’s a sly aside, a smirking, satirical statement about a medium on the cusp of greatness. Just what exactly are these things, these, movies? What are their fashioners up to and how do they work, such that they leave no trace of anything but the final product? What should we make of these images, nearly as convincing as those we see with our own eyes, but not to be trusted? Perhaps, not easily controlled?
These questions aren’t limited to the days before World War I. In our era of digital manipulation and home office post-production, the concerns embedded in Modern Sculptor remain urgent. And that’s part of what differentiates a valuable artifact from a piece of great art, like this one. The former shows us where we’ve been. The latter, where we’ll always be.
Where to find Modern Sculptor:
Modern Sculptor was screened live on March 30, 2011, as part of the Toronto Silent Film Festival. Accompaniment was provided by Bill Lasovich.
Posted by Chris Edwards at 4:34 PM