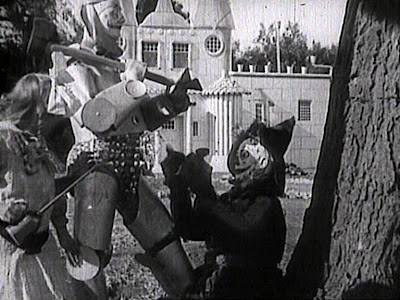 I love, love, love His Majesty, the Scarecrow of Oz, because it creates a world I cannot pull back from or forget. That world is cheap, corny, and shoddily made; but so what? Better that a film glory in what it is than strive and fail to be something else.

His Majesty was the second of only five features produced by the Oz Film Manufacturing Company. It was bookended by The Patchwork Girl of Oz (1914) and The Magic Cloak of Oz (released 1917), both terrible films. His Majesty shares some of their flaws: uninspired acting and direction, vague plot, near motionless camera—but its pacing is better, and for all their silliness, its characters seem to believe in what they’re doing.

You’ll know a lot of them. There’s Dorothy, that girl from Kansas; there’s the Scarecrow, the Tin Woodman and the Cowardly Lion, and the Wizard himself, all more or less intact, as per your memories. This is not the original story though.

Dorothy (Violet MacMillan) first appears as a captive of the witch Mombi (Mai Wells), who is not a Witch of the West, or any other direction, but more of a freelance caster of black magic. Upon escaping Mombi, Dorothy meets the Scarecrow (Frank Moore), and later the Tin Woodman (Pierre Couderc), who’s a bigger brute than Jack Haley could ever be, and resides in a castle made of tin. The Lion is an actor (Fred Woodward) in an animal suit. Woodward excelled at mimicking four-legged beasts, and plays several more in the film.

You may not be familiar with the rest. Besides Mombi, we’ve got King Krewl, the preening monarch of Oz, whose niece, Gloria (Vivian Reed), is in love with the gardener’s son, a boy named Pon (Todd Wright). Krewl disapproves. There is also a living sawhorse, a clever donkey, several more witches, and a boy named Button-Bright, who serves no purpose at all. 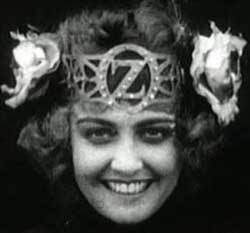 Pon needs to go, so Gloria can be married off for political advantage. Krewl has an idea: why not “freeze her heart” so her love for Pon is extinguished? He turns to Mombi for help.

Here’s how Mombi does it. She captures Gloria and ties her to pillar. With an incantation she summons three other witches (one in full demonic garb) and combines their powers with her own to create a cauldron-full of magic potion. Then, in a pretty sexy close up, Mombi pours a ladel-full of the stuff over Gloria’s blouse. Mombi now cups her empty hand just below Gloria’s breasts. A heart (imagine a stuffed heart in the shape of a real one) appears in her hand, and ices over. The now-frozen heart disappears, and Gloria’s capacity for love goes with it.

Wikipedia describes Mombi “pulling out her heart,” but that’s wrong. Nothing is pulled from Gloria’s chest. What we see is a figurative heart appearing, literally, in Mombi’s hand, then being literally frozen, so that Gloria will—figuratively speaking—be incapable of love, since hearts do not, literally, generate it.

His Majesty holds fast to this hybrid of theatrical and cinematic realities. Giant cartoonish animals spar with humans, with no contradiction, or even a Mary Poppins-style mixture of media, implied. At one point, Dorothy, perplexed at Gloria’s zombiefied state, presses her ear to the princess’s chest, then recoils from the cold. There is no verisimilitude in the film. There’s no sense of a passage of time either, nor geographical position, at least relative to any other position. All things are equivalent, so long as they share the screen. 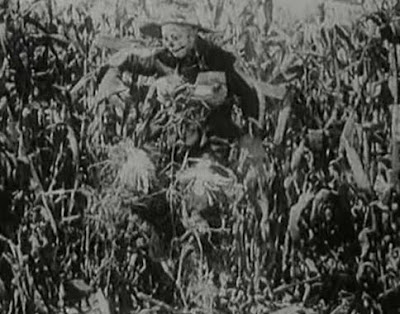 The actors wear costumes fit for a Halloween party, and perform as though they’re attending one. Imagine a guy dressed up like a king, spooning himself a drink from a punch bowl. You walk up to him and say, “Your Highness! Why are you getting your own drink? Where’s your servant?” And then he says, “We agree!” and puts on royal airs. That’s the level of acting you’ll see in this film.

If the sets, costumes, and events themselves defy reality, why should actors uphold it?

His Majesty isn’t all fun. Mombi rips the Scarecrow apart in one early scene, whipping his head and strawless carcass around like a sandy towel. The Tin Woodman later beheads the witch, though the results are temporary. Both scenes would feel out of place if everything else weren’t out of place in some way too.

At 60 minutes, with little character development and a rigid camera, the film ought to drag. It never does, because both its big scenes and its standalone comedy sequences are brief. In a more logical film, with a more logical world, the latter would be gratuitous and false, but this Oz has no mean; no standard—so everything belongs and nothing is too much. 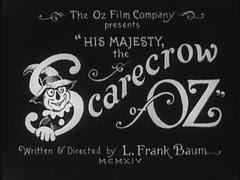 Late in His Majesty, the heroes must storm Kastle Krewl from the sea. “The Wall of Water,” an intertitle announces. We see the girl from Kansas, and the straw man, the metal man, the lion, and the rest, floating on a raft that gradually tilts upward. The actors cling to the raft in great terror. Then the raft, and even the water, tilt steeply downward. That’s your wall. Just a tilt of the camera. Cheapest effect around. But see if you don’t move your head.

Anything can happen in Oz, perhaps because the creators of Oz didn’t know what they were doing. But the result is still a unique, memorable, and most of all, intriguing place. Sometimes, it even awes.