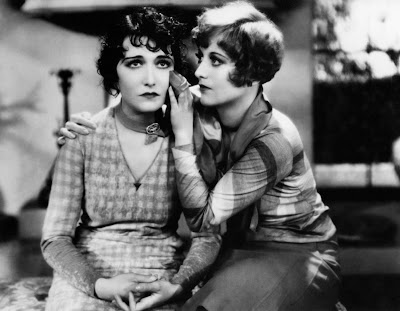 Sexual politics is tough enough today—I can’t imagine what it was like in the 1920s.
You might think I could. By now I’ve seen just about every variation of the male-female dynamic committed to silent film. But in a way it’s meaningless, because those relationships were idealized. They were reflective of what people felt they ought to be, or worse, what they were forced to pretend to be. The truth boiled underneath.
Nevertheless, the Gishes and Pickfords, in their guises of committed, suffering wives and premarital virgins, expressed something important. They expressed a high watermark of values against which average people could measure themselves—probably unfavorably—just as a starlet’s beauty expressed an ideal to be constantly approached, but rarely matched. I wonder: if one could be complimented for looking a little like Mary Pickford, could one also have been respected for being nearly as pure?
Nobody’s perfect.
But you always wonder what people thought, because the official line, so much of the time, at least on film, was no to vice. Oh there was innuendo, and some damn sexy actresses toward the end of the silent period (time for your close-up, Greta and Louise), but the idea of a woman both heroic and easy was really not a Silent one. I can’t name too many films pre-1929 that seriously challenged traditional sex roles, at least all the way through the last reel.
I’m not sure Our Dancing Daughters does, either. But I’ve written you a three-paragraph preamble to it because, if nothing else, the sheer confusion of values in this film tells us something. Maybe the only constant in the Jazz Age was confusion—the mashing of traditional values with emancipatory glee; indifference, guilt, rage, nihilism and sexual abandon embraced in equal measure; maturity blurred with selling out. I loved this film, readers. I loved it to its chaotic core and I don’t know, or care, how much of it was that way on purpose. 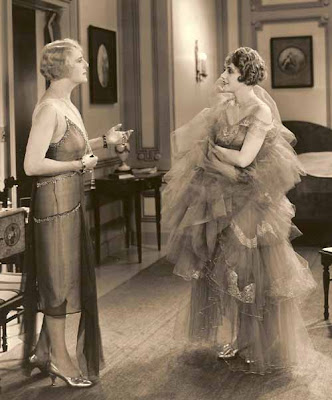 Joan Crawford—more fresh-faced than you’d recognize, but already a star—plays the heroine. She’s Diana, a rich man’s daughter blessed with great beauty and magnetism. She’s the girl everyone wants to be around. I’ve seen enough of Crawford’s silent work to call this her gift. She was not enigmatic, like a Garbo, nor was she the flake that Clara Bow’s heroines tended to be; she seemed approachable in a way that belied how desirable she was.
But there’s more. For Diana, despite her wagon-train of male admirers, still tries too hard. “I'm known as Diana the Dangerous!” she announces, early on, to prospective beau Ben Blaine (Johnny Mack Brown), at a night club. That’s quite the nickname, and it would imply a lot… if someone else had given it to her. But what if a woman gives it to herself? And what if she says it while holding a tuxedoed hunk tight on each arm, like some luxurious fur coat made out of men? And what if she moved in to kiss Ben anyway?
Diana has a reputation alright, but has she earned it? Should we even care? The film isn’t sure. Her chief rival for Blaine’s affections is a Good Girl named Ann (Anita Page), but Ann’s not a way for the film to lecture us on Diana’s failures. Ann is a shallow snot. She has saved herself for marriage because she believes purity is the best way to land a rich husband.
Ann views decency and restraint as means to an end—she does not view them as worthwhile unto themselves. And so she does not recognize their capacity to make her a better person. Ergo, she’s not that good. But she’s no more a hypocrite than the dozens of society folk who judge her favorably—who demand no more of her than the surface goodness she earnestly maintains. When she blows up and calls Diana a slut (yes, really), she’s being true to their code of values. In an older film, Ann would have been the victim.
Ben is a handsome but bland figure; motivated by what he thinks he ought to do. He’s passionate, but he seems able to shift that passion from femme to femme—the way a flashlight can be switched on and off and directed at any target with equal intensity. Both Ann and Diana seek to manipulate him, but by different means. 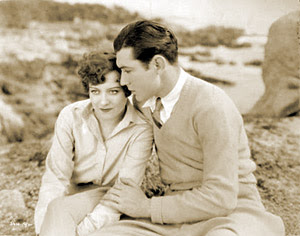 In between—wedded, but always available for a chat—is Bea (Dorothy Sebastian). A truly decent soul, Bea once earned the bad reputation Diana only flirts with. Her transgression may have been no more than a pre-marital lay (we never learn), but it has left her marriage permanently fraught. “I love you—then I hate you—then I love you again—” her husband declares one day, before storming out of their house to brood.
Bea sums up Our Dancing Daughters’ remarkable inner turmoil. She illustrates the dangers Diana faces, but she’s an object of sympathy and affection at the same time—and the one we trust most. We believe she’ll never live down her mistake because she says so herself. We believe Diana is still a virgin because Bea says that too.
With Bea watching from the sidelines, Ann and Diana battle it out for a man less interesting than either of them. Their goal is marriage, because that bond, once forged, is unbreakable. But this too is strange, because annulments were possible even then (Crawford’s Our Modern Maidens, made only a year later, details one). And for Ann, there may be no such thing as a permanent defeat anyway.
Diana learns, though. “Because I was a woman—not a lying imitation—you decided I was unworthy,” she says, finally, in the third act. “But I thought there was nothing finer than truth—and I still think so!”
Perhaps she’s simply learned to be herself. Maybe that is all the film intends. But Diana is still Diana: She’s still fun and free, and ready for new adventures. And she’s a woman. The term belongs to her; it describes her, without qualification. She’s made it her own.
No one tells Diana what to be. 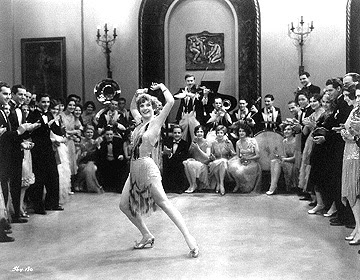 Where to find Our Dancing Daughters:
Our Dancing Daughters can be viewed as a made-to-order DVD, purchased online from the Warner Archive Collection.
If you enjoyed Dorothy Sebastian’s suffering sweetheart role here, be sure to check out Spite Marriage (1929), in which she plays the opposite. Her Trilby Drew is one of the meanest women around.
Posted by Chris Edwards at 9:54 AM