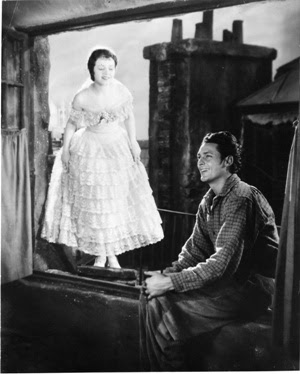 There’s a lot of climbing in 7th Heaven—up winding stairs to loft apartments; up rungs from the sewer to the street. The symbolism is literal: it’s about escaping depths for the light, for good. It’s about achieving a better life.

The vertical momentum of its leads: Diane and Chico, make 7th Heaven a gushy crowd-pleaser. One of the highest-grossing films of the silent era, it’s loaded with the kind of rhetoric you’d find in any self-help book today. “I’m a very remarkable fellow!” declares Chico, repeatedly—with the grin and swollen chest of a man who believes it, even while raking out blockages in the sewer. And to Diane (Janet Gaynor), whom he finds on the street, a depleted human heap of misery: “The trouble with you is you won’t fight. You’re afraid!”.” Easy for big Chico (Charles Farrell) to say—but his confidence is infectious. She loves him as soon as she’s able to, which is long before she loves herself.

Diane must come out of her shell first. Her face, in the moments after Chico meets her (only minutes after she’s been nearly killed by her alcoholic sister, Nana, played by Gladys Brockwell), is a mask: immobile, dead eyed, unresponsive. She’s a suicide-in-waiting, totally enclosed. We’ll see her open up in time, but it will not be the unfurling other actresses might have made of it. Gaynor just seems to switch on.

What kind of strength does Diane have inside? And if 7th Heaven is her story most of all, is it so much about finding heaven as it is about finding the strength to withstand hell? For all Chico’s big talk, we suspect that, like most braggarts, he’s insecure. Diane, though, barely says a word. In a remarkable early moment, she and Nana are visited by a wealthy aunt and uncle, just returned from the South Seas, who promise to elevate them from their life in the slum, so long as they’ve been good. Suspicious, the uncle asks Diane, not Nana, to be candid with them. And Diane, guilty that they’ve stolen to eat and drink, admits they have not been good, thus blowing the deal.

Director Frank Borzage, who places this straight arrow in an Expressionist world of angles and twisting wood and metal, deliberately gives us an ‘ending’ first. Then has Diane reject it. The way out is not a matter of means, or of luck. It is not about fortune in either sense. The way out is within. 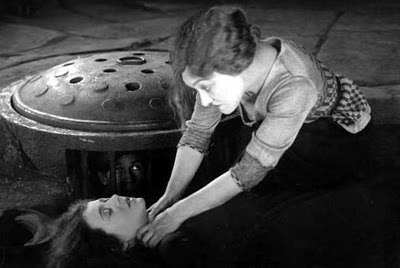 Unsubtle, without a subplot—without, even, a traditional second act—7th Heaven makes all of this clear, right from the start; and yet, the lives of the two leads improve so fast, materially speaking, that it can be missed. Key is Gaynor’s first scene. She’s introduced to us on the floor, being whipped by her sister, cringing and crumpled, with her dark hair covering her face. Nana barks at her to go get some absinthe. Diane leaves the apartment. But she pauses for a moment, looking up. Hair now away from her face, Gaynor poses—and Borzage lights her—as a classical starlet. Then the moment’s gone. But we remember.

I haven’t mentioned that the whole thing’s set in Paris, and both Diane and Chico are French. As in most silent films, nationality is irrelevant here; until fairly late. After much sweet and gentle comedy, during which we never doubt that Diane will prove loveable and indispensible to the blustering Chico—after they consummate, with their eyes, everything we expect them to—the War comes. Now it does matter that we’re in France, because it is the Germans who are advancing, and fast, and Chico must leave for the front, very, very soon. In an hour.

They make a promise right then: to pause every day at 11 am, no matter where they are, and turn their thoughts to the other, and recite, “Chico…Diane…Heaven.” Schmaltz in a lesser film, no doubt; but Gaynor and Farrell make it work, through their honest portrayals. 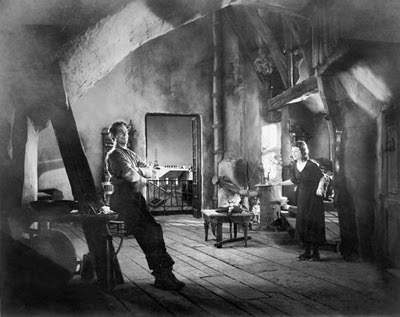 I think Diane and Chico really do keep their 11 am promise, though it’s difficult to know for sure. Borzage, who filled the film with the couples’ first meeting, their disagreements, flowering of love and finally domestic comfort—each moment overlapping the last like the ends and beginnings of songs in a dance club—now crosses four years of separation in one go. Giving us no time to adjust. 7th Heaven also trips here, turning from the couple entirely to deliver a climactic battle scene that cannot be the climax of anything, since it’s the couple, not Paris, we really care about.

Still, there is mortal danger behind it all. It will dawn on you, by this late point in the film, that Diane has become a woman capable of withstanding crushing loss. But you’ll also know, by now, that 7th Heaven is an extreme fantasy, in which conventions of storytelling may be subverted, and the emotional needs of the audience seem to dictate events more than the other way around. Put simply, anything is possible.

A spoiler, following the photo… 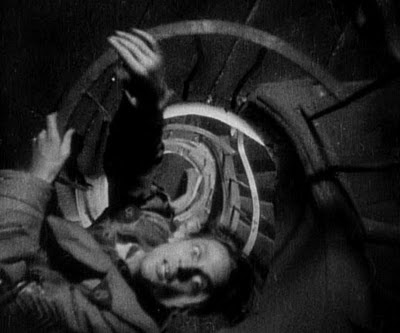 Chico, we’re told, is dead. Confirmed dead, even in writing. But Diane barely has time to weep before we see Chico barreling his way through the crowd of Armistice revelers to reach their home, and her. He’s blind, so this scene is impossible. When he bursts through the door, wide eyed and staring into his own blackness, it’s as though he’s occupying a different plane. Now watch Gaynor fall into his arms. Watch her fall through them, clinging instead to his legs—an action that tricks us into thinking he’s incorporeal. “I’ll never die!” he tells her, as Borzage bathes them both in the light of God.

Diane can handle anything now, we know.