I may have done a bad thing the other day. You tell me. Here’s the story. 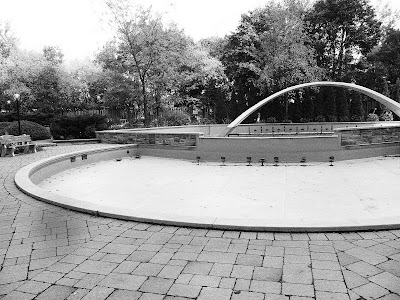 The apartment building I live in is part of a crescent-moon cluster of once-beautiful towers, facing outward to houses and parks, and inward to a fountain. The fountain is currently waterless. From ground level it looks like the Parkette of the 1990s, adjacent to the Orbital Mass-Transit Spaceport of 1990s, as imagined in 1956. The Benches of the Future need paint, and Tomorrow’s Drainage is a little brown. 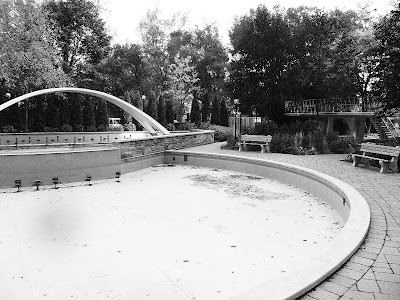 My questionable act did not involve this fountain. It involved, sort of, the parking lot flanking it. There’s a driveway that circles the fountain entirely, allowing access to all buildings in the crescent-moon. But only on one side is it wide enough to accommodate cars parked on an angle. This row of diagonal parking spots stretches downward (technically south-westward), past the fountain, past my building, past the organic garbage bin and its many flies, right out to the street.

Approaching from the street, in your car, squinting ahead, you might think it possible to drive the full length of this lot, right past the choked space immediately post-garbage bin—and onward, to the dimly spied Promised Land of fountain-side angular yellow lines. But you’d be wrong. And by the time you knew why, it would be too late. It’s a trap. 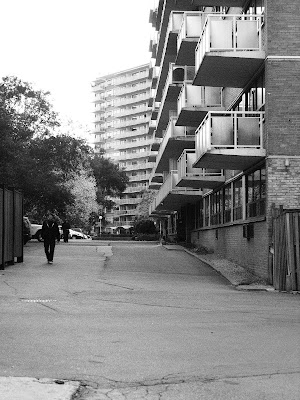 You’d call the thing diabolical, if ‘diabolical’ didn’t imply pre-planning—or at least bylaw-approved landscaping—in the name of evil. There is no deliberate malice behind this stretch of lot, which draws in cars like a pitcher plant at its open end, then grows narrower, and more cramped, before terminating in a length of chain, slung perpendicular to the driver’s intended direction. The whole thing’s just badly laid out. You can go no farther. Though, cruelly, you can see the fountain-side spots quite well.

You’ll also have a hard time turning around. A three-point turn, in this space, is about 15 points shy of adequate. Once you’re in, you’re in for a while. 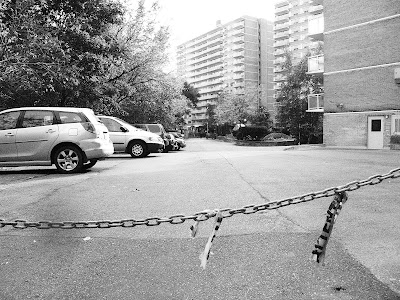 Imagine the frustration, as you realize you weaved your way into a dead-end, made so only by chain and a metal post. You sit there, tapping the gas, adjusting your car backward by inches, while pedestrians stride past or over the chain, and past you.

Many of those pedestrians are coming from a particular exit—kind of an odd one. You see, the ground floor of my building is actually slightly underground. Leaving the building at parking lot-level means climbing up some steps to an exit. One of those exits puts you just on the other side of the chain.

The steps for this exit are outside. They are the way out of a shallow concrete depression—in practical terms, a ditch—from which the building residents emerge, like joeys from a pouch. 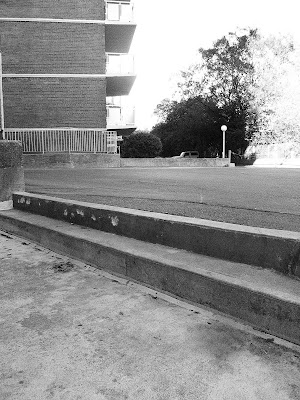 I don’t use this exit much. I don’t have to, since I live in the sky, and can hurtle downward in my elevator to the second floor, then take different stairs, in a different direction, to a different exit. But the Pouch is close to the mail room, and there are times when I’ll use it for that reason.

Yesterday, at about 1:30 in the afternoon, I got the mail. And having accomplished that feat, I decided to reward myself with a cup of delicious coffee from one of the franchised chains on the other side of the park.

I crossed the hallway and reached the door just as a pretty young lady with cocoa skin did the same. I held the door open for her. She gave me a big smile and went through.

I followed her. And the first thing she said to me, as the sun hit my face, was “wow.” Because she saw, just like I did, a black sports car with one front tire slung over the corner of our concrete ditch.

The car, now on a tilt, had been driven partway into the hole. It was undamaged, but absolutely, hopelessly stuck. No gunning the tires; no 18-point turns could’ve freed it; no car, so long as it was shaped like a car, could escape that spot without a tow truck.

The lady strolled on, toward the garbage bins.

Clearly, she wasn’t an Amateur Photographer like me. Here was a unique scene, on a bright day: a diagonal shard of black, tinted windows and all, tipped against flat, horizontal white. And while I didn’t have my camera, I did have The BlackBerry. It was meant to be.

In the distance, I saw the lady turn around. Watching an artist at work, I thought to myself. The shot was hard to capture, since the subject was big and there was minimal space to back up. I did a lot of sidestepping and kneeling, trying to get it all in, watching the image float and bob on my little viewscreen. Then…

“Can I help you with something?”

…came a voice, from the car.

I hadn’t seen the driver. The tinted windows blacked him out completely, but once I heard him, it was obvious he was there. The exchange that followed was immediate, and thoughtless:

Driver: Yeah? I guess you find this amusing?

Me: [Pocketing BlackBerry and walking away] Well, since I’m trying to take a picture of it, I guess I do. But it’s nothing personal.

What a dick I was. But an honest, forthright dick, perhaps. As I wandered on toward the coffee shop, I thought about what I’d done wrong, and maybe, even, if I’d done anything wrong at all. 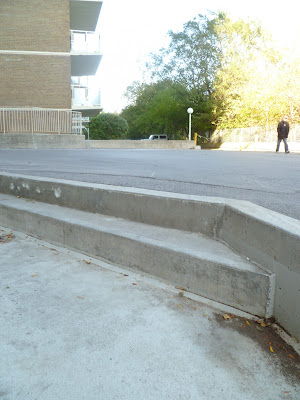 Consider this: Had I known the man was in the car, I wouldn’t have tried to take a picture. Why? Because I would have concluded that, while the scene was funny to me, it sure-as-hell wasn’t to him. Who wants to rub it in?

But when I say it was funny, I’m being serious. The photo, had I managed to snap it, would have been the kind your co-workers email to you in a themed-batch, along with a dozen other pics of non-lethal parking fails. No one we know was impacted, so we laugh at the absurdity of the scene. Everyone’s anonymous.

Trying for that picture, I stepped into an ethical seam. I thought I was a passive observer, unobserved myself and unable to do harm, and so all that mattered was what I could gain from the situation. The driver, though, was present, and because of that, I was offensive. I just didn’t know it.

Did I even feel bad about it? Maybe so, and that’s why, when he asked me if I found it all amusing, I admitted I did. This sounds like the worst part, but really, it was just an avoidance of hypocrisy. Of course I found it amusing. If I’d said “no, I’m sorry,” I would have been a liar. And still a dick.

I convinced myself of all this as I walked on. But it wasn’t easy. It took awhile. I had to walk father than I’d planned. Down, past the park, past the first coffee shop and on toward a second one. That’s when I saw the cocoa-skinned lady again. She was still walking ahead of me.

She was there, cross my heart.

And I could have caught up to her by quickening my steps just a bit. And I wanted to, suddenly—just to tap this stranger on the shoulder and tell her: “you know, I didn’t see him in the car.” But, she’d say, that was only because you stopped to take the picture, instead of walking past the car door, like I did. He wasn’t so hard to see then.

Five feet ahead of me, she made her turn, and was gone.

I never knew her, or the driver. I don’t even have the picture. But both of them have a picture of me.
Posted by Chris Edwards at 11:46 AM