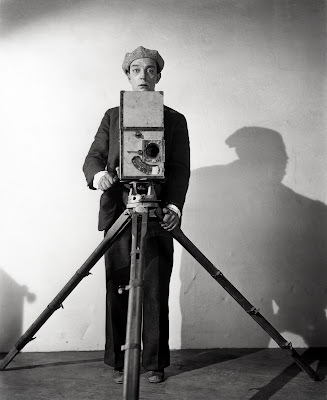 The more I know about events in an artist’s life, the more tempted I am to find them expressed in his or her work. This can go too far.

For example, I know that Buster Keaton signed a disastrous deal with MGM in 1928, trading artistic freedom for monetary security. I also know that his career, marriage and even sobriety were compromised within a few years of that deal. I’m inclined, then, to fixate on certain moments in his MGM films that might depict the artist’s inner pain, as artwork tends to do.

But is this real? Or am I simply manufacturing meaning, based on knowledge I’m bringing in from the outside?

The true hallmark of a collapsing artist isn’t brilliant expressions of pain—it’s bad art. Keaton’s second MGM feature, Spite Marriage, is one of his worst silent films. The talkies that followed are beneath him. But his first MGM silent: The Cameraman, is one of his best.

Given that, what do I make (or what can I make) of this film’s central and recurring gag: the image of Buster swept up and overwhelmed by storms? Storms of rain, or paper, or humanity—barreling over him, burying him, threatening him, carrying him away? Is this how Buster felt?

The Cameraman is one of Keaton’s grimmest films—the first in which the world is not just inscrutable, but deliberately cruel. 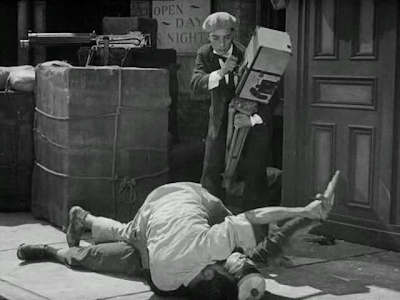 Keaton’s hero, an impoverished photographer named ‘Buster’, sells 10-cent ‘tin types’ on the street. “They make great ashtrays” he tells a poser, early on. Think about that. Suddenly, Buster is caught in a blizzard of ticker-tape and human bodies, some of them photographers, jostling long-legged wooden movie cameras, and amidst this chaos he is pressed, nose to lovely neck, against Sally (Marceline Day). Buster is smitten.

The crowd disperses. Sally leaves. Now Keaton is alone, standing upon the paper and garbage and the rest of the dregs of excitement.

This scene is tremendous. But it felt, to me, like something Charlie Chaplin would have shot. Keaton’s characters are often men low in society, yes, but they’re still part of it—it’s the Tramp who’s outside society altogether.

Sally’s different too. She’s a sweetheart. She’s a secretary at the MGM Newsreel office who encourages Buster to buy a real movie camera and get a job there. She feeds him tips about breaking stories, so he’ll be first onsite to shoot them. She gladly accepts a date with him, despite attention from several better-looking, more successful men.

Keaton’s love interests aren’t usually this nice. Most represent an obligation; several issue ultimatums that get him in trouble—the most lethal example being The General’s Annabelle Lee. These women aren’t really worth Buster’s time, since they won’t accept him for who he is. And that makes his quest, done on their behalf, absurd.

It also insulates us from true sadness. In The Cameraman, we root for Buster’s love in a way we can’t in any of his other films, because Sally’s not only desirable and attainable, but also likable. She wants him to be more than he is, but takes an active part in helping him do it. She invests in him. When it seems that he’s lost her (and it does, several times) the feeling is gut-wrenching—for us. 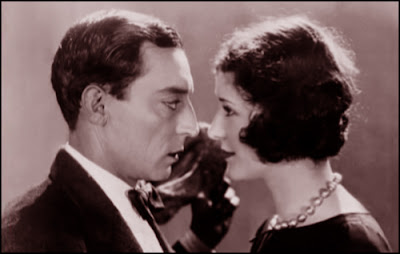 One of the reasons Keaton’s humor seems fresher than Chaplin’s today is that it so rarely asks modern viewers to commit emotionally. It is detached and cynical; ironic, sarcastic. As are we. But The Cameraman is not. In a Venn Diagram of Slapstick Genius, it occupies a point of overlap between Chaplin’s circle and Harold Lloyd’s.

Supposedly, Keaton was allowed to improvise only two scenes in The Cameraman; the more famous being one in which he mimes a baseball game in Yankee Stadium, by himself. This scene is self-contained. Perhaps it was an act of rebellion against his micro-managing studio bosses. Or maybe not.

Yes or no, the scene feels out-of-place. Its camerawork is fairly passive; the focus is on the star, who creates an extended routine—out of nothing—using his physical gifts. It is traditional Keaton.

And, it’s atypical of this film, which often makes you conscious of a director’s hand. There are lots of dramatic close-ups in The Cameraman (or so it felt). There's a sequence in which Buster zig-zags up and down flights of apartment steps so smoothly that it’s almost beautiful--because the camera flows upward and downward too. And the scene of the ticker-tape storm is about the storm, as much as the man it obscures. 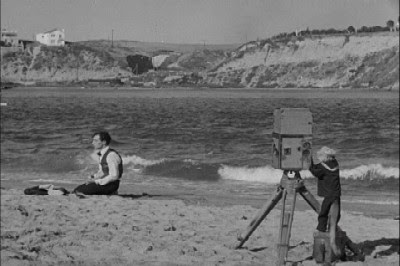 Where does Keaton fit into his own film? He is the very funny, but very wounded centre of it. I could write paragraphs more about the moments that balance these two sides. My immediate memory is the scene at the public pool, where Buster loses his swimsuit and has to keep Sally occupied without exiting the water. It’s a riot, but underneath is a threat of humiliation that goes beyond public nudity.

You see, it’s one thing for Buster to run bare-assed through an aquatorium. It’s another for him to accidentally flash the girl he loves. But here’s the real stress: as Buster stays submerged up to his chin in the pool, other men crowd around his girl. Bigger, stronger, richer men. Here, the consequence of Buster’s situation is not simply embarrassment, but agonizing, emotional loss. Destruction of self-worth.

This undertone makes The Cameraman Keaton’s most complex, human film, if not his most creative. Among his features it ranks near the top, alongside The General (1925), and The Navigator (1924). But it was the beginning of the end.

I could make the case—but choose to believe, either way—that he could feel it.

Where to find The Cameraman:
The Cameraman is available on DVD through TCM—part of its Buster Keaton Collection, packaged with Spite Marriage and the early Keaton talkie, Free and Easy (1930).
Posted by Chris Edwards at 7:21 PM