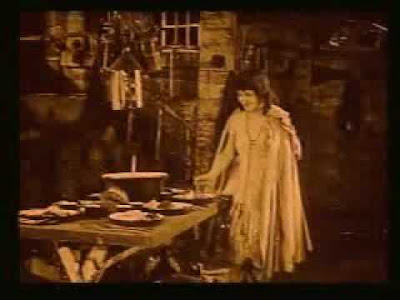 Cinema prior to 1916 was the bastard child of the stage. The fixed camerawork, mannered acting and phony sets of this era make that impossible to forget, even for a moment, and indeed, it was not something anyone wanted forgotten, because a connection to legitimate theatre was what most quality filmmakers aspired to. Before The Birth of a Nation (1915) and other super-epics began displacing theatre as the supreme populist entertainment, there was no better endorsement.

Filmmakers had to find their own way. They had to learn how their art differed from stagecraft, then learn to love it for those reasons, then learn to exploit it to do great work. But good films could be made by men and women who hadn’t learned all those lessons yet. I’ve seen several. Snow White is one.

Produced by Adolph Zukor’s Famous Players Film Co. (“Famous Players in Famous Plays”), Snow White stars 33-year old Marguerite Clark in the lead role, playing a girl of perhaps 15. I never noticed the disparity, but even if I had, it would not have seemed jarring in a film that builds most of its imagery from stage techniques, and seems indifferent to how fake they look before a lens. The nearly middle-aged Snow White is hardly out of place beside a man in a cat suit or seven dwarves played (I think) by children. And why nitpick when the staginess works well, such as the early sequence in the court of Snow White’s evil stepmother (Dorothy G. Cumming), where Snow White is in need of better clothes and her maids of honour whirl to her rescue, surrounding her like grapes around the stem while she takes a bit of clothing from each one? The camera stays still for this bit of theatre, but—crucially—there is something interesting happening in front of it. Snow White, at just over one hour of surviving footage, is not boring. 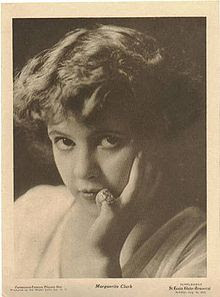 Cumming is also front-and-centre in two of Snow White’s progressive moments. First, there’s her knowing glance at the Huntsman (Lionel Braham); the man who stands opposite her with a crowd of courtesans between them, and ordered, as only he and the Queen know, to murder Snow White. For everyone else in the scene, it is simply Snow White’s bon voyage party, and the positioning of the actors is much as it would be on a stage. But the Queen’s glance would be hard to detect from a theatre seat. It’s very compelling, and I call it a filmmaker’s victory, because the stage could not do it so well. 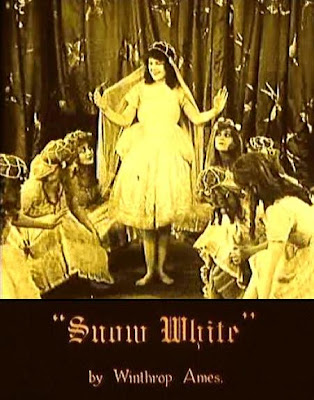 Likewise, it’s to cinematic techniques, not theatrical ones, that we owe the success of Snow White’s most dramatic sequence: the girl’s near-death from a poisoned comb placed in her hair. Cumming, in the guise of an old peddler, stands over Snow White, counting to one hundred. The Witch has told her (and us) that one hundred seconds are all that’s needed for the poison to kill the girl. “Twenty-six—twenty-seven—twenty-eight—twenty-nine—” reads the intertitle, then we cut to the dwarves in their mine, unaware of Snow White’s plight. “Eighty—eighty-one—eighty-two—” reads another intertitle. This cross-cutting builds real tension in an otherwise benign retelling of the tale.

There’s more. Imagine a beautiful closeup of Clark’s face, framed by the heart-shaped window of the dwarves’ front door, now zooming out through a kind of iris shot of the room’s interior as she enters it. Moments like this somehow co-exist with a late sequence in which comatose Snow White is laid out on a table made of brambles, centre frame, while the dwarves march in staggered rows before and behind her, just as they would on a deep stage. It’s this ebb and flow between the filmic and the theatrical—and the fact that both approaches are executed well—that so intrigued me about Snow White. The first scene draws all its power from the camera; the second, none at all. The first is the future of film; the second, its past, but they both work. And so does Snow White.