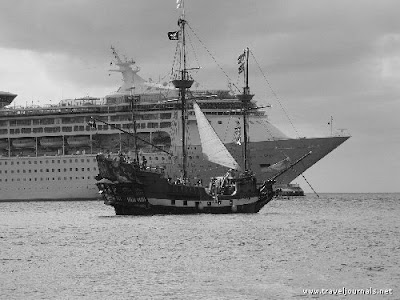 The Ship of Lost Men is a mediocre film with a great ending, and that’s a problem for me. First, because I try not to reveal endings (though I’ve never sworn anything to that effect); and second, because the ending of this film is both its salvation and the best summation of why it fails. So here’s what I’ll do: I’ll describe the scene without context—its architecture but not its intent—and hope that’s enough to make my point.

Imagine a rotten little cargo ship, bobbing in the Atlantic. The night’s been a dramatic one for all aboard, and it’s not yet dawn when they gather on-deck, disheveled, confused, and now blinded by a great light from above. It’s the glow from an immense luxury liner, several storeys tall and dwarfing their craft. Row after row after row of wealthy gawkers line its railings, looking down at the ship’s measly crew like spectators in the Coliseum. The crew, who’ve spent nearly two hours of film-time scuttling through the bowels of their ship, committing debaucheries and big betrayals, seem minor now, as do the stakes they struggled over. Their debaucheries were petty; their betrayals netted tiny gains. Those of us in the audience knew it all along, and now the people aboard this luxury liner—an audience within the film—know it too. They stand in for us.

The Ship of Lost Men (alternate title: Grischa the Cook) gives you lots to look at, but aside from this late moment, very little to savor. Captain Fernando Vela (Fritz Kortner) is a cynical barnacle who sells passage aboard his ship to escaped convicts—they pay him what they can and work off the rest as deck-hands. Consider the risks involved in manning your ship with such people, particularly if they are desperate strangers like Morain (Gaston Modot); a thug on the run who thinks paying Vela should be more than enough to earn him cover. Surely the Captain is courting his own demise. He could have made an interesting character if Morain didn’t throw him overboard shortly after the ship leaves port.

Morain himself makes an interesting captain. He’s got no interest in taking over Vela’s trade—he just wants to divide the ship’s cargo among the crewmen, hit the shore, and disappear. But what authority does one mutineer hold over twenty others? What’s to stop them from dividing the loot twenty ways instead of twenty-one? Morain is a tough brute, but he’s in trouble, and a movie exploring the depths of his situation could be a good one. But The Ship of Lost Men can’t be that film, because it needs Morain to retain his role as undisputed leader of the rabble—the man who can articulate the collective threat his crew presents to William Cheyne, a recently shanghaied American doctor, and the beautiful, wealthy, and fearful heiress, Ethel Marley.

Cheyne (Robin Irvine) is a slight man of strong character—not a good combination on a ship like this one. He makes enemies quickly, despite the inherent value of his skills, and puts himself at even greater risk when he helps haul Ethel (Marlene Dietrich) out of the ocean and tries to hide her from Morain and his less-controlled, slathering crewmen. Ethel is naturally grateful, and the pair fall in love under the threat of discovery, gang-rape and murder.

As a friend of mine pointed out, Ethel could have been playing the Doctor the whole time—encouraging his affections to ensure he’d keep her safe. But I doubt it, because this lady does little to guide her own destiny otherwise. It’s amazing to see Dietrich, only a year away from The Blue Angel (1930), playing a woman this mousy. Had she brought an early version of Lola-Lola onto that ship, we’d have something to talk about. 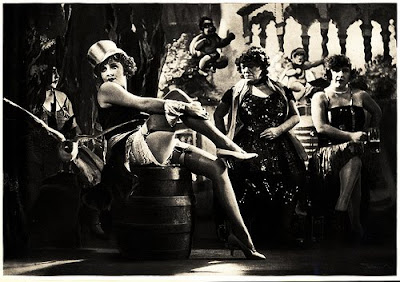 Ethel’s presence is soon discovered, which comes as no shock, since hiding anyone on that tiny tub would be next to impossible. And that’s much of the problem with The Ship of Lost Men—the sense of inevitability every scene carries, because every scene is predicated on silly assumptions. Can Vela seriously expect to survive a crew full of criminals? Can Morain accomplish what Vela couldn’t? Can Cheyne rely on his unhoned instincts and a sympathetic cook to conceal Ethel indefinitely, especially when he’s under suspicion himself? I’ll grant you that Cheyne’s case is borne of desperation, but as the audience, we judge not only his decisions, but the screenwriter’s too, and the screenwriter put Cheyne on that boat, and Ethel in the water.

So I’m left looking down on these characters from a luxurious perch of my own. They were entertaining, but only in a small way, and already I’m forgetting them. The film itself, though, I’ll remember--because The Ship of Lost Men is a rare movie that deliberately diminishes itself. I appreciate its honesty, if nothing more.

***Thanks to Caren Feldman of the Toronto Film Society for screening this film. It’s a rare one, and even finding images of it online is difficult. As you probably guessed, the picture at top is not an authentic still.
Posted by Chris Edwards at 1:08 PM