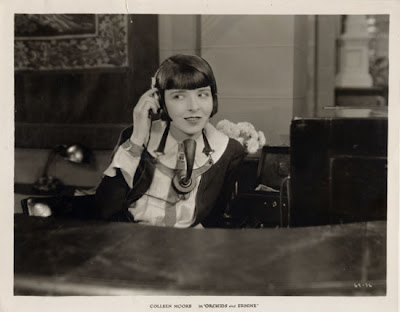 ‘Pink’ Watson hooked me about three minutes into Orchids and Ermine. It was the scene where she wraps a white cat around her neck like a mink stole. This is a woman who has nothing, but knows exactly what she wants.

Why ‘orchids and ermine’? Because they're both are items of luxury--two of many (along with the stole) that Pink plans to be swathed in once she marries rich. Step one, then, is finding a rich man to marry. For Pink (Colleen Moore), this will mean goodbye to her receptionist job at the cement factory, where everything and everyone, including Pink and the men she meets, are covered in dust.

Rich people prefer the city, so Pink will find a job there. She'll work at a luxury hotel, right out in the lobby, where a cutie like herself will be easy to spot. And she'll operate the switchboard. Then everyone’s business will have to go through her.

Is Pink a gold-digger? I don't think so. Money isn't all that matters to her. She’s simply a woman confident enough in her self-worth to demand the best, and while she has little money of her own, minimal social position and average looks, she’s also too smart and determined to be denied.

Just compare her to her best friend, Ermintrude. If Pink’s best weapon is her wits, Ermintrude (Gwen Lee) is unarmed. She is the hotel flower girl and (implicit) slut, viewing marriage as her first and last step to easy living. She also gauges a man’s wealth by how much he spends, and so throws herself at the most ostentatious cads she can find. This is bad strategy. Her dates are more like deals, and the men want payment upfront.

Not that we should judge, of course. The desire both women have to marry well makes them no different from thousands of other people populating the silent screen, and the realms of theatre, literature and legend for centuries before that. None of them said they were marrying for money, but the ones they won over were always well-off. Even Cinderella had it both ways, and you couldn’t blame her for being pleased about it. Pink differs from Ermintrude, and all the rest, only in her self-reliance. Yes, she wants a man’s money, but she’ll determine exactly how he gives it to her. 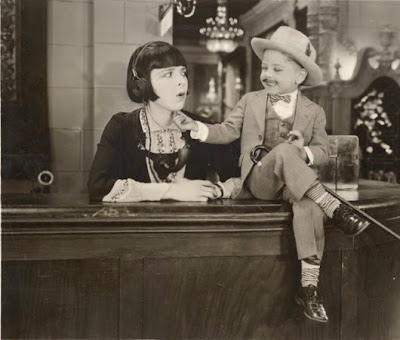 That's Mickey Rooney playing the vertically-challenged gentleman above. He was already a five-year show business veteran.


Seems like I’m writing more about Pink than the movie she’s in. That's because Orchids and Ermine is such a clear star-vehicle for the popular Moore, who’s in nearly every scene. Any number of actresses could have played Pink, but none could've done it with more snap than Colleen Moore. She imbues Pink with a rascally charm that makes her lovable no matter what she does.

The story surrounding her can be summed up quickly. Pink’s hotel is visited by the youthful, bookish Richard Tabor, whose fames precedes him thanks to a windfall in the oil market. Tabor (Jack Mulhall) is anything but a playboy, yet he’s deluged by one starstruck femme after the next, all eyeing his huge bank account. Tabor’s so weary of the chase that he devises a plan to switch places with his driver, Hank (Sam Hardy), a man who’s happy to take control of Tabor’s blank cheques and unsought attention. Pink falls victim to the millionaire’s ruse, but the whole thing becomes more of a problem for Tabor than for her. It is Tabor, not Pink, who ends up giving chase, protesting that indeed, he is who he says he is now, not who he said he was the day before—and all to win the hand of a woman who’s supposedly trying to land a rich man at any cost.

It's all quite fun--just insubstantial. The direction is fine too, and the supporting cast is able to a man, but Orchids and Ermine remains strictly a formula comedy, in service of its star. 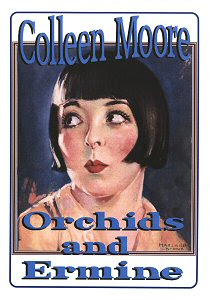 That's about all I've got for Orchids and Ermine, except this: I wish it was a talkie. The film has waves of Jazz-Age one-liners, most of them delivered by Moore, and her banter translates into dozens of intertitles. Too many. Pink had a lot to say, and even two years later, that mouth would have roared, and roared loud.

Speaking of talkies, Sam Hardy had a supporting role in one of my all-time favourites: King Kong (1933).
Posted by Chris Edwards at 9:55 AM