I’m no critical theorist, but let me propose this maxim, and see if you agree: A comedy can’t work unless it’s set in a world that viewers or listeners can believe in.

For slapstick comedy, that might simply mean a world where physical principles, such as gravity, are respected. A Chaplinesque figure who falls off a cliff, only to bounce like a ball when he hits the ground, is not funny, at least if he feared to fall in the first place. In a comedy of manners, where misunderstandings, bad timing and offensive behaviour drive the laughs, an audience must recognize enough of their own world, and their own values, to appreciate the situation. And satire, without basis in a familiar world, has nothing to work with. Now, I’m not saying a weird or unlikely character can’t be funny, but I am saying that character needs a more normal world to be weird in.

Okay then. Assuming you accept this premise, let me tell you a bit about The Doll House Mystery. The Doll House Mystery is 30 minutes of D.W. Griffith-inspired cinema; a comedy that turns heavy; expertly crafted and perfectly paced, spawned in farce, maturated as caper, and terminated with action. In every respect it is state of the art for 1915, and yet, if directors Sidney and Chester Franklin were as successful in generating laughs from their audience as they were in every other aspect of this film’s production (a reasonable assumption), then The Doll House Mystery scares the hell out of me. The world it depicts—the world its audience must have recognized as its own, if only somewhat exaggerated—is a terrible one. It is one in which the ties binding one man to another, and holding the upper and lower classes together, are stretched taut and thin, ready to snap from the slightest increase in tension. It’s a world where guilt is presumed and those capable of meting out punishment do so at the behest of the rich.

On with the laughs. The ‘doll house mystery’ in question concerns a missing stack of bonds—a serious chunk of change belonging to a wealthy man, whose innocent little daughter spends her days playing with an equally innocent little boy who lives nearby. The little boy is son to a labourer, who is a single dad and also an ex-con, though fully reformed. The girl and the boy conjure various states of make-believe in the girl’s ‘doll house,’ which is actually a detached shed, and more like a club house. I told you her father was rich.

The little girl sees the stack of bonds, admires their ornate design, and decides they would make beautiful wallpaper for her doll house. So she takes them, having no idea of their value. The girl’s actions (unlikely, but hardly implausible) then trigger a succession of unlikely (but hardly implausible) events. First, her frantic parents phone the cops, who, though far from the Keystone mould, seem sheepish and deferential to the wealthy couple, and are treated like glorified servants, especially by the wife (Marguerite Marsh), who seems worried about their effect on her carpet. No one thinks to question the little girl. 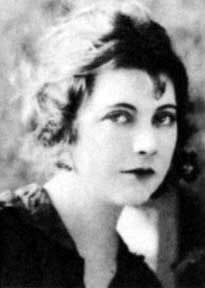 Marguerite Marsh
When the rich folks’ ex-con neighbour catches wind of all this, the second effect is triggered: he flees, with his son in tow. This is the reaction of a man whom the wealthy father knows personally, and whose son is allowed play with his daughter every day, without any (obvious) hint of social prejudice? Hmm.

Both in theme and basic structure, The Doll House Mystery is a truncated Intolerance (directed by Griffith the following year). Like that much more massive film, it examines the chaos wrought by one group against another when both are part of the same social fabric. It also gives us a devolution from misunderstanding to violence, and concludes with an exciting chase. But Intolerance places the blame for these events, and bluntly so, on pre-existing prejudices within society. It critiques the societies it portrays. The Doll House Mystery is a comedy (at least, it begins that way), and makes no attempt to question the motivations of its wealthy characters, or the police. If it did, it would lose the laughs. But if the audience didn’t notice this, what did they think their society was all about?

Consider the ending. The ex-con and his son, having fought off a bumbling copper in thrilling fashion on the trembling flatbed of a speeding train, have now holed themselves in an abandoned shack, somewhere in the desert countryside, and are now surrounded by the authorities. Gun-barrels are poised by all.

We can see the hopelessness of the ex-con’s situation, thanks to some superior establishing shots, filmed from the air. We feel for him too, because the Franklins have made it clear to us that he is innocent, and a good father—he’s just been driven to extremes. But the resolution of this near-massacre, peaceable though it is, speaks volumes. It is not among the cops that cooler heads prevail—they’re ready to shoot. Nor is it the poor man who solves things, out-gunned though he is, in his last stand. No, events are calmed only by the arrival of the wealthy father, who, having discovered his daughter’s game, makes a mad dash in his (fancy) car to the site of the showdown.

This juxtaposition (between immediate disaster and the efforts of the only man who can stop it) keeps The Doll House Mystery entertaining to its last moments. But it is the very last moments that stick with me. For though the situation is diffused, tensions between the ex-con and the police are not. The head cop still eyes his prey with hostility and suspicion, and it is only when the rich man shakes the poor man’s hand that the police disperse. The rich man’s vouch is good enough for them. So good, in fact, that they neglect to arrest ex-con for anything else he’s done over the course of the film, such as fleeing an arrest warrant or assaulting an officer. Can you imagine? Perhaps an audience of 1915 could. And if so, it makes me wonder how civilized their society really was.