What Shall Become of Them? 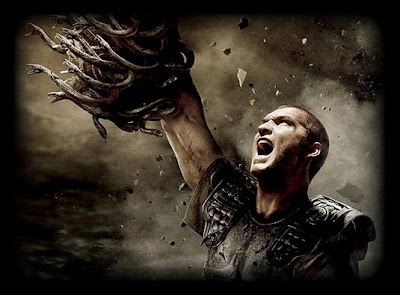 Buddy of mine calls me with an invitation. "Want to go to a movie?" he asks. He means in two hours, which is typical of his approach to scheduling. I'd complain if I had something better to do, but yesterday I did not. He wanted to see Clash of the Titans, Hollywood's latest 3-D disasterpiece.

This is the same guy who suggested we see Avatar, a movie I feared to watch, but felt I'd have to one day face. It was like death, that way. My thoughts on Avatar are immortalized in my angriest-ever blog entry, which I encourage you to read, especially if Good Friday makes you excessively upbeat. If it doesn't, let me summarize. My googleplex of problems with Avatar boil down to one: its pretention. It's a shallow, thoughtless movie that demands respect, and I could not meet its demands.

Clash of the Titans achieves nothing, but it also aspires to nothing, so I liked it better than Avatar. Consider that an endorsement, because I guarantee that Clash is exactly the movie it appears to be in the trailer, on the poster, on YouTube, and on any and all video games inpired by or directly licensed to it. In fact, the movie's penultimate battle between Perseus and the Kraken was almost identical to my friend's pre-movie throw-down with a sea monster in Gods of War III (he's got a PS3). The only difference was drama--the game having far more because it was less formulaic than the film. I knew my friend's character (avatar?) could get killed by that monster, but I never feared for Perseus.

Clash's got a heavyweight cast and a decent CGI Medusa. Take that away and you're left with expository dialogue and messy action to a factor of ten. Nothing is implied if it can be said, and blandly. Conflicts are introduced and immediately resolved. Characters are underdeveloped, even by the standards of the action-adventure flicks. Even when the script (accidentally?) sets Persus et al on a two-day trek to the underworld, during which they could do little more than sit and talk, they only brood. These people cannot ponder themselves or the events surrounding them--they can only react. Fortunately, another Event will be here in seconds. With lots of music.

I don't mean to rant about blockbuster filmmaking. The reason I'm mentioning Clash of the Titans is because it, along with Step Up 3-D and several other 3-D movies previewed ahead of it, got me thinking about silent films. How you ask? I mean it got me thinking about their destruction. The arrival of sound in 1929 (more or less) not only brought a new level of 'reality' to film, it also shelved two generations' worth of technical achievements and artistic developments within the medium, leading to years of collossally, hilariously bad talkies. Everything and everyone became a slave to the immobile, finicky, fragile microphone. Many silent stars were ruined by it.

Sound was a good thing, but if you loved films in 1930, you might have wondered. Perhaps 3-D has a similar path ahead of it? Clash was, and Step Up in 3D appears to be, laughable. As in, the audience was openly laughing at them while they were on-screen. Nobody thinks Clash or Step Up will be good, or even decent. And this could be considered the collective opinion of an audience that should like both films, at least from a marketer's perspective.

Like early talkies, which sounded terrible, the current crop of 3-D films look terrible. The glasses act like shades, muddying the colour of any film watched through them. Impressive graphics aside, the visuals still blur too much. These problems will be fixed in time, though, and the scripts will get better, if only because they couldn't be worse. And then what?

When Clash was over, it ocurred to me that two of the three movies I've seen Sam Worthington in were 3-D movies. Every actor I saw in Step Up's preview was a new face. Who are these people? And as 3-D technology advances to the point where (a) it cannot sell a movie on its own, and (b) its refinements allow for serious art, will '2-D actors' go the way of their silent predecessors?* I don't know if there's a quality that makes some stars more three-dimensional than others, but I'm starting to wonder. And, I'm starting to feel old.

*As a friend of mine just pointed out, an actor-turnover could even begin well before 3-D becomes the norm. After all, if 3-D is still a novelty, then it, not the stars, are the film's selling point. Who needs a high-priced cast then? Bring on the low-paid newbies.
Posted by Chris Edwards at 5:32 PM

Email ThisBlogThis!Share to TwitterShare to FacebookShare to Pinterest
Labels: Clash of the Titans Worthington 3D