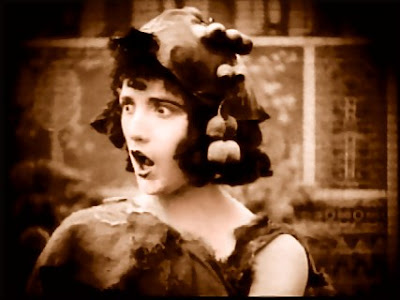 According to D.W. Griffith, it is intolerance—the inability to tolerate people or things different from ourselves—that is the root cause of suffering and violence over the course of human history. The director, it’s been said, felt this acutely. His earlier film, The Birth of a Nation (1915), was profitable and brilliant, but also so undeniably racist that even some contemporary audiences condemned it. So Griffith fired back, only a year later, with Intolerance; a film meant to prove that there was no one more aware of the tragedy wrought by social inequity, self-righteousness and fissures in understanding than David Wark Griffith. He bankrupted himself to make the picture, then the most expensive ever made. He doomed his career for its sake; ever after, Griffith would rely on others’ money to finance his projects. This, coupled with an inability to adapt to the times, would render him irrelevant.

Intolerance is not a silent film for someone new to the medium—really, none of Griffith’s films are. Like most of his work, it feels dated. But once you’ve acclimatized yourself to the trappings of an early-twentieth century style driven by a late-nineteenth century mind, there’s no comparison. You will see a film more potent, more emotionally honest, and ‘bigger’ in scope than almost any other.

Griffith proposed to observe the effects of intolerance on societies of four different periods: sixth-century B.C. Babylon; first-century Judea; sixteenth-century France, and the America of today (that is, 1916). Rather than present these episodes consecutively, from start to finish, Griffith cuts back and forth between them, underscoring the commonality of human pain at various points in each story. This technique also allows him to build tension in the second act—as soon as things look bleakest in, say, 1916, Griffith cuts to Babylon. The scenarios break down like this:

Babylon—An evil high priest feels threatened by the arrival of the prince’s wife, called The Beloved, who brings with her worship of a rival goddess, Ishtar. He conspires with Babylon’s enemy, King Cyrus of Persia, to penetrate the city’s great walls and conquer his own people. His chief enemy (though he doesn’t know it) is an intrepid scrapper called the Mountain Girl.

Judea—Selected episodes from the story of Christ’s ministry. Here, the intolerant are the Pharisees.

France—Catherine de Medici and her effete son pressure the Catholic king of France to slaughter the Huguenots (French Protestants). One of those Protestants is the lovely Brown Eyes, a girl who attracts the unwanted attention of a mercenary.

America—The Jenkins family runs a local factory and employ most of the town around it. The spinster Mary Jenkins and her brother fall under the sway of Protestant social reformers (the ‘Uplifters’), who become dictatorial once buoyed by the Jenkins’ cash. As the burdens of their charitable work grow, the Jenkins’ are forced to slash wages at the factory, causing a violent strike, which they violently suppress. This indirectly leads to great trouble for the Dear One, innocent daughter of a factory worker; along with her future husband, The Boy, who becomes a hoodlum; and a neighbour, The Friendless One, who becomes a prostitute.

Punctuating many of these shifts in time are scenes of a cloaked woman rocking a cradle of flowers. The woman is none other than Lillian Gish, Griffith’s greatest star. 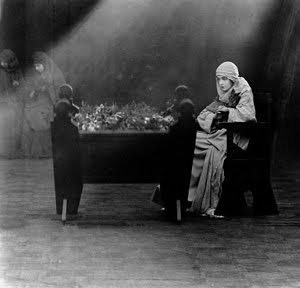 The parallels between these stories are obvious enough. Each features an intolerant upper class exercising its will against the less powerful; all but one uses a pretty girl as a personalized symbol of victimhood (the Galilee scenes take up little screen time anyway).

Without exception, the persecutors impose their will due to their own moral failings, rather than their sincere belief in the rightness of their actions. The Priest, for example, associates worship of his god with worship of himself. The Pharisees consider themselves the arbiters of God’s will. The French monarchy wishes to crush a movement that threatens its comfort. The Uplifters wish to quell licentiousness because they’re a group of ugly women who can’t get a date. It’s disappointing, really. How much more interesting could these characters have been if their motivations were, so to speak, more pure? Oppression persists because people feel justified in maintaining it, but, according to Griffith, a lot of people commit wrongdoing on purpose.

Griffith’s protagonists are types, rather than persons. The ‘Friendless One’ is precisely that; the Mountain Girl is from the mountains, etc. The characters’ names (really, their labels) serve to place them in certain spots at the beginning of the film, allowing Griffith to deliver specific moral lessons through their trials.

While the acting in Intolerance is top-shelf, the movie’s trappings force us to take these lessons from intertitles first, and only afterward from their dramatization. That we might learn more by being allowed to empathize with the characters directly never occurs to Griffith. He even footnotes the intertitles with explanations of how various scenes are accurately recreated from so-and-so’s recent archaeological dig, etc., as though that matters to the viewer in the immediate term. Griffith’s own parallel structure, which works brilliantly, makes such distinctions irrelevant, but because he includes them, Act One feels academic and preachy.

It doesn’t end that way, though. The end of Act One unleashes upon the viewer—in precise, fiery detail—Cyrus’ first attack upon the walls of Babylon. The Babylonian story, along with twentieth-century America's, have at this point taken the lion’s share of the screen-time, and so we feel concern for these walls, which the Persians attempt to scale with immense siege towers, or simply crush with battering rams and catapults.

The Babylonian sets are unquestionably where Griffith emptied his purse—their scale, in both dimensions and sheer population of extras (male, female and animal) is mind-blowing. These aren’t special effects, models or even matte paintings, though all those options were available to the director. They are real buildings. As far as their authenticity goes—well, I’m no archaeologist, but they certainly seem like something a civilization would in honour of itself. 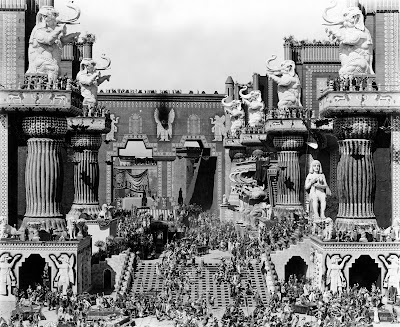 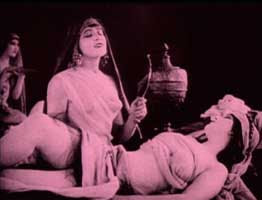 Intolerance’s second act feels twice as fast as the first. In a sense that’s true, since it’s unburdened with an hour’s worth of character introductions and establishing shots. The cutting in Act Two is swifter—not just between locales, but between eras, and events hold our attention better as a result. For Babylon and America, the change in pacing is welcome, and for Judea it is irrelevant (we know its events well enough); but France now falters a bit. Griffith gave the French story too little build in Act One to sew everything up now. Brown Eyes, one of the film’s most unfortunate characters, is never allowed to develop.

Griffith’s finale juxtaposes the Fall of Babylon with the Dear One’s race to save her husband from the gallows. This macro-micro construction (in this case, the sociological categories of Society and Individual, each imperiled) is typical of Griffith, who many times before and after this would hammer home the human cost of a great battle by interspersing scenes of warring hordes with intimate moments of grief. 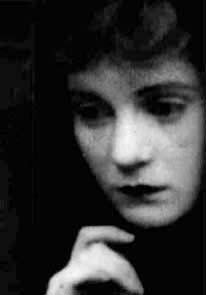 Intolerance is so huge, it can reference itself.


Finishing Intolerance, especially in one sitting, gives you a sense of accomplishment. Its breadth of venues and themes is so great that you can’t help but ‘feel’ its immensity—it’s not so different from watching the final episode of a television show you’ve followed for years. Maybe you didn’t like every episode, or even every season, but you stuck with it. Why? Because something always seemed right about it. Something always spoke to you.

Where to find Intolerance:
Kino International distributes Intolerance as part of its ‘Griffith Masterworks’ series. The DVD is loaded—along with the film itself, you can view a filmed introduction by Orson Welles, excerpts from two earlier silent epics, Cabiria (1914) and The Last Days of Pompeii (1914), and text excerpts from two of Griffith’s pamphlets: “Away With Meddlers: A Declaration of Independence” and “The Rise and Fall of Free Speech in America.” The DVD also includes details on the score, and excerpts from The Fall of Babylon (1916), which offers an alternate ending to the Babylonian sequence.
Posted by Chris Edwards at 7:45 PM