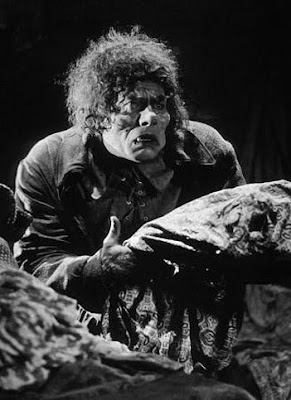 Things are complex for a deaf hunchback living in the early Renaissance. People hate what repulses them, and Quasimodo, with his hump and snaggled teeth and wart-overgrown right eye, can certainly repulse. Immensely strong, he rings the bells at Notre Dame Cathedral by hanging off their ropes like an ugly yo-yo. And he hates the people right back. Only two men are exempted from the hunchback’s contempt: Archdeacon Don Claudio (Nigel De Brulier) and the archdeacon’s brother, Jehan (Brandon Hurst).

Despite his violent temper and potential to back it up, Quasimodo (Lon Chaney) is feared by no one. He is instead an object of mockery for the mobs of Paris—so much so that they crown him their ‘king of fools.’ They can afford to be flip because they are a mob. Their numbers, and the assurance that no one but Claudio would defend the hunchback against them, makes the people brave.

The Paris public endures as one memorable character besides Chaney himself in The Hunchback of Notre Dame. Its members mill like ants in the city square, shot from above by director Wallace Worseley, so as to give us the hunchback’s perspective atop the cathedral. The valorous knight, Phoebus de Chateaupers (Norman Kerry), also sees the streets from above. Unlike Quasimodo, Phoebus is a man the average Parisian longs to be. But both outcast and celebrity stand above the throng, whether that throng is happy or sad, frolicking or violent, rich or poor.

Past these images of high and low, and Chaney’s star-turn performance, there are few depths left to plumb in Hunchback. The film feels old and flat, despite its gargantuan budget, nearly 2,000 extras, and faithful reproductions of the cathedral, Court of Miracles, Palais du Justice and other classics of Parisian architecture. Unlike another Chaney vehicle, 1925’s The Phantom of the Opera, this one is content to stage, rather than translate, its source material for the screen. Maybe it’s easier to do that when you’re adapting a classic of world literature like Victor Hugo’s novel, rather than a piece of pulp like Gaston Leroux’s. However, the 1923 Hunchback, like versions before and after, takes massive liberties with its source text. The problem isn’t fidelity—it’s pacing.

The same cannot be said of Chaney’s performance, which manages to make Quasimodo sympathetic without ignoring the ugliness he possess both outside and in. The master makeup artist based his designs on Hugo’s writings and sketches. From there, he created a twitchy and shambling character that moves athletically the way a bulldog does—with tight, powerful gestures, but no grace. He even looks a little like a bulldog, what with his top-heavy frame and constant lip-licking. And like a dog, he’s loyal to those who’ve been kind to him.

One of those few is Esmeralda (Patsy Ruth Miller), the beautiful gypsy girl who takes pity on Quasimodo when he is chained and flogged in the city square. The crowd has left Quasimodo to bake in the sun. Only Esmeralda responds to his pleas for water. He loves her for ever after. 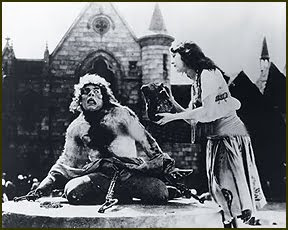 She, of course, loves Phoebus. So do the rest of the women in Paris. But unfortunately for us, this Phoebus never quite progresses past poses and proclamations. We ought to love him, or at least appreciate him, but Phoebus is such a himbo that his appeal to Esmeralda seems unlikely, at least past the purely physical. Which would be fine, except their romance is intended to blossom so fully that each would willingly die for the other. If we accept their feelings as such, it’s because the script tells us so; not because Hunchback ever shows Phoebus’ growth from playboy to devotee.

Clopin is much more satisfying. Played by the major silent character actor, Ernest Torrence, Clopin is a ruthless leader of the masses, who dreams of overthrowing the king and liberating the poor. Clopin is the worst sort of revolutionary, but he possesses some good qualities, chiefly his paternal love for Esmeralda. Torrence makes these layers plain. He could always mix his menace with mindfulness—no matter how hard-bitten and hulking his characters seemed, you couldn’t deny them their whole humanity, and so it is again with Clopin.

Clopin’s aspirations eventually lead to Hunchback’s best scene: the storming of Notre Dame by his revolutionary horde. But first, we must sit through the long succession of scenes that make this battle possible. There was an audible shifting of bums in the seats around me as we watched Phoebus and Esmeralda work through their second thoughts, then Jehan making his designs clear, then Phoebus’ near-expiration and the framing, torture, and sentence of death Esmeralda suffers as a result. This all sounds gripping, but it’s delivered in a workmanlike manner, one sequence after the next, and always removes us from the film’s one truly compelling performance: Chaney’s.

Finally, we reach the cathedral battle. Esmeralda, Claudio, Jehan and Quasimodo are locked inside, high above the street. Below, Clopin’s men begin their assault. Chaney’s in his element here, pantomiming the hunchback’s rage, but also his amoral glee, as he jigs from one point on the wall to the next, dropping lumber, heavy stones and finally, boiling lead, down onto the crowd. Esmeralda is horrified. Hunchback’s audience wakes up.

This is the movie’s most thoughtful moment, which is ironic, since it’s all action. Quasimodo’s insular life has never required him to develop a conscience. He helps only those to whom he is loyal, and he’s loyal only to those who have shown him kindness. He thinks nothing, therefore, of murdering dozens of strangers. Despite her own status as an outcast, Esmeralda is unable to sympathize with Quasimodo even on this level. The conclusion of Hunchback, though it departs radically from the book, hammers this point home by showing her almost off-hand indifference toward Quasimodo’s fate. When the chips are down, then, this Esmeralda’s no better than anyone else. It’s a lesson the hunchback was fortunate to miss.

Where to find The Hunchback of Notre Dame:
I enjoyed a public screening of Hunchback at Toronto’s Eglinton St. United Church on October 30th. The film was accompanied by an organist and singers from the Orpheus Choir of Toronto, which certainly added to its Gothic charms. Hunchback is also available on DVD from Image Entertainment. (Note: the website’s claim that this is the ‘first film version’ of Hugo’s novel is not accurate.)
Posted by Chris Edwards at 11:08 AM