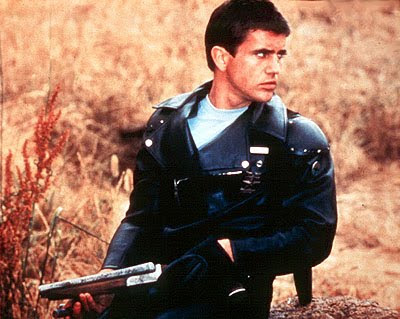 My first contribution to Row Three's 'Doomsday Movie Marathon.' What can I say? The silent era clearly wasn't too worried about the end of the world.
‘A few years from now...’

These words are powerful, so use them wisely, all you would-be directors of dystopian film. Put them onscreen right at the start, and buy yourself an hour of the audience’s good will. They’ll set aside their scepticism and give you a chance to make your future real. It is the future, after all—they’ve no more expertise about it than you.

If you’ve got a GDP-sized budget, maybe your future looks like Minority Report (2002). That’s cool. And if you have no money, and a cast full of nobodies, like that Gibson fella who showed up for his audition hung over, well, then you can make the future look like a decaying wreck. It doesn’t hurt if you’re filming in rural Australia, which can be a real wasteland when you want it to. Put some bitching cars in there, too; they might boost your sales. You might even set a profit-to-cost record that’ll stand for 21 years.

Max Rockatansky (Mel Gibson) makes a good living in Australia, a few years from now. He’s a police officer, patrolling increasingly dangerous rural highways, which stretch for miles through scrubland, punctuated by semi-derelict towns here and there. Gangs use cars and motorcycles to terrorize citizens, and the cops, in some cases, are just as degenerate. Among the many traits they share is a talent for stunt driving, and Max is the best. When a gang leader known as the Nightrider out-drives and embarrasses several Main Force Patrol (MFP) officers, only Max can keep up. Nightrider weeps when he realizes who the driver is, bearing down on him and his pink-haired whack-job of a girlfriend—the chase ends in a fiery explosion, and the Nightrider is dead. After that, his gang swears to destroy everything Max holds dear.

Max is very much an emblem for what’s right in a world going wrong, so destroying him would be highly symbolic, at least to us. He’s the only character we see with a nice home, a wife and a baby (other cops seem to live in dingy bachelor apartments); he doesn’t seem to enjoy violence, even when he causes it, nor is he a hot head. He’s even guilty. When an MFP mechanic gleefully shows him his new, souped-up patrol car—we’re talking about an ink-black Ford XB Falcon Hardtop, here—Max asks him where he got the parts. He’s the only one who would think to.

This Australia hasn’t been baked by a nuke, or depopulated by a plague. Little is said about fuel shortages either, though that’s a big part of the movie’s two sequels: The Road Warrior (1981) and Beyond Thunderdome (1985). The dump’s just got no discipline anymore. Nobody even bothered to fix the sign with the half-hanging ‘U’ in front of the Halls of J(u)stice, where Max works. His commander, Fifi (Roger Ward) tells Max: “They say people don’t believe in heroes anymore. Well damn them! You and me, Max, we’re gonna give them back their heroes!” Max is sceptical.

Fifi looks like the toughest guy in a leather bar. He’d fit right in with the late-Nightrider’s crew, now led by the Beethoven-haired ‘Toecutter’ (Hugh Keays-Byrne) and his right-hand man, the very blond and very dour Bubba (Geoff Parry). They’re just waiting to get shot, of course. In attitude, Toecutter’s gang is no better than Alex’s droogs in A Clockwork Orange (1971)—more practically dressed, sure, but likewise unwilling to do anything outside of their self-interest. Whim equals justification, and only when one of their own is targeted are they willing to be compelled to act. Plus, it’s the 1970s, so this crew is pretty glam. And there’s not too many girls in the gang, you know? Like, not enough of them for you to be sure of anything. Leathers aside, Max looks a lot more macho than these guys. He’s our hero-on-the-edge.

A best friend, a nice house, a wife and child, and a glut of effeminate villains... will any of them survive? To the movie’s credit, events do not unfold in predictable fashion. To my discredit, perhaps, that made me impatient. See, I like action films a lot. And I don’t subscribe to the notion that they’re ‘escapist,’ any more than any other genre. Action films, like any artwork, allow us to indulge aspects of our personalities we may normally submerge. In this case, it’s our linked desires for adrenaline and vengeance. What makes Mad Max interesting—and part of what makes it good—is that it makes you wait. But sooner than later, you just want Mel to get in that ink-black Ford XB Falcon Hardtop and plough those bastards into the asphalt. 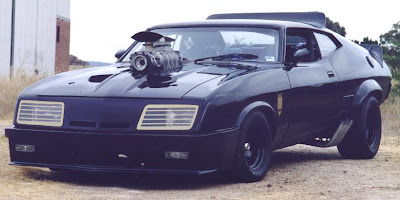 By no means am I saying the movie’s slow. No one could accuse director George Miller of that. The opening credits hit the screen like a litter of bullet holes, followed by rapid cutting. The chase scenes are perfect—not only do they deliver the vehicles’ speed and power, they also pan out often enough to give us a clear sense of what’s going on (modern directors, take note). Miller shoots, makes his point and moves on—rarely does a scene feel long and nothing is shown onscreen that the audience could intuit for themselves. The film, like its main character, is on a mission, and time is short.

A word on the music: it’s everywhere, and it’s really loud. Lots of ass-kicking cymbals and tubas and they’re audible much of the time, even when characters are speaking. It’s a bit of a cinematic throw-back, actually. To play music over the dialogue is to assert, very forcefully, the director’s opinion of what this moment ought to mean to you, the viewer. It’s a technique you don’t see much today, perhaps because we so value the opportunity to come to our own conclusions about art, informed or otherwise. It’s also risky—as a big fan of silent film, I know all too well how a dominating soundtrack can damage, rather than enrich, what’s onscreen. In Mad Max, the music stays aggressive even through routine moments, reminding us that big problems are imminent. It works.

You’ll like Mad Max best if you shut off your brain and just feel it. That’s not a criticism. Heavy metal shouldn’t be quiet, and action movies—at least, action movies like this one—shouldn’t be introspective. Hit the gas, cinephile, and think on your own time.