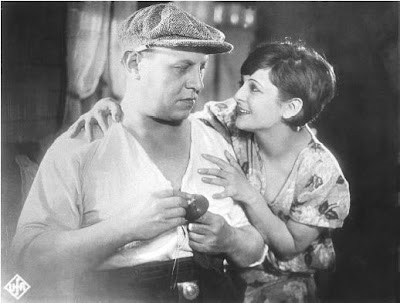 What keeps a trapeze artist alive, year after year? Talent and confidence.
Without talent, you could never climb to those maddening heights, or sail from platform to bar to empty space, and back again. And you must believe you can do it every time.
But you must have confidence in your partner, too. You must believe that your ‘catcher’—the man whose hands you sail toward in those seconds when only momentum keeps you aloft—is ready, and strong. He will save you; he will never hesitate.
How stupid would it be to betray that man? To risk inserting an emotional wedge into what should be a moment of thoughtless reflex? You’d have to believe yourself too smart to get caught, I suppose; no pun intended.
Varieté is at its tense best when it poses questions like this. The film’s star, Emil Jannings, plays a catcher; first jilted, then called upon to protect the bodies of those who betrayed him. All he has to do is relax his grip, and the handsome trapeze artist who beds his wife will plummet to annihilation.
That is not very likely to happen. But we know Jannings’ catcher, Hueller, will do something terrible before the film is through. We know this because we first meet him in prison. He is “Prisoner 28,” up for parole, and sitting before a judge who insists on hearing his story.
There’s more to this Hueller than meets the eye. A seemingly happy husband when the tale starts, we see him dote over his wife, the very cute, much younger Berta-Marie (Lya De Putti); massaging her after their act, fixing her breakfast, kissing her passionately. They’re in love, we figure. If Hueller seems old enough to be her dad, we chalk it up to creative license, or accept it as the product of the transient life that travelling acrobats are likely to live.
Artinelli (Warwick Ward) was a trapeze artist of much greater renown; one half of a respected team of performing siblings. But when his brother slipped and plunged to the big-top floor, Artinelli’s career quickly followed. In need of at least one partner to continue his work, Artinelli settles for two: picking up the Huellers and forming a trio. His affair with Berta-Marie begins soon after. 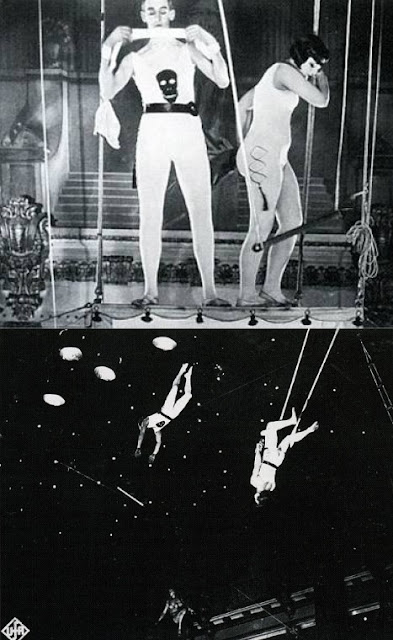 Varieté, in the form that I saw it, is the simplistic story of a good man wronged. We’re kept engaged by two things: the promise of a murder, perhaps a spectacular and messy one; and the cinematography, which is as dramatic as such things got in the mid-1920s. Karl Freund, who shot The Golem (1920) and The Last Laugh (1924), and went on to helm the lens for Metropolis (1927), here strapped his camera to the trapeze itself; delivering a dizzying set of rises, dips, and pendulum swings, stories above the ground; capturing the fine line between freedom and doom. I didn’t believe the actors were really up there, but I did know how they’d feel if they were.
Freund also did a lot of location shooting—a rarity for German Expressionist films, which often distorted the physical world through elaborate studio sets. The glimpses we get of Weimar-era Berlin are a treat.
As for the star, he was an interesting actor in many ways. Jannings was an immense talent and an achiever of milestones. He took risks. His career had a complex, and finally sad, arc. Jannings was a vigorous, thick, barrel of a man whose characters make me think of sturdy vessels filled with volatile substances. The vessel doesn’t burst; instead, the contents leach through and make it dangerous.
Hueller is another of Jannings’ churning portrayals. But I can’t tell you if it’s the actor who really gives the role its juiciness. If you see the version of Varieté that I did, you might give him the credit; because the Hueller you’ll see is not a complex man at all, or even an interesting one, outside of the intensity Jannings brings to him. However, I saw the film as part of this year’s Toronto Silent Film Festival; and we were informed, before the film began, that Hueller’s backstory was in fact more complex than the movie we were about to see would suggest.
As part of her prepared remarks prior to the screening, the Toronto International Film Festival’s Digital Coordinator of Adult Learning, Alicia Fletcher, explained to us that this version of Varieté was not just the product of Jannings, Freund, and director E.A. Dupont’s hard work, but the U.S. censors’ as well. Missing the first two reels from the original German version, the tamer American cut omits the fact that Hueller abandoned his wife and newborn infant to marry the underage Berta-Marie. Intertitles were added to confirm that Berta-Marie was Hueller’s wife, not his mistress. And the German ending, Fletcher suggested, was far grimmer indeed. 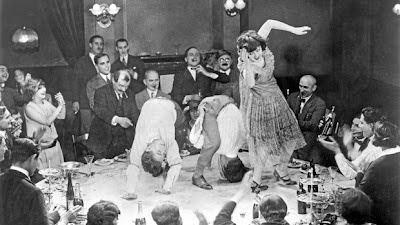 None of this hamstrings the movie we got. As a piece of art, it can be judged on its own merits, and I think this version of Varieté, which retains Freund’s memorable camerawork, can be recommended for that, at least. Still, it’s those missing reels that gave the story its symmetry. Without them, Hueller is a mere victim; but with them intact, he is a victim of a betrayal much like the one he committed. He must deal with guilt, as well as rage. Any vengeance he visits upon Artinelli, or his wife, will be, he knows, no more than the punishment he himself deserves.
That sounds like a better film, doesn’t it? One day I hope to see that film. In the meantime, I'm grateful I saw this one: an example of how a brilliant actor and a brilliant cinematographer can elevate a simple tale.
Varieté screened at the University of Toronto’s Innis Town Hall on April 3, 2012; part of the Toronto Silent Film Festival (TSFF). Live accompaniment was provided by Laura Silberberg.
Varieté was the fifth and final feature shown at this year’s festival. It was preceded by one of my favorite silent films, Our Dancing Daughters (1928); Tabu (1931); Blood and Sand (1922); and The Italian Straw Hat (1927).
Posted by Chris Edwards at 9:32 AM