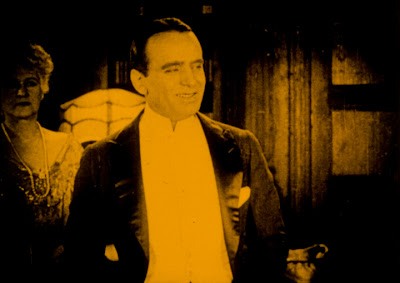 No problem’s too big for Douglas Fairbanks.


Sorry, I mean “Dick Remington.” Dick isn’t a pirate, a freedom fighter or a thief, in case you're wondering—he’s just a student at Oxford. But in every way that matters, he’s exactly the type of character Fairbanks always played; and the distinction between those characters and the man himself was never clear-cut.

Like Fairbanks, Dick is a born performer—one who claims to be a normal man, but for whom the entire world is a performance space. Everything that impedes his performance must be cleared away.

In Mr. Fix-It, the issues are basic. Dick’s American roommate, Reginald Burroughs, hasn’t been home in more than ten years. He has fallen in love with an English girl, but his family, upon whom he relies for funds, has another girl in mind. “I’ll fix that!” says Dick. He’ll go to America in Reggie’s place. He’ll assume his identity, and somehow reorder the situation so everything works out.

Dick does not plan to marry the other girl. Dick does not plan anything, it seems. He just declares his will and gets on with doing. We believe in him, because he’s so obviously capable. Played by Fairbanks, the great acrobat, he moves over, under and through life’s obstacles with ease and pizzazz. How does he take a bath? He grips the sides of a full tub and flips into it—still clothed. His whole life is maneuvers like this. Everything is spectacle, and done to perfection. 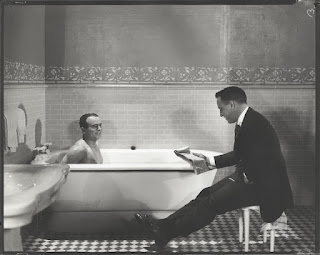 Fairbanks delivers some great stunts in this film—all of them his own, of course. We see him rappel down a building via rope; hand-climb between two more buildings along a hanging banner (spanning a street); and leap from the main-floor to the second-floor of a tavern. He does battle in a Keystone-esque brawl, too. And he betters the world: discovering the lovely, orphaned Mary McCullough and her young brothers and sisters holed up in a tenement, starving—Mary desperate enough to consider the street corner—and rescuing them. He juggles it all, somehow.

Mr. Fix-It’s cast is enormous, including the friend at Oxford and his three aunts; an uncle; the pretty girl-in-peril and her five siblings; a butler, a lawyer, a Pekingese; assorted fiancés and other would-be mates. These are mostly staid and dusty individuals, locked into arrangements that make them unhappy. But a solution—a fix—is in reach for almost all of them. What they need is the help of a free spirit; someone who doesn’t respect the same boundaries that pen them in. For Dick to execute this necessary set of social shifts—making everybody happy, including himself—will be a trick of a different sort.

A man for whom life is so effortless could be obnoxious. So why do we like him so much? I think it’s because he’s innocent as well as successful.  Dick seems unaware that failure is a possibility, and so he doesn’t fail at all. We suspect that it really is that easy; and lament that we had to grow up and forget how to be like him.

Dick spends as much time as he can with the children: the only other innocents in the film. He even moves like them. I loved watching him sliding belly-first down a staircase like a snake, with the four little McCulloughs following in kind. Then he descended the stairs again, on his hands, as easily as we might have walked. 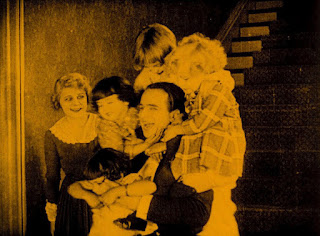 Mr. Fix-It is better than most of Fairbanks’ better known adventure films. Most of them are too long, while Mr. Fix-It feels just right. And the stunts and tricks we see here seem, to me, to be all the more exuberant and memorable for having been performed in a more normal setting. The joy of silent physical comedy is the sense it gives you that your world is pregnant with gags. Nothing is bland—everything brims with energy; the potential for action.

Robin Hood and the Black Pirate may have their charms, but Dick Remington reminds us how fun our own world could be.