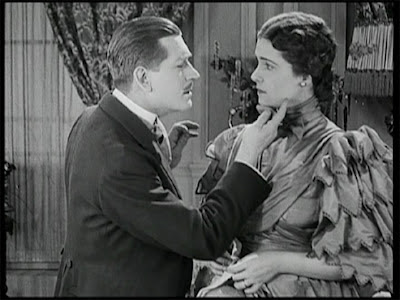 I have friends who believe that weddings are needlessly stressful. It’s their opinion that a celebration of love should be simple and informal; a gathering on a single day, important not for its own sake but for what it represents. Don’t go overboard, they say: just have fun.
Some of those friends are married now, and I don’t think a single one of them managed to pull off their wedding day without nearly pulling out their hair, too. The idea of a low-key wedding is a wonderful one, but flawed. Weddings cannot be low-key—there’s too much to plan. We want our friends and relatives to be present, comfortable, and well fed on the big day—all of them, at the same time. But people have busy lives. Sometimes they’re spread across the planet. The only way to get them all together in one place, at once, is to mark the event as one of immense importance, never to be duplicated. And this is not—it cannot—be a relaxing thing.
This is the genesis of everything René Clair’s The Italian Straw Hat will become. Before it turns farce, before it turns surreal, it is simply the story of a family on the day of a wedding; building tension, and material, from the dozens of nitpicky things people do when they’re desperate to make everything turn out right.
Fadinard (Albert Préjean) is marrying Hélène (Marise Maia) in the afternoon. It is morning. Fadinard is en route in a buggy, alone. Hélène, meanwhile, prepares in the bridal chamber; her relatives surrounding her like a cloud of bugs. All of them fuss: one over a missing glove; another over ill-fitting shoes. The mother of the bride, probably intolerant on a good day, buzzes around the room, giving orders. When something looks wrong to her, she perches a pair of spectacles on her nose, and determines precisely how wrong it is. 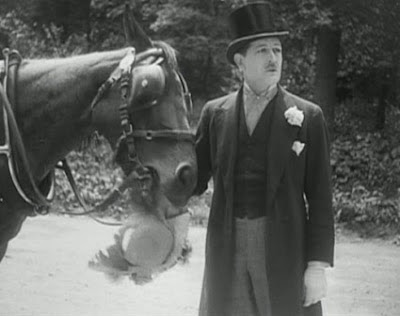 Fadinard, by contrast, seems relaxed. And why not? It’s a beautiful day for a ride. His wife-to-be is lovely and sweet. He’s on time. When he’s forced to stop the buggy a moment, he’s unperturbed. When his horse wanders a few feet away and munches on a ladies’ straw hat caught in the bushes, it doesn’t concern him. Why would it?
Yet the demise of that hat is nearly the demise of the groom.
That Fadinard—unflappable, cool, perfectly prepared—can be upended so easily is the film’s ultimate joke. He is a competent man, made vulnerable by the day in question. The hat, we quickly learn, belongs to a married lady spending time in the bushes with a military officer who is not her husband. The officer, who communicates entirely through threats, informs Fadinard that the hat must be replaced with a duplicate, immediately—if the lady returns home without the rare hat, her husband will be suspicious. Really, the lady’s honor is at stake. The officer would gladly look for a hat himself, but the lady feels faint, you see—she’s prone to spells—and must be tended to. And anyway, it was Fadinard’s horse. 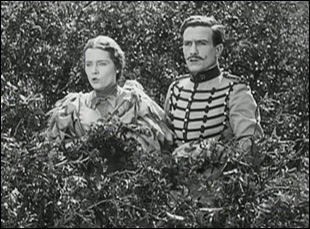 A recap of what follows would be detailed and lengthy. The gags in The Italian Straw Hat rest heavily on individuals being in the wrong place at the wrong time (or sometimes the right time, though not for Fadinard). Subtle cues—necessary on a big day—are thwarted by the thick-headedness of guests, servants, and other folks. Objects disappear or fail to work when they’re needed most. You’ve seen lots of films like this one. But what I’d rather discuss, in the space I’ve got left, is what makes the movie unique. Because, though a lot of films feel like The Italian Straw Hat, I’ve never seen one that looks like it.
For one thing, it looks back. Not many silent film directors, even by the end of the silent period, made films that paid homage to the work that came before. Of course, these directors were influenced by earlier films or styles; but it wasn’t common to see references to them made explicit on-screen; especially not in the most obvious way, through a visible shift in format, aesthetic, or tone, that recalled something older. Nowadays, this is common. Quentin Tarantino makes a career out of it. And René Clair did it too, in The Italian Straw Hat.
My favorite scene in the film concerns Fadinard trying to explain his (now profoundly complex) predicament to another party. The moment in the bushes, as he remembers it, is told in flashback. But it’s not simply a repeat of what we saw earlier in the film, or even similar visuals, distorted by Fadinard’s retelling. Instead, Clair presents the scene vaudeville-style, complete with awkward framing and phony looking trees. The performers from the original scene reenact it through histrionics. To capture the absurdity of Fadinard’s situation, Clair delivers it in the fashion of those over-the-top, sometimes klutzy films made before 1910.
The director seems to look ahead, too. The timing of his cuts; his use of fast-motion, slow-motion, and stop-motion in long-shots, reminded me of British comedies made thirty or forty years later. 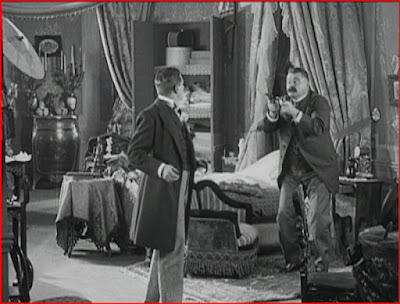 It’s a bit of a cliché to compliment silent films for modern-looking camerawork, but I’ll risk it here. Partly because the camerawork in Straw Hat feels avant-garde even by modern standards. Clair employs close, medium and long-shots not just for grammatical purposes, but to make different points. Close-ups of objects, like the hat, or a man’s soaking feet, are timed for comic effect. So are the long-shots, which fashion gags out of the movements of anxious crowds and indifferent passers-by alike.
But the medium-shots interested me most. Clair’s foregrounds in Straw Hat are insistent; even aggressive—more than once he films an actor—technically speaking, the focal point of the shot—partly obscured by someone else’s head.  Late in the film, a group of lost and drunken wedding guests, filmed in a shot I’d call medium-long, are marched upon by three cops; who appear like shadows from the bottom of the frame, overwhelming our visual space and making us feel much like the guests must have felt at that moment. And remember, this is a comedy. 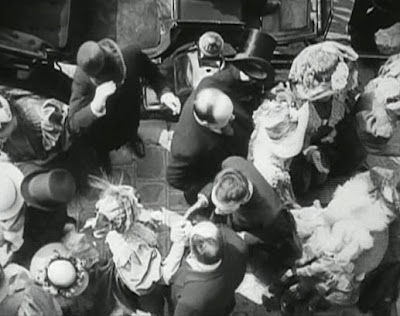 Best of all, to me, are the occasional changes of angle Clair indulges in. Filming an early meet-and-greet between wedding guests, the director chooses to position his camera over top of them, as a group. And the result: the guests become like so many rotating gears in a clock, each turning from person to person, kissing on both cheeks, embracing the same way, again and again. We laugh at how silly they look; and then, at how silly we look, doing the same thing. It’s a great reminder that we’re most vulnerable to foolishness when we’re trying our hardest to take things seriously.
Most of the people in this film make their own trouble. They sustain the goofy situations they’re in, intentionally or not. But they only do it because they care so very much about making things right. Have you ever seen a comedy about someone who cared too little? There aren’t many of them, because interesting things rarely happen to people who strive for nothing, and it doesn’t make for much of a story anyway. The men and women in The Italian Straw Hat desperately strive for a day they’ll never forget. Because they do, we’ll never forget them, either.
The Italian Straw Hat screened at Toronto’s Casa Loma on April 2, 2012; a co-production of the Toronto Silent Film Festival (TSFF) and the Toronto Theatre Organ Society (TTOS). Live accompaniment (on the Mighty Wurlitzer!) was provided by Clark Wilson.
The Italian Straw Hat was the fourth feature shown at this year’s festival. It was preceded by one of my favorite silent films, Our DancingDaughters (1928); Tabu (1931); and Blood and Sand (1922).
Posted by Chris Edwards at 3:33 PM