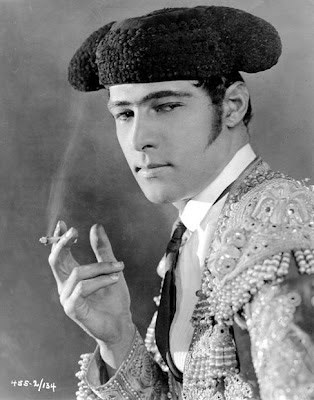 If movies stood still, Rudolph Valentino would be history’s greatest actor. But that doesn’t make sense, does it?

Oh, he addles me. In stills, Valentino’s beauty and presence shine through to me as clearly as they do to anyone. But his major films amount to a collection of poses, strung along a thin thread of bromides and nonsense. They’re so hokey and silly; his acting so dopey, that nothing can pull me in. I’m left trying to apprehend him as his long-dead fans—most of them women—once did. And I fail.

On to Blood and Sand. The film stars Valentino as Juan Gallardo, a handsome would-be toreador of humble origins; a man who dreams of nothing but the bullring, and would prefer to die in one than live the life of a shoemaker, as his sister and widowed mother expect of him. Juan is reckless, impulsive, arrogant and irresistible. He differs little from roles Valentino played later, except in one respect: in Juan, we have a true man-child. Not a young man used to getting his way, but a man who has simply experienced too little of the world to know what awaits him.

This makes him more forgivable than some of Valentino’s characters. When Gallardo delivers the in-ring performance of a lifetime, shutting up the haters for good, we feel he’s earned his fame. When we see him woo the lovely, innocent Carmen (Lila Lee), we’re more skeptical—the guy’s already got a hoard of women throwing their hats and hankies, and themselves, at his feet. But it’s still sweet, sort of, that he’d even consider marrying just one. 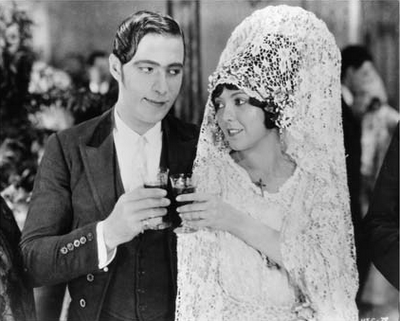 Of Carmen, little needs to be said. Her role is to be the thing betrayed—emblematic of everything in Gallardo’s past that he forgets; and everything his future could be, if only he would settle down. But he won’t settle down. If he tried, sexpots like Doña Sol (Nita Naldi) would slink from their couches and dissuade him. They love the danger he represents.
Naldi, like Valentino, built a career as a beautiful object; and like him, her appeal is not as obvious today. A curvaceous brunette with heavy lidded eyes, Naldi had an indeterminate ethnic look that proved generically exotic to men of the 1920s; she did little more than look the parts she was given. In Blood and Sand, she plays a society girl with a taste for handsome men in barbarous lines of work. Doña discovers Gallardo at the arena, meets him after his match, and gives him a ring. Cleopatra gave this very ring to a brave warrior she favored, Doña explains. What matters here is not that she sees Gallardo as a brave warrior, but that she sees herself as a queen. 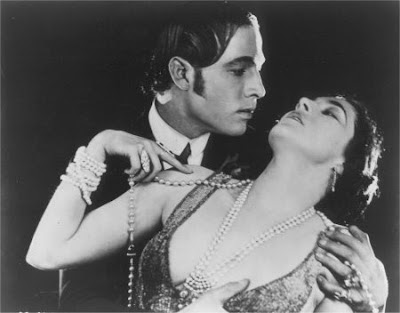 Sometime later, though not much later in the film, Gallardo arrives at Doña’s chambers. The scene is absurd: she receives him in a state of semi-dress; reclining among quasi-oriental draperies and attended to by a bronze man with a fan the size of a boat paddle. She makes a show of smoking—almost fellating the smoke, if that’s possible. She plays the harp and offers Gallardo her bare back. He seethes. We giggle.

Is this scene supposed to be played for laughs? I’d like to think so. But the stakes seem too high for Gallardo; and anyway, the man playing him, even at this early point in his career, was already a serious sex object to millions. What were those millions seeing here? Did they laugh too?

If not, what are we to conclude? How much of the appeal of a Valentino movie rests on an appreciation of the man in his own time? It’s this sense of dissonance: between me and the star; between me and the audience I think he spoke to, that makes watching his films so frustrating. 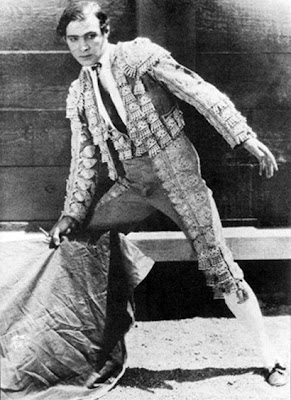 Blood and Sand does have a point, by the way: Success borne of brutal acts cannot be sustained. As fridge-magnet aphorisms go, this one has some merit. Were the makers of Blood and Sand at all interested in exploring what this really meant, we’d have had an interesting movie.

Another thing that would have made Blood and Sand more interesting: more blood in the sand. Though we’re treated to a bullfighter in full garb, an arena with a real crowd, and even a real animal, there’s never a moment when the visceral thrill of man-on-beast combat seems real. We’re never ‘there’, even in the abstract. Fred Niblo’s direction, adept at capturing Valentino’s static glory, never gives us action. We get a lot of bull, but not much meat.


Where to see Blood and Sand:
Blood and Sand screened at Toronto’s Revue Cinema on March 31, 2012; part of the excellent Toronto Silent Film Festival (TSFF). Live accompaniment was provided by Andrei Streliaev.

Blood and Sand was the third feature shown at this year’s festival. It was preceded by one of my favorite silent films, Our Dancing Daughters (1928); and Tabu (1931).
Posted by Chris Edwards at 11:18 AM