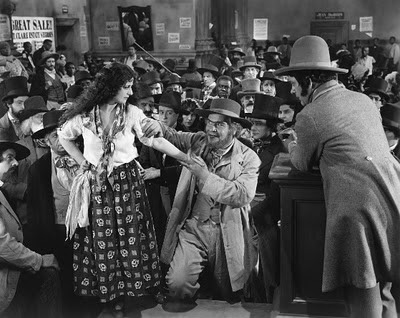 It’s a big, toothy smile, filling James B. Lowe’s face. It’s gleaming white against his very dark skin. (Lowe, thankfully, is not a man in blackface, but an African-American actor.)

The smile’s benevolent and gracious; just like Tom. It also looked, to me, to be strained, as though Tom, or at least Lowe, had to put effort into appearing so content. So we moderns would assume. Uncle Tom’s Cabin, set during and just before the U.S. Civil War, presents Southern slavery as a system almost as idyllic as it is vile. The film is even-handed on an issue we no longer demand evenness from, with the result leaving you unsure—how could someone argue against the cruelty of slavery without arguing against the owning of slaves?

This ambivalence had deep roots. By the time Universal set out to film Uncle Tom’s Cabin, Harriet Beecher Stowe’s abolitionist novel was already an established American classic. It had been filmed many times, and formed the inspirational core of endless stage shows that toured both North and South. But those shows were very different, depending on where they were performed. David Pierce, in a lengthy essay on the film, included on Kino International’s DVD, explains:

“Productions were tailored to appeal to different audiences—abolitionist for the North, minstrel for the South, and spectacle for both, including a loose adaptation by P.T. Barnum.”

Universal, of course, did not have the luxury of creating two films, each one suited to the tastes of half a country. They did the next best thing, though. I urge you to read Pierce’s essay in full, so you can learn about the company’s frantic, sometimes clumsy, often craven attempts to make a movie that would appease everybody.

Uncle Tom’s Cabin begins with a quote: “There are few, I believe, in this enlightened age who will not acknowledge that slavery as an institution is a moral and political evil.” Wise words, which happen to have been spoken by Robert E. Lee, future leader of the Confederate forces. We’re then introduced to a garden party at the estate of one Mr. and Mrs. Shelby, “whose gentle rule of the slaves was typical of the South.”

The Shelbys are celebrating the wedding of one of their slaves—a woman named Eliza—to another slave, owned by someone else, named George. You might be confused when these characters first appear on-screen, since they’re both as white as the Shelbys. 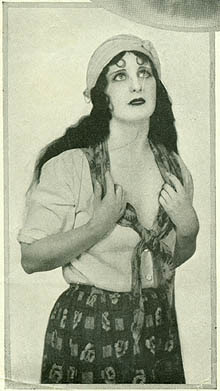 Eliza is played by Margarita Fischer, wife of the film’s director, Harry A. Pollard. This explains her as a casting choice, but it was apparently the Universal sales department that insisted the couple—both mulatto in the story—appear demonstrably white onscreen, so as not to offend audiences uncomfortable with the sight of non-whites in the throes of romance.

Uncle Tom, introduced some twelve minutes into the film, is a longtime slave of the Shelbys, so loyal that he can be sent to retrieve money from a free state and be expected to return. When things go wrong, he merely prays. Tom’s not a negative character, necessarily, but he is boring; figuring in few of the film’s memorable moments. What makes him notable is his forbearance, but while the film considers this a strength, we’re more likely, today, to consider him cowed or psychologically damaged.

It is Eliza, tears streaming down her face in scene after scene, whose suffering takes up most of our time. Her husband’s master is a brute, keeping them apart before and after their son is born. When financial troubles force Shelby to sell both Eliza and Tom, her family is threatened even more, and she spends the rest of the film either in transit or on the run—resold, abused, and desperate to protect her son from slave traders.

We see Eliza pushing through a blizzard to escape her fate, over snowbanks shoulder-high. We see her running after a carriage containing her son, the camera keeping pace with her even she falls behind, and then, in her rage, turning a bullwhip on the man who held her back. In the film’s best scene, Eliza, child bundled in her arms, leaps from ice flow to ice flow across a fast-running Ohio River to escape her kidnappers and their hounds. These is pure action, and worthy film-making.

Uncle Tom’s Cabin trades in these scenes, and in the ache of the near-miss—Eliza nearly saving her son, Eliza and George almost stumbling into one another, et cetera—creating a film that’s compelling, so long as you forget the actress’s skin color. And you can forget, from time to time. Fischer is strong in her role and her plight is honestly tragic. We can say, without qualification, that no one should go through Eliza goes through. Bondage, beatings, suggestions of rape, splitting of a family—these things are universally understood to be bad, and insofar as we wish them on no one, they are not matters of race at all. 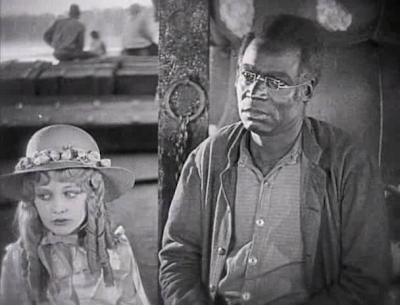 But Uncle Tom’s Cabin keeps hedging. Dropped like a bomb into this post-racial reflection are Eva and Topsy, two bizarre child characters who form an—apparently—steadfast friendship across racial lines.

Eva, played by Virginia Grey, is the young daughter of a New Orleans slave owner to whom Tom is sold. Grey is one of the most beautiful children I’ve ever seen on film—a glossy, ivory-faced doll with curls so lovely and thick that I nearly wrote “golden” here, despite the film being in black and white. Eva’s temperament matches her appearance. She’s an angel. 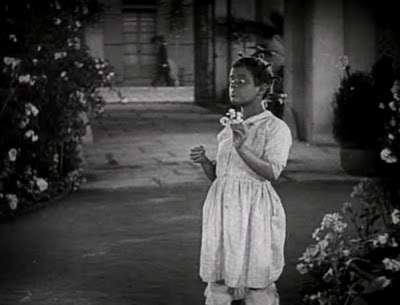 Her opposite is Topsy, a household slave of about the same age. Topsy isn’t pretty at all, and she’s a rascal, though not mean-spirited. She is played by Mona Ray, a 4’7”, 19-year-old white actress, making this one of the film’s few blackface roles. I think I know why.

There is a scene, shortly before Eva’s death, when she tells Topsy she loves her. Though patronizing by modern standards, it’s still a tender moment of genuine emotion, between two young girls presented as equals. It is intimate, the way confessions between close friends are. But whatever greater point it is intended to make, Pollard ensures this scene happens between two whites. Universal’s butts were covered.

Uncle Tom’s Cabin is a funny film. It’s earnest and cynical in equal measure; an exhilarating movie that pulls you in, then pushes you away. I honestly liked it, for its pacing, its action, and the quality of its performances. I disliked it for its blindness to history, and its choice of casting. Yet, that cast performed well, meaning my disapproval is based, in a way, on the color of the actors’ skin. What an odd feeling that is for a viewer. Maybe this is the legacy of Uncle Tom’s Cabin: to be the film that gave a little to everybody, and satisfied none of them.