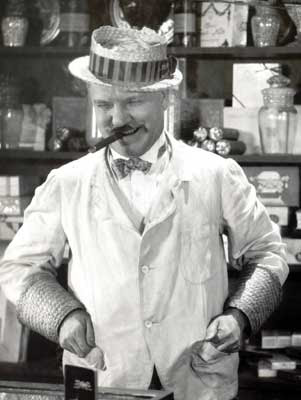 Sorry for the paucity of content here lately. I’ve had a lot of freelance work on my plate; some of it challenging but most of it just really, really time-consuming. It’s kept me in front of Ol’ Trusty (my laptop) for enough hours that I don’t want to spend my leisure time there too.

I like to be busy though. When you work for yourself, you feel guilty if you’re anything less than grateful for work. It’s not free time you long for, but balance, because, in my field anyway, your work isn’t what drives you so much as the lifestyle it allows you to maintain. Things like this blog, and the anywhere-from-ten-minutes-to-three-hours of film watching that proceed every post, are possible because I can carve out a pocket of time for them. If I was nine-to-five, it would be harder. I know, because it was.

There are times, then—times lately—when one or two of the elements that compose my life rise up, tide-like, and swamp the rest. And so you wish for a pocket of time, where you could nestle yourself, to work on the things that matter most; or even, just, to get enough rest—just, to do what you want, when you want.

I write this in self-pity, perhaps, but also in sympathy. Elmer Prettywillie, the main character, hero, anti-hero and sometimes villain of It’s The Old Army Game, feels a similar pain to mine. He’s the town druggist, back when that meant you sold all kinds of things, and did a little surgery after-hours too, and he’s addled by a life full of people who will not let him alone. If he were a better man, it would be a tragedy.

I haven’t seen a lot of W.C. Fields’ films, silent or sound. It’s not a deliberate thing; Fields is one of many film stars who reached their peak in the 30s and 40s, and I’ve long sacrificed the goat of the 30s and 40s to the graven image of the ’teens and 20s. (A fair trade, though it gets a bit lonely.) My image of Fields is a squinting, ponderous man in a hat; overweight; in the end-stages of serious alcoholism. I take it from cartoons, mostly: parodies of him from the artists at Warner Brothers, which taught me his face long before I knew who he was; and from The Bank Dick (1940). I remember almost nothing of The Bank Dick’s plot except that it barely had one, and that its protagonist seemed to have no interest in doing much of anything but drinking, and no more willingness to take the bizarre events around him seriously than I did. What happened, happened.

Fields’ Bank Dick persona, Egbert Sousé, is more Zen, or at least a lot more drunk, than Elmer Prettywillie. Maybe Elmer will age into Egbert, if he survives. This is not assured. His world is a very dangerous one. Elmer shares the space above his store with his sister (Mary Foy), and her son (Mickey Bennett). Neither has much use for him, though he does pay their bills, so I suppose they appreciate him for that. Elmer doesn’t much like them either, and the best (worst?) gags in the film involve him trying, passively but repeatedly, to murder the child. 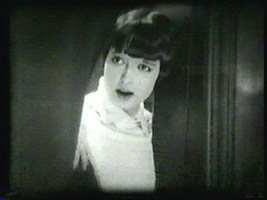 Work is better. There, sometimes, Elmer’s the boss; selling all manner of goods and services to people who may not like him either, but still need all manner of goods and services. (Watch for a pretty funny running gag about Prohibition.) The best thing about work, by far, is Elmer’s assistant, Marilyn (Louise Brooks). Anyone who looks like Louise Brooks is worth hiring.

It’s the Old Army Game is presented in semi-standalone episodes, a dream-film for DVD track-selection, if nothing else. Several exist solely as gag sequences for Fields, in a film that could survive without some of them, but maybe this isn’t a criticism, since structure wasn’t something you sought from a Fields film, even in the 1920s. As gags go in this one, I liked best the scenes on Elmer’s balcony—an incredibly dangerous place for him to nap, since it’s missing a chunk of railing, and just as deadly to the various passers-by who disturb him, since he’s got a shotgun and the high ground.

Prettywillie’s not just unstable in the script; he seems unstable as a concept. How smart is he, for example? One early scene, where he tries to douse a fire in the drugstore with a spoonful of water, crosses the line from Keaton-esque misdirected obsession to Langdon-esque mental retardation. Other times he’s cagey, as when he outwits a grafter at his own shell game. Elmer’s morally ambiguous: neither the best nor the worst man in town, someone interested in number one and prepared to deal under the table, but not dishonest in a predatory way (he’s smart enough get involved in a lot-selling scheme, for example, but I don’t think he knows it’s a fraud…but, that’s not due to stupidity, or he wouldn’t have been smart enough to get involved. Get it? ). He’s a fairly honest businessman, but on the other hand, he’s prepared to ruin a rich man’s lawn in the course of a family picnic, which he does about two-thirds of the way through the film. It’s pure vandalism; remorseless destruction without a hint of Robin-Hood-style payback to be found. 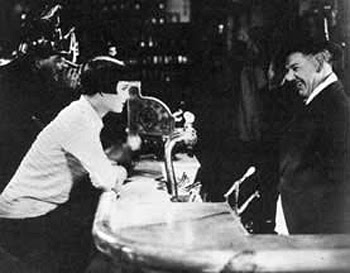 As for Louise, she’s not at her best here, not even physically, with Pandora’s Box another three years away, but her role isn’t much either: she’s the pretty girl everyone likes—apparently the only pretty girl in town—maybe the only girl. If I find her glances a little too knowing for the supposed total sweetheart she plays, well, maybe I’m guilty of looking ahead. Her love interest, William (William Gaxton), is a good-looking, semi-serious flim-flam man and I can’t think of a more thankless part in a W.C. Fields film. He’s not there, even when he is.

Elmer’s charm is that he has none; no tact either; no filter—he’s a cross between Rodney Dangerfield and Larry David. He’s constantly hectored and annoyed by things and if he were in a sound film, it might be enough for him to say aloud what most of us would be thinking: about his would-be girlfriend; sister; nephew; the town, etc. But this is a silent film; so, for the most part, he actually does, or tries to do, what he dreams of doing. This is more transgressive, since the line between Elmer the anti-hero and Elmer the sociopath is sometimes drawn by his failures to do wrong, and those failures are caused less by changes of heart than by incompetence. 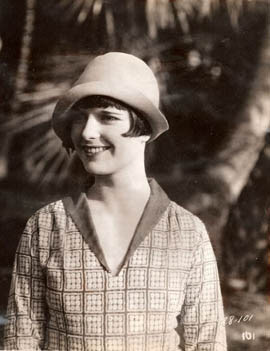 It’s the Old Army Game was less funny to me than it was startling: A movie filled with the kind of gags you remember so you can tell someone else about them, not because you necessarily laughed. At least it gives you moments to ponder. Fire shows up a lot, and I wondered about that: the threat of it, the promise of it; the uncontrollability of it; the urgency of it. Why? Maybe because it can’t be put off or ignored by a man who likes things simple and just so; maybe because it makes things high-stakes for a man who would prefer it if nothing were high-stakes. A man who needs time, and bit of control… that, I can understand.