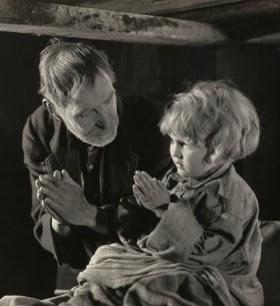 Last night the Toronto Silent Film Festival presented a very rare film, screened for the first time in this city since 1920 and for the first time, anywhere, in 40 years. We sat gleeful in our seats as The Jack-Knife Man began. It could have been a disaster and we’d have kept watching, just to say we'd seen it. But it was great. Last night was a good night to be a fan.

In 1920, director King Vidor’s most famous silent films, The Big Parade and The Crowd, were still years away. His Jack-Knife Man is something quieter, gentler; a really very sweet observation of bottomless kindness, bestowed by a simple man upon a boy who needs it, desperately. It has the structure of a morality play, as basic as the ones D.W. Griffith dabbled in before getting bolder, but I don’t think you’ll focus on that if you see it. I think you’ll focus on the befuddled righteousness of the ‘jack-knife man,’ Peter Lane (F.A. Turner), and maybe you’ll smile, too, at how quickly you trust this man with everything.

Peter doesn’t seem like the type you could count on. He’s a scruffy man of sixty-plus, eking out a life, alone, on the banks of the Mississippi River. He lives in a ‘shantyboat’—basically a floating shed, filled with scrap, plus a bunk, chair and work desk. He fiddles with a tin alarm clock he can’t keep running for long. Someone asks him why he bothers with it, and he replies that the clock is like a child to him. Peter has no idea about children.

Peter’s life is a contradiction. He lives on the periphery of society, but he has at least a few good friends. He takes no pride in his looks, but has the eye of the Widow Potter (Lillian Leighton), who scolds him as a helpless no-account, but only so he’ll decide to stay put, with her. He’s a hardworking man who owns a home, but the home is constantly adrift. This is not really a simple man. 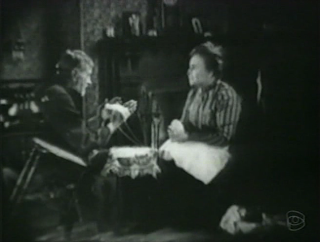 One night, during a terrible storm, a drenched young woman and her three-year old son arrive at Peter’s door. Really, they burst in. The boy, oblivious to propriety, toddles over to Peter’s woodstove and warms his feet; the woman, exhausted and oblivious in another way, is held by Peter, and for moment we see something sick and angry flit across her face. Peter doesn’t see it, but if he had, he’d still have tucked her into bed. He gives up his space to them, just like that, then spends the night in a haystack. By morning the mother is dead, and the boy, named ‘Buddy,’ is alone with his new ‘Uncle Peter.’

If Buddy had seen more of the world, he’d be terrified. And the same could be said for Peter Lane. Peter, like Buddy, sees the world as a child would—as a web of personal connections spun with a few strong strands; holding fast within a fluid space of constant new experiences. Buddy (Bobby Kelso) and his mom are the first of several characters who will set foot on Peter’s boat as if it were no more than a piece of unclaimed ground—just somewhere to pass through. Peter himself treats the rest of the universe much the same way.

What he knows, though, is that he must protect the youngster. This he never questions. He shields Buddy from the weight of his mother’s death, discovering how happy he can make him by whittling down pieces of wood into animal shapes with his jack-knife. Simple toys, but expertly crafted; each one-of-a-kind. Their idyll seems threatened, briefly, by the arrival of a true bum named ‘Booge’ (Harry Todd), who may have a more than a passing connection to the boy. But Booge, it turns out, is clever with words, a former teacher (he claims), an enthusiastic singer, not even that lazy, and decent at heart. He moves right onto the shantyboat, always just passing through, but not too quick about it. 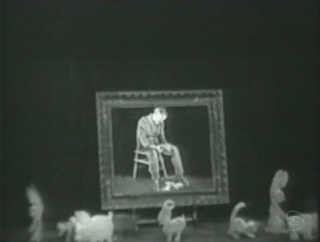 The Jack-Knife Man never takes these three to anyplace compelling; its story has almost no real tension, and though the relationship between the child and his two man-child guardians is imperiled, I never believed the results would be tragic. What twists the movie offers are the result of unlikely connections and dumb luck, desperately scripted. These sorts of things typically bug me, but they didn’t too much here. That’s partly because Vidor had a gift, even in these early days, for distilling humanity from even the most archetypal characters, reminding us that if we can judge a real person by singular characteristics, then so too can we be moved by a character possessing only that much.

It may also be the presence onscreen of so many older actors. Leighton was in her mid-40s by 1920; Turner and Todd were both over 55. It’s unusual to see actors of this vintage take the lead roles in a silent film, and their age brings gravity and peacefulness to the scenes. The Jack-Knife Man isn’t languorous; in fact, it moves briskly along, but the performances by these actors, all of whom have seen a lot of life and aren’t earnest to race through the rest of it, give the movie a depth greater than its theme, or script, would suggest. Like Peter Lane, The Jack-Knife Man is what it is, and much more than that.

Where to find The Jack-Knife Man:
The Jack-Knife Man was screened live on March 31, 2011, as part of the Toronto Silent Film Festival. It was a 16-mm print, borrowed from a private collection. Criterion may add this film to its roster in the future—that’s the rumor going around. They’d be wise to do it.

Accompaniment was provided by Bill O’Meara.
Posted by Chris Edwards at 5:25 PM