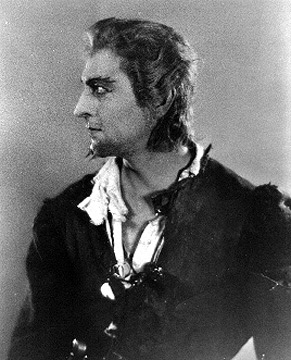 In the opinions of at least two eminent men, John Barrymore’s performance in The Beloved Rogue isn’t very good. One was Orson Welles, who said, regretfully, that his friend John was ‘not at his best’ in the role of medieval French poet and adventurer, Francois Villon. The other eminent, John Barrymore himself, agreed.
I don’t.
Barrymore’s a piece of ham in this film, I know. He flits through scenes on tip-toes and keeps a look on his face that I might have had at the age of five, before ripping the paper off a birthday present. That he’s dressed like Errol Flynn’s Robin Hood—in wintertime Paris, no less—is no help. But The Beloved Rogue is not really an actor’s movie to begin with, despite Barrymore’s and co-star Conrad Veidt’s statures and talents, so it’s better to measure Barrymore’s success in terms of how well he meshes with director Alan Crosland’s exceptional visual space. 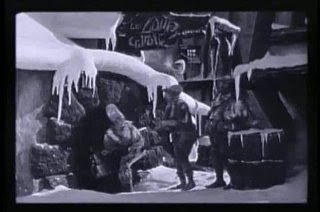 An outsized performance seems at home in an outsized world. Crosland, most famous as the director of The Jazz Singer (1927), here delivers Paris on a gigantic scale, often dwarfing Barrymore and everyone else with its towering walls, crowds of beggars and occasionally lurching, Expressionist lines. In dimensions, these sets rival those in Lon Chaney’s Hunchback of Notre Dame (1923), but the abstraction’s greater; not only the buildings but also their interiors, and even the mugs from which Barrymore slugs his wine, are oversized. The Beloved Rogue is an adventure comedy, always outlandish, even in serious moments. 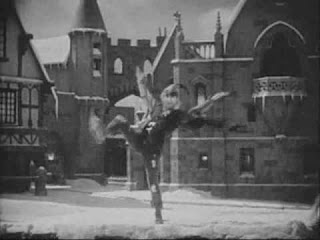 No wonder Barrymore acts like a kid. His Villon adores Paris life, and all the parties, ladies, wine and song that accompany it. He’s a patriot who appreciates French culture for its pleasures as well as its nobility. In his first scene he’s crowned King of Fools by the Parisian underclass (a great honour, for those who like to have fun) and holds court in the city square, dressed in full clown makeup with a little crown set on one side of his head. The spectacle is interrupted, first by the Duke of Burgundy, then by the King of France himself, Louis XI (Veidt). Burgundy (Lawson Butt), has fairly obvious designs on the French throne, making him an object of contempt to Villon; but Louis will not act against the man because the stars say it’s unfavourable. “Who are you, fellow?” Louis asks the poet. “The king of fools, as you are king of the wise, Sire,” replies Francois, bowing. You can imagine the sarcasm. So can Louis. He banishes Villon from Paris. If the poet steps inside the city’s walls, he will be hanged.
Louis’ willingness to guide French foreign policy by the stars and Villon’s personal fate by whim give The Beloved Rogue its momentum. Veidt’s king is everything Villon is not: timid, risk-averse, hypocondriacal, stupid. The actor does his best Richard III, hunching so low beneath his black robes that he almost touches his toes; he’s always overbundled and sweaty. While Louis sits huddled on his throne, checking star-charts and hedging his bets, Villon is sliding down snow-topped roofs and catapulting, literally, over the city walls, edict be damned. If birthright will not allow a man with a backbone to lead the people, we wonder how the king’s opposite can overcome. We wonder, and we watch. 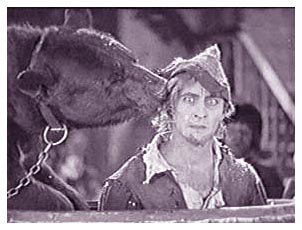 You’ll find here all the usual elements: there’s swordplay, though Villon isn’t much good at it; comic sequences with heavies and clowns and a dwarf; and the requisite pretty girl, played here, rather blandly, by Marceline Day. Day is the king’s ward, a noblewoman who loves Villon’s poetry but disapproves of his dissipated life. She’ll face peril, but not as much as he will.
Day has a couple of love scenes—scenes of intense affection, anyway—with Barrymore, but their heat owes less to the stars than to Crosland; he knew exactly what he had to work with in John Barrymore, filming the actor’s famed profile to particular effect. An early standout scene in The Beloved Rogue places Day and Barrymore, face-to-face, before an arched doorway. The doorway has a black curtain, halfway pulled across it. This puts Day before a black background and Barrymore before a light one. Barrymore’s sharp brow, nose and chin seem to point at her; they close the gap between his face and hers even as he stays still. 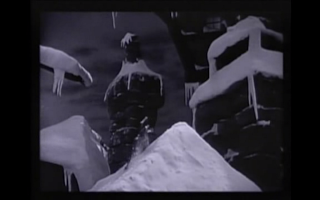 The camerawork is just as impressive in big moments. Watch as a catapult convincingly hurls bundles of goods over the city wall and toward the lens—toward you. See Villon scale a tower wall to save his love, get shot, and dangle by one arm from a jut of masonry. Later, bare-chested and slung up by ropes, he’s plunged into a fire-pit, then up and backward into a wall of spikes, again and again, as he strains against his bonds.
My favourite shot, though, is one of the earliest, and quietest: Villon’s mother, kneeling at the base of a great stake, where Villon’s father was burnt as a rebel the night before. Sticks are strewn over the ground around her. The stake is looming, enormous in the foreground, and topped with a raven, wings outstretched. Mme. Villon strikes at the carrion birds below, then runs her hands through the ash, grieving and fearful. Crosland shot this scene from above, as he did many in the film, and if it doesn’t promise great art to come, it certainly promises scope. This camera will climb the rooftops, viewers; it shall be as free as Villon himself.
Where to see The Beloved Rogue:
The Beloved Rogue was screened live on April 2, 2011, as part of the Toronto Silent Film Festival. Accompaniment was provided by Laura Silberberg. The film is available on DVD from Kino International.
Posted by Chris Edwards at 11:03 AM