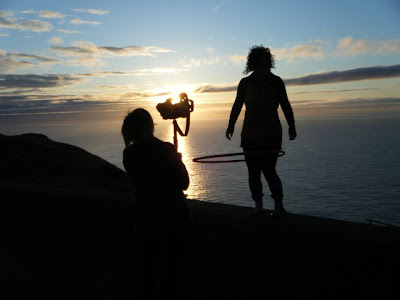 A few too many years ago, I told my parents I’d chosen History as my university major. They congratulated me. Then they asked what I planned to do with that degree—what I could do with it—because they weren’t sure. Neither was I. But I did study History, and never regretted it, and today, I blog about silent movies for free.

My parents didn’t question the value of history per se, just the wisdom of devoting one’s most productive time to studying it. If one did so, they felt, one ought to make a good living. They weren’t sure History allowed for this, and looking back, they were right to be concerned. But as an 18-year-old, idealistic in my own way, I opposed studying something for practical purposes. Enlightenment was the thing, and to dilute it just for the sake of paying rent revolted me. Despite the fact that my parents were paying the bills, I felt no need to justify my preoccupation to them, or anyone else. I wasn’t wise back then, but at least my un-wisdom was ferocious and uncompromising.

This paints a bad picture of 18-year-old me, doesn’t it? Sometimes I don’t like that kid. And he reminds me a bit—maybe a lot—of the protagonist in Urban Twirl, a minute-long Canadian silent, created by Newfoundland and Labrador-based filmmaker, Martine Blue. All this young woman wants to do is hula-hoop in peace; but the Newfoundland wharf on which she’s camped is too bustling. Her observers, in their own ways, wonder why she’s doing it, and she, in her own way, hates them for it. Embedded here are issues of acceptance and intolerance, the worst of which seems to boil out from her.

Urban Twirl opens with the young woman (Cara Lewis) awakening on the roof of a building, beholding a beautiful day, brandishing her hoop, descending to the wharf and starting to twirl. Two fishermen happen upon her, standing a little slack-jawed, just watching. One starts twirling himself, perhaps suggestively. The woman stops, sneers, and leaves.

She finds a new spot, starts again—and is discovered by little girls. Then by their mother, who takes her picture and drops a loonie (a Canadian dollar coin) before moving on. The dejected drifter finally discovers other hoopers twirling together on a rocky outgrowth. Beaming, she joins them. 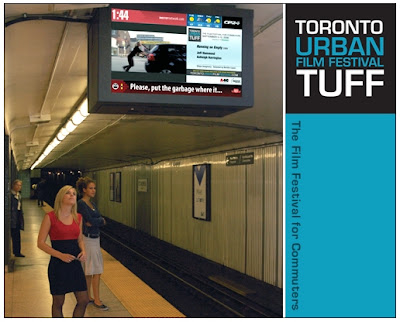 Sweet, yes? This woman does a thing because she loves it. It has no obvious, measureable value, which is not a problem for her, but seems to be for others, who commodify it against her will—for the fisherman, it’s a sexy dance; for the mom and kids, a busker’s act. For the hooper, though, it is merely grace in movement; autonomy and escape. The image of the circle helps distinguish their perspectives: The fishermen stand next to a pair of circular crab traps; the coin the mother leaves behind is, of course, circular too. Both the traps and the money are useful—in fact, they exist only because they serve a measurable purpose, for neither is particular beautiful to look at or inspirational to behold. The protagonist’s hoop, on the other hand, is a circular toy most people find entertaining but no one really needs. The hooper pursues her activity for the joy of it, is mocked for that, and then, finally, finds a community of like-minded people and gains acceptance.

This isn’t far from Blue’s intended message. I asked her the meaning of the hoop (the meaning of the act of hooping) and what her protagonist thought she was doing out on that wharf—Blue explained the character is homeless; it’s not easy for her to find completely private places to practice hooping, especially in St. John’s, NL.

I’ve never been homeless. I can’t begin to imagine what it’s like. I can only sympathize with those who are, and Blue’s explanation conjures sympathy in me for this character. But before that—when I had only the film to go on, I didn’t feel much. The hooper’s physical state isn’t degraded; she’s fresh-faced and a bit plump, and while there’s more than one way to be homeless, the way this woman has managed it does not make her appear that desperate.

Her demeanor is another matter. She seems insistent on performing an activity that draws attention, in a semi-public place no less, yet is indignant at being watched. She wears bright orange. Her observers are benign. Their curiosity, understandable. Blue describes a woman who views society as a puzzle of fragments, trying to figure out how they draw together, but on-screen, I saw someone less tolerant and less curious than that. A woman unwilling to adapt, and indignant at the suggestion she might.

A person dissatisfied with a multiplicity of views; who finds happiness only when absorbed into a community of those who think the way she does. 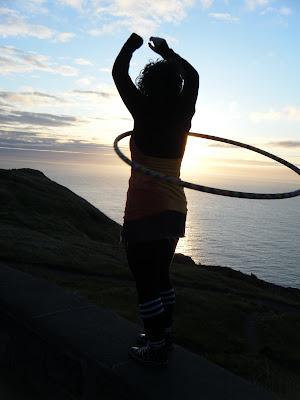 There’s a lesson in that. A valuable one for us; living as we do in a multi-channel universe, yet narrowing our gaze, as we tend, to channels supporting the views we already hold. I’m as guilty of that as anyone. Maybe that’s why I didn’t ponder the hooper’s story before judging her behavior. And maybe that makes me no better than her—or her audience on the wharf. It sets my mind to spinning, thinking that.

Where to find Urban Twirl:
Urban Twirl was screened this past September as part of the Toronto Urban Film Festival (TUFF)—run, with other TUFF films, in loops on the Toronto Transit Commission’s (TTC’s) platform-level information boards, operated by OneStop Media. The boards have no speakers, so any film shown on them must run silent. Urban Twirl, which won its TUFF category, ‘Urban Encounters and Other Stories,’ can be viewed on TUFF’s website.

Martine Blue is owner of the independent film and television production company, Dreamshake Media, based in Grand Bank, NL.
Posted by Chris Edwards at 11:02 PM