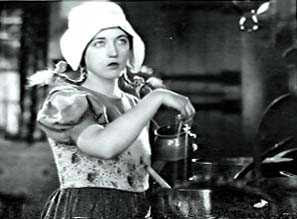 There are two moments of inspiration in The Red Mill, both borne on Marion Davies’ face. The first is early in the film, when Davies’ Tina, a Dutch servant, falls through the ice. Tina just won a skating race—first prize: a kiss from a handsome Irish tourist named Dennis Wheat. Poor Tina’s hauled out of the water, cased in frost, blank in expression. Dennis appears truly concerned, and for that she grins so wide that the ice crumbles on her cheeks and falls away.

Oh, I liked that one. It was cute, sweet, and funny—all the qualities director William Goodrich was aiming for in The Red Mill. And he achieves it again about midway through, when Tina, due to circumstances well-within her control, must present herself as a regal beauty before Dennis, who’s unaware she’s the frozen maid from the winter previous. Tina sits alone at a makeup table; products she’s never heard of (and does not own) lain out before her. She picks up a jar of facial mud. ‘One application guarantees Perpetual Beauty,” promises the jar. Tina smears it over her face, letting it harden into a mask, then pulls it away, revealing a glowing new visage. She’s the same Marion Davies, actually; just luminescent where before, we’re to believe, she was plain. And actually, she was never plain, especially compared to the rogues’ gallery arrayed around her in The Red Mill, but the cynicism about beauty—in the eye of the beholder as always, but the product, too, of chemistry and a succession of masks—in a romantic comedy, no less—is special.

This was an idea worth exploring further, but Goodrich didn’t do it. Nor did screenwriter Frances Marion, the guiding quill behind some of Mary Pickford’s best films, as well as this one. The Red Mill is, instead, a succession of gags, shallow and heatless, partly because the gags are so self-contained, and partly, I think, because Davies never makes Tina into more than the sum of her good looks and misadventures.

The Red Mill was adapted from a 1906 stage production of the same name. Liberally adapted, not just because the source material was an operetta, but because Davies’ own part—the lead role—wasn’t even in it. The original Red Mill was the story of a burgomaster’s daughter, in love with one man, but forced to marry another, wealthier, more powerful one. That story remains in Marion’s version, but is now a subplot: the daughter, Gretchen (Louise Fazenda) and the lover, Jacop (Karl Dane), now played as homely but lovable fools. Tina, apparently the only hired help at the inn where Gretchen’s holed up, spends her days in bullied servitude beneath the whip of a tavern proprietor, Willem (George Siegmann). She’s scrappy and accident-prone; a dreamer but a hard worker too, happy to roll up her sleeves and make the best of her lot. The movie suggests she’s an orphan. 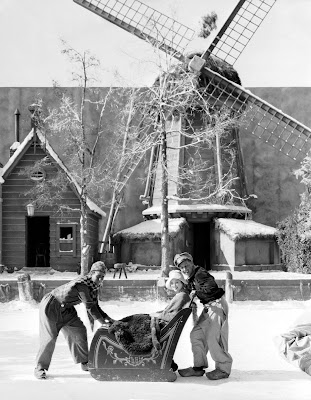 As you may know, I’ve been watching a lot of Mary Pickford films lately. So all this felt awfully familiar. I suspect that, for Frances Marion, the simplest way to add a starring role to a pre-written story was to crib from a formula she already knew worked well. The problem is that Davies, in this film anyway, is no Pickford.

She just doesn’t sell it. Davies is beautiful in The Red Mill, with delicate, tapering features and big eyes; catlike—the camera eats her up from the start. Her smokiness never ebbs, even in moments of humiliation, yet her acting is broad and declarative throughout. The combination doesn’t work. Pickford, also lovely, had a way of subsuming her looks to the role, redirecting her onscreen magnetism to suit the situation. She could look bad without being bad-looking. Davies seems unwilling or unable to do that here.

Bad for us, but good for her boyfriend, you’d think. Owen Moore plays Dennis as a flightly Euro playboy with a one-track mind. Given the way Tina flirts with him upon first meet, and the rather slim pickings (not an apt description at all, actually) surrounding him, Dennis’ disinterest in her is strange. “Wheat-Tine! We ought to get together for breakfast!” he quips, one of many cringe-worthy intertitles you’ll endure in this film. He has little else to add.

Tina spends much of the picture pining away for the love she lost, though she never really had it. Her efforts to help the stricken Gretchen eventually collide with Dennis’ romantic overtures, though whether it is her, Gretchen, or the combination of her looks and Gretchen’s wealth he’s really interested in, is unclear, at least to Tina. Much is unclear to Tina. What’s clear to us is that Tina’s dilemma—easily solved if even one character chose to be candid—seemed boring even to Goodrich and Marion. 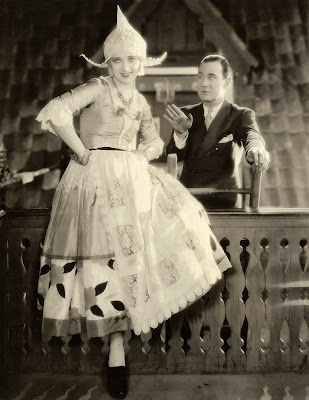 So much amounting to so very little. As The Red Mill pratfalls its way to a final showdown between Tina, Dennis and the villain in a haunted windmill, let us reflect on what gives it intrigue today, despite the fact that it isn’t very good. There’s the director, of course. ‘William Goodrich’ was a pseudonym for disgraced slapstick comedian Fatty Arbuckle, whose style is evident here only in the rotundity of his Dutchmen. Davies faced scandal too: the longtime mistress of William Randolph Hearst was onboard his yacht the day film producer Thomas Ince, another passenger, suspiciously died. And Frances Marion isn’t the only Mary Pickford connection here—Owen Moore was Pickford’s first husband, forever remembered as a frustrated drunk, overshadowed by his wife’s ballooning fame.

Mere trivia, but enough to make me pick The Red Mill first from a stack of DVDs on my shelf. It’s a half effort, unworthy, at least, of its director and writer, and possibly its star. But watching Tina and Dennis fumble through the ‘haunted’ windmill—scared shitless by bits of cloth in dim light and the thumps of bowling balls on wooden stairs—I can say the film ends poetically. The Red Mill is much ado about nothing, and these two, dim as they are, belong together.

Where to find The Red Mill:
My copy of The Red Mill is a made-to-order DVD, purchased online from the Warner Archive Collection.
Posted by Chris Edwards at 1:22 PM