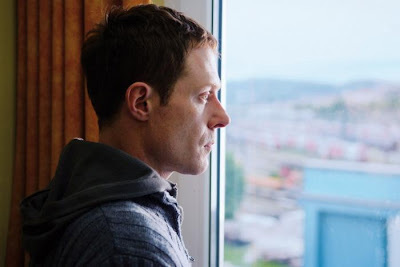 How maddening must it be to do time? How repetitive, how boring, even for a patient prisoner, dedicated to reform? Every day the same; every day passing in succession, while outside, things are moving on, and you know it. Would you fear the day you finally go free, dropped back into a world so far ahead of where you last remembered it?

The Robber (Der Räuber) is about a man who could handle this better than most. Johann Rettenberger is a convict at the end of a six-year prison term in an Austrian lockup. He has spent, you can bet, all 2,190 of those days running. He runs on a treadmill in his cell; in circle after circle around the prison yard—he’d probably jog on the spot if he had no other choice. His quarters are lined with white sneakers. “Training?” his parole officer asks. “I never stopped,” he replies.

Rettenberger’s story is based, somewhat loosely, on the life of an honest-to-god marathon-running Austrian bank robber, named Johann Kastenberger. Kastenberger committed his crimes memorably, wearing a Ronald Reagan mask and brandishing a shotgun at Viennese tellers. He must have made for great copy.

His fictional counterpart is distant from us. Andreas Lust plays Rettenberger as a cold and driven man; unwavering, unsmiling, and perhaps incapable of love, even for Erika (Franziska Weisz), the pretty young lady from his past who seems willing to pick up where they left off. It’s unclear what she’s done, if anything, since he went away.

Erika needn’t settle for a sociopath. She could have any man she wants: Weisz’s figure is an inviting, curvaceous one—even comfortable-looking, to a lover’s eyes. Her physicality is important to the film. She is soft and stationary; sexy, but not athletic. She lives alone in a large, book-laden house, heavy with wooden trim and furniture. She’s writes, which means she sits, a lot. Erika’s not going anywhere, and that alone makes her Johann’s total opposite. 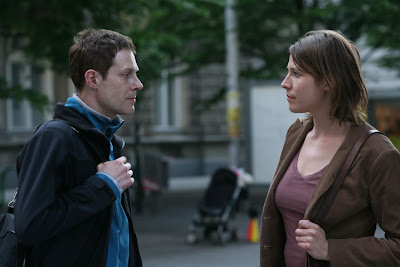 The whole of Johann’s life is movement. Nearly the minute he’s free (it seems), he’s back to robbing banks, craftily stealing a new getaway car every time, getting in and out of the banks as fast as he can. Like Kastenberger, he is disguised, and brandishes a shotgun. Bankers and customers wilt before his explosive energy and he’s quickly off.

Is it adrenaline Johann craves, or money? Or something else? Neither Lust, nor director Benjamin Heisenberg, seems willing to explain it. Unmasked, away from the banks, Johann again becomes the grim, enclosed, über-athlete; obsessed with his training regimen and unwilling, or unable, to adapt to life outside, even with a lovely woman in love with him. We don’t know what made him this way, and he doesn’t seem to dwell on it. We do know that he can run very fast, for a very long time. Many things about Johann are uncertain, but the running is indisputable.

There are incongruities. Johann has a second outlet: marathons, which he so dominates that it brings him local fame… which is surely a bad thing for a bank robber. So why does he do it? It’s not for the adulation, or the records he breaks, or the trophies. In fact, Johann’s marathon wins seem to nearly kill him, which may suggest some deeper point, but having watched a few marathon wins myself, I think it says less about him than it does about marathons. Whatever Kastenberger’s motivations were for running those races, Rettenberger’s aren’t made clear; they’re not even sensible, coming from such a ruthless and strategic thinker. 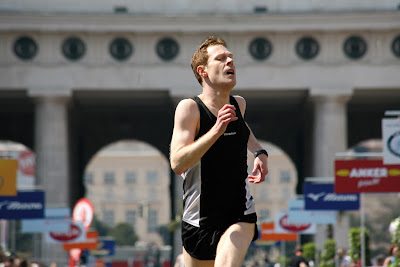 And there’s the music. You might remember the thumping base of Johann’s running sequences; long takes with almost a pulse beneath them—but for me, it’s the shallow synth-pop of the driving scenes that sticks out. Breezy tunes always turn up on the radio after Johann steals a car. He takes no pleasure from them either, it seems, yet he insists they play while he drives, his face remaining a furious mask of determination. Can you seethe to a Top-40 hit? Johann can.

What we’re left with isn’t a man, so much as a walking (and running) sum of capabilities. Johann has intellect, discipline and drive, but little compassion or warmth, and seemingly no purpose. The money stays in bags, in his room. Erika shares his bed, but not his secrets. The running drills go on and on; we appreciate the exertion, but can find no nobility in it—that would require an athlete who strove for something, who could be emotionally invested in something, and Johann may not have that ability. His approach is more militaristic—he trains so that his running, if required, will save his life. He seems not to care why he’s risking it. It’s no coincidence that Heisenberg likens an early marathon sequence to a military maneuver, complete with pounding beats and a helicopter. 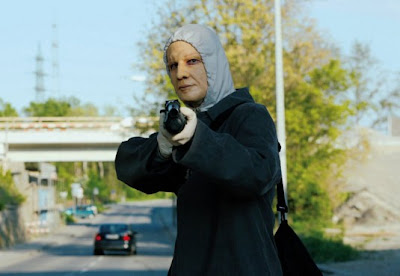 Like a lot of movies about fugitives, The Robber shows us a world closing in around one man. But I was surprised at how indifferent I felt during his escapes. Check that—I wanted him to get caught. It’s kind of inspiring to think that a top-rate chase scene, following an hour-plus of evading faceless persecutors, is still not enough to get the audience to root for one awful man. But what if we truly wanted him to get away? Then that chase would be epic. Nihilism and adrenalin don’t mix.

Where to find The Robber:
The Robber will have an exclusive engagement at TIFF Bell Lightbox for at least one week, starting Thursday, February 3, 2011.
Posted by Chris Edwards at 9:28 AM