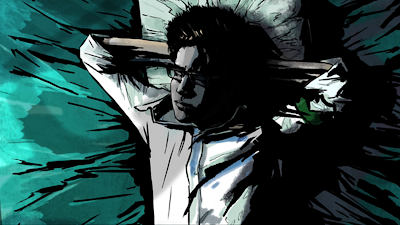 “Endurance is the only option that Iranians have.”

So wrote an Iranian blogger in summer 2009. He, or she, witnessed a disputed election, then its awful aftermath, and concluded that neither self-respect nor education was enough to combat repression; nor patience, nor even outrage, though all were components of the struggle. For Iranians pushing upward against the brutal boot-heel of their own government, it was also necessary, and noble, just to persist. Doing so meant calling again and again for reform from those who’d resort to arrests and beatings, torture, rape and murder to silence them. These stakes were no secret to anyone, anywhere on earth—not in the Digital Age. Yet President Mahmoud Ahmadinejad remains in power today, and so The Green Wave, rather than simply documenting events of almost two years ago, remains a call to action: not only to those yearning for freedom in other lands, but to those still yearning for it in the filmmaker’s own.

Democracy’s in the news lately. As I write this, relatively peaceful protest movements have brought an end to autocratic regimes in Tunisia and Egypt. Bahrain, Yemen, and yes, Iran, face popular challenges too. Western leaders seem supportive, at least of the principles undergirding these movements. Of the outcomes, less so—Islamophobia plays well in some quarters, and a politician can present himself, or herself, as awfully cagey while spouting it, even if he, or she, knows zero about the situation.

That’s our problem. The problem for characters in The Green Wave (and they are, in one sense, characters) is a state that treats citizens like “criminals and riff-raff.” They resent it; hate the thuggery that oozes down from pulpits and presidential suites to the streets of Tehran, battering anyone with the gall to ask “where is my vote?” During 2009’s Green Revolution, hundreds of thousands of Iranians did ask, surely dooming Ahmadinejad. He didn’t have the votes to win re-election. 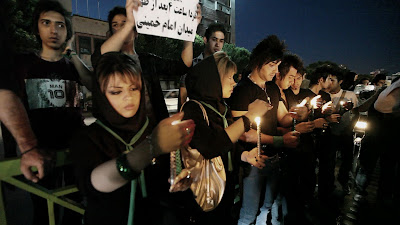 We all know that election was rigged. We know the result was further protest, then a horrifying response—we heard the news, and read the blog-posts and tweets that escaped the stranglehold of the Iranian state. Most were anonymous. We heard and read much more than we saw. The Green Wave takes this fact and makes of it an aesthetic.

Director Ali Samadi Ahadi provides us with grisly footage of the post-election crackdown, much of it grainy, cellphone-quality stuff, though a patch of red on grey cement has its own clarity. The Green Wave is less a documentary, however, than a series of memoirs, the horror stories of activists, average citizens, professionals, and most chillingly, a militia murderer, all narrated in English over cartooned imagery. 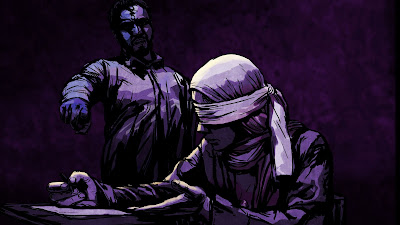 The drawings are bold and realistic with thick, black borders and tense lines. Though some are animated, they always maintain a static quality, like paper dolls. The drawings don’t replace people, just represent them. They give us something to look at while we listen to the victims’ stories: mostly through narrations of their harrowing blog-posts. Perhaps these are the faces we’d give the people, if we had no visuals at all? They’re weary women with scarf-wrapped heads; a young man with tear-filled eyes behind crack lenses; a prison guard, all crazy stares and teeth… 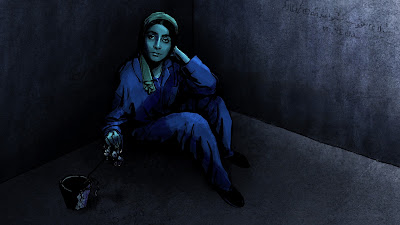 …Are these ‘idealized’ images? That seems like the wrong word, but ‘stylized’ wouldn’t be any better. I was distracted at times by the beauty of the cartooned protestors. They weren’t just beautiful in terms of their cause and their courage, but literally so. And the villains: haggard and animalistic and ugly. Perhaps it’s human nature to put appealing faces on those we admire, but why do it here? When Ahadi departs the animated sequences and delivers the commentary of various Iranian intellectuals—journalists, lawyers, activists—we’re struck not only by the crispness and clarity of their faces, but also their normalcy. They’re not subject to anyone’s imagination, or caricature, however favourable.

Foremost, in any case, are the words of the Iranian people. One blogger describes the arrival of the secret service at her home, and the imprisonment and torture that followed. Another, a doctor, remembers her hospital filling with corpses, and the agents of the government carting them away in pickup trucks before the bodies could be identified. The most terrifying story comes from a young man arrested and held in the Kahrizak detention center. All around him are bodies, dead and dying; the remnants of assault and violation, but he can barely see them. His cell is so dark that he can only hear the agony.

What counts is what the darkness hides. Ahadi reminds us of this when fades to black during a scene of violence, but leaves us with the sound. Transcriptions of tweets appear on-screen, each with a bleep, like a sonar note, set against a fuzzy murk. And how strange, notes one of the talking heads, near the end of The Green Wave, how blind Western leaders can be concerning Iran’s human rights record. “There are consequences,” he says. “The crimes of the leadership are being documented.” Yet even the bloggers fear what victory might mean. Another voice, anonymous: “I will rebuild you, my Homeland, even if I have to use the clay of my body to do so.” 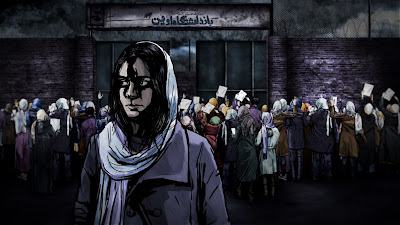 The achievements of Ahmadinejad are counted in broken bones and obliterated lives, and one day, he’ll be gone. Whoever replaces him need not be our enemy, and won’t be, if we see them as a collection of people first, and an ideology and faith, second. “This green scarf gives me a heightened sense of responsibility,” cries reformist Mir-Hossein Mousavi to a cheering multitude, early in the film. “It is the flag of Islam.” His wife spoke, too.

Where to find The Green Wave:
The Green Wave screens at 8:00 pm, Tuesday, February 22nd at Toronto’s TIFF Bell Lightbox; it is the opening film of the 2011 Human Rights Watch International Film Festival.
Posted by Chris Edwards at 3:54 PM