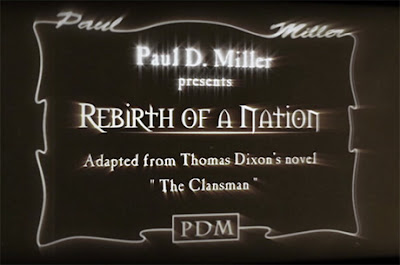 Who ‘owns’ The Birth of a Nation?

In literal, legal terms, no one. The silent debuted in 1915 in the United States, making it public domain. So you might say it belongs to all of us. It’s part of our shared heritage.

Some would prefer that it wasn’t. As I’ve written elsewhere on this blog, Birth of a Nation is an irredeemably racist film; and despite being a groundbreaking technical achievement for its time—and a supremely well-made film for all time—it will never again be appreciated more than it is reviled. Things were once much different, of course. Audiences in 1915, while not unified in praise, still made Birth of a Nation the most profitable silent in history. It received presidential sanction and rejuvenated a then-moribund Ku Klux Klan. It was long hailed as the greatest of U.S. motion pictures, despite this last fact.

Birth of a Nation is too historically important to ignore, and too egregious to celebrate. It is a cultural tension-point. So for those with an interest in film, or politics, or both, it is a must-see. And for those with artistic ability themselves, it is the starting point for further discourse. So it was, and continues to be, for U.S.-based hip-hop musician, turntablist, author and producer, Paul D. Miller, aka ‘DJ Spooky’. Since 2004, Miller has toured the globe with his own, substantially altered cut of Birth of a Nation, called Rebirth of a Nation; a live show in which Miller re-edits the film on the spot using various dj techniques, accompanied by musicians. I saw Miller’s performance the other night at the Bell Lightbox here in Toronto; it was a packed house. While Miller did not do a live edit that night (working, instead, from a precut version) he did handle the music, alongside the I Furiosi Baroque Ensemble, who accompanied (if that’s the right term for what Miller does) on strings. 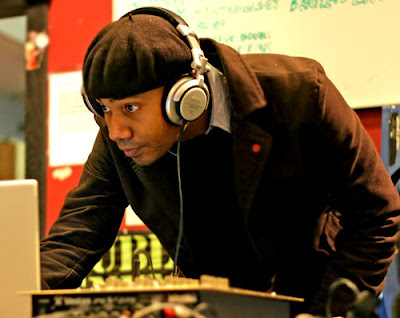 Rebirth’s total running time is about 90 minutes—half the length of its source material. But Miller doesn’t simply chop Birth of a Nation up. Most scenes are intact, or at least accounted for; they just seem shortened. Where he really goes to work is in manipulating the context of director D.W. Griffith’s images. He opens Rebirth not with early scenes from the film, but with a beat-heavy montage of nationalist symbols, including the American and British flags, the yin-yang, and the Confederate battle flag. We also see archival footage recalling notable moments in 20th Century civil rights history, and most memorably, a stagey, early-sound era sitdown with Griffith himself, who argues for the necessity of the 19th Century Klan and the trueness of his film—reflections punctuated by pensive drags on a cigarette, while young white children listen at the doorway.

Miller now stakes his claim, boldly, with digitally altered versions of Griffith’s opening title cards. Now ‘Paul D. Miller,’ not D.W. Griffith, presents the film; the cursive borders now feature ‘PDM’ instead of ‘DG.’ The symbolism of an African-American artist taking ownership of this most bigoted of American films makes this sequence, originally quite formalized and bland, into one of Rebirth’s most powerful.

Miller has said the following about Birth of a Nation: “[It] has been a historical object of fascination for me for a long while—it’s been one of the defining images of America in the 20th Century…Birth of a Nation focuses on how America needed to create a fiction of African-American culture in tune with the fabrication of ‘whiteness’ that undergirded American thought throughout most of the last several centuries: it floats out in the world of cinema as an enduring—albeit totally racist—epic tale of an America that, in essence, never existed…By remixing the film along the lines of dj culture, I hoped to create a counter-narrative, one where the story implodes on itself, one where new stories arise out the ashes of that explosion.”

Birth of a Nation didn’t so much focus on America’s need to create a national myth as embody that need—but I see Miller’s point. He achieves his counter-narrative here by altering his source material both visually and aurally. Lines, sometimes grids, are superimposed over familiar scenes (I believe Miller called them ‘vectors’ in the Q & A following the film)—an effect that reminded me of a flow chart or schematic. The intent is to highlight connections between characters and suggest their trajectories or potential alternative paths. Miller also ‘zooms in’ on characters at key moments, and encases both characters and objects in floating shapes. The scenes themselves are ‘encased’ in a static box made to look like an ornate picture frame. This was done for technical reasons, but the design also heightens the feeling that we are watching an artifact—it keeps us conscious of observing something, rather than allowing us to be immersed in the viewing experience. 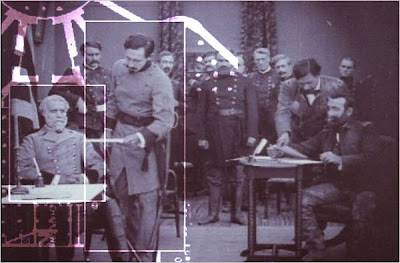 In other words, we remember that we’re an audience. Rebirth encourages us to be self-conscious this way—indeed, it would not exist if such self-reflection were not necessary, and it wouldn’t work unless it were possible. The artistic success of a film depends on three elements: (1) visuals; (2) musical accompaniment (more crucial in silent films than talkies, since in silent film the music is ubiquitous and imminent, so that even its absence is a performance element); and (3) audience perception. Audiences are not passive—they bring to a film certain assumptions and familiarities that can affect the film’s capacity to affect them. While Birth of a Nation’s visuals have not changed in a century, society has changed a lot, and so its imagery, once grandiose, now seems perverse. It doesn’t work as Griffith intended. And this, in turn, impacts one’s choices of musical accompaniment. Even Miller’s.

If you watch a lot of silent films like I do, you become very sensitive to a bad score. Bootleg or just cheaply distributed silents often have generic scores that are wallpapered over the visuals to pitiful effect. Even more thoughtful scores can go wrong and do great damage—imagine a silent comedy scored with grim music, or worse, the reverse: a grim scene, scored up-tempo. It happens. In Birth of a Nation’s case, the problem is a little different. To compose a score sympathetic to it—that is, one suitably brassy and triumphant, or ominous, as befits the fear and indignation of the white characters—is to make the images even more obnoxious. And that dissonance between what’s onscreen and how audiences react to it is mostly why viewing Birth of a Nation today is so unsettling. 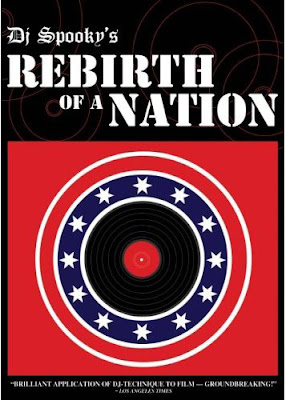 Miller’s new score draws heavily from his background in hip-hop and electronic music and is, I believe, an attempt to be sympathetic to the audience, rather than the movie they’re watching. He doesn’t prop up the images, he pokes them with a stick. That’s a smart move, and pretty interesting. I noticed it most in the infamous scene where Southern belles Maggie and Flora Cameron (Miriam Cooper and Mae Marsh) are imperiled by a home invasion of carpetbaggers and Negro soldiers in Union garb. At this point Miller’s music becomes noticeably more aggressive, more like gangsta rap (a friend suggested to me that it wasn’t, but that’s how it sounded to me, a white non-listener, and perhaps there’s a point to be made even in that); the choice ends up mocking the lily-white Cameron girls’ fear of the black man, exposing it as the embodiment of upper-class white paranoia that it absolutely was. And that we, in 2010, immediately recognized it to be. 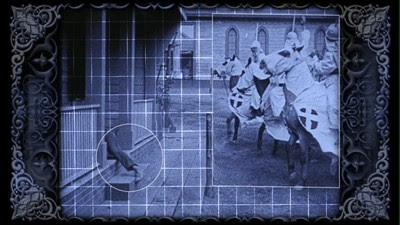 Rebirth occasionally overloads. The closing 30 minutes of Birth of a Nation, originally a series of sustained moments of tension as the Ku Klux Klan rides to the rescue, is so blitzed by Miller’s effects that the audience is left with nothing but visual debris. This hurts Rebirth in cases where Griffith’s own imagery would make Miller’s point on its own… Like one of the film’s most frightening moments, when the Cameron patriarch holds a pistol over his daughter’s head, ready to bludgeon her if the enemy breaks through the door. Miller sees this, and tries to highlight it in his usual fashion, but there’s too much going on.

Miller’s cuts make Birth of a Nation seem more breathless and hysterical than it actually is. Lost in translation are the precious minutes Lillian Gish used to craft her character, Elsie Stoneman; muted, too, is the depth of the film’s set design. Miller focuses on those elements of Birth of a Nation that most matter to him, and will most impact a modern audience. But if one has not seen the source material, one might wonder how any of its white characters, unjust as they were, felt human even to audiences of 1915.

Which brings me to my last concern: most of the audience I was part of, in 2010, hadn’t seen the source material. I know, because Miller opened the evening by asking for a show of hands, and few went up. It’s not Miller’s job to educate people about silent film, nor to encourage them to watch Birth of a Nation, but I wish more of them had. Rebirth is not a replacement for Birth; it’s a meditation on it. And Miller knows the danger of confusing the two. From the quote above (a cut of my own, I guess): “As we enter the 21st Century it sometimes helps to know, like the philosopher Santayana said so long ago, that ‘those who do not understand the past are doomed to repeat it.’ ”

Those who attended Rebirth of a Nation saw a fine piece of art by a gifted artist. But could they truly understand why their forebears, nearly a century ago, filled theatre after theatre to see Birth of a Nation?


***Addendum: A few days after posting this I received a note from one of Paul Miller's reps, who noted a couple of (positive) peculiarities about the Toronto show. First, it was presented with one screen, rather than the standard three; second, it was accompanied by live musicians--also not standard, though Miller was delighted with the results.