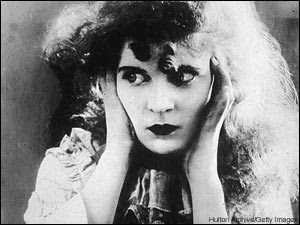 You can’t appreciate—fully, appreciate—The Birth of a Nation unless you can watch Ku Klux Klansmen gun down or scatter a militia made up entirely of blacks, and cheer. And if you can do that, I don’t want to know you.

This is how Birth of a Nation quells discussion. It is such a piece of bluntly racist propaganda; so relentlessly bigoted, particularly in its second hour, that it’s impossible for anyone to discuss the film’s artistic and technical merits in isolation, though many try. They talk about director D.W. Griffith’s ground-breaking editing techniques, which give the film its dramatic potency. They talk about its unprecedented popular appeal. True, true. Even at 180 minutes, Birth of a Nation absolutely flies by.

And then there’s its star, Lillian Gish; the supreme queen of pantomime, weaving her tale with minimal intertitles and no histrionics. She’s perfect for Griffith, who relies on old-fashioned prescriptive intertitles to get his point across. He merely sets Gish up, and she goes to work.

There’s charm in the film, too; borne in the depth—the literal deepness—of its scenes. Something’s almost always going on behind the main players in Birth of a Nation: a card game between two guards; a doctor tending to the arm of a wounded soldier; slaves working the fields. There’s a whole world here. Griffith worked very hard to create this place.

But have you seen it? Will you see it? Unlike the equally bulky silent, Metropolis, which can be restored, promoted, and toured across North America, there will be no celebration of Birth of a Nation. What was once hailed as America’s greatest film is best-known today as an expertly crafted, three-hour smear. 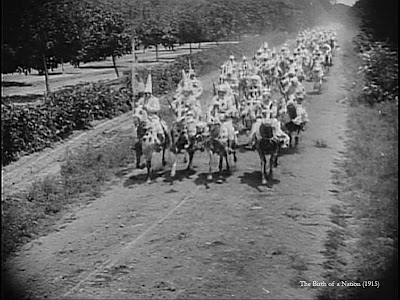 In trademark Griffith fashion, Birth of a Nation juxtaposes great events like the Battle of Atlanta and the Assassination of Lincoln with the personal stories of fictional individuals; in this case, two families. In the South, in Piedmont, live the wealthy Camerons, a dignified older couple with two boys and two girls—emblematic of their parents’ good breeding, robustness and fertility. They own many slaves. In the North, in Pennsylvania, lives the powerful congressman, Austin Stoneman (Ralph Lewis), his daughter, Elsie (Gish), and sons Phil and Tod. Stoneman is a virulent abolitionist, but we’re not to like him for it. He’s a mixture of Thomas Gradgrind and Richard III—an ugly, dyspeptic jerk with an obvious wig, poor constitution and legs two different lengths. He lusts after his mulatto servant, who seems as unbalanced mentally as he is physically.

Birth of a Nation’s narrative begins prior to the Civil War, with a visit by the Stoneman boys to Piedmont, where Phil is smitten by the lovely but vacant Margaret Cameron (Miriam Cooper). Her strange sister Flora (to be played in adulthood by Mae Marsh) looks on. Meanwhile, Ben Cameron (Henry Walthall) receives a picture of Elsie (he’s never met her) and falls in love. He’ll carry her picture with him through the years of war to come, leading to a ‘meet cute’ between the two in a soldier’s hospital that, I have to say, works beautifully. 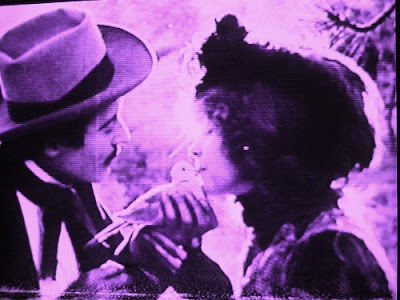 Griffith explores the consequences of the Civil War and Reconstruction through the suffering of these children. Neither the younger Cameron sons nor Tod Stoneman survive the war, but Ben and Phil do, distinguishing themselves in battle, standing chest to chest and bayonet to bayonet with their fellow whites in mutual displays of valor. And all three daughters are threatened by black or biracial men at some point; the Cameron girls narrowly escaping rape (one doing so only by jumping off a cliff), and Elsie resisting, with all her might, a proposal of marriage from the Machiavellian mulatto, Silas Lynch (George Siegmann). 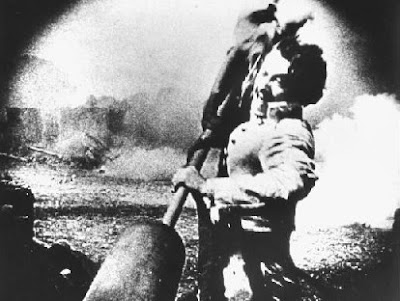 Propaganda can be art—even great art, as Birth of a Nation is—but it’s always less about uncovering or illuminating truths than it is about spurring an audience to action. I believe even Griffith feared what Birth of a Nation could unleash in people. He knew his depiction of Piedmont under ‘black rule’ would trigger rage in a white audience, and so he filled his film with caveats. This is, we’re informed, “an historical presentation of the Civil War and Reconstruction Period, and is not meant to reflect on any race or people of today.” Historical reenactments are certified accurate: Griffith’s Ford Theatre set, we’re assured, is “an historical facsimile of Ford’s Theatre as on that night, exact in size and detail, with the recorded incidents, after Nicolay and Hay in ‘Lincoln, A History.’ ”

But his film isn’t factual. Austin Stoneman never lived, nor Elsie. Nor the Camerons—at least these ones, and the Klan wasn’t founded by a Cameron, either. No slave is beaten or killed in Griffith's ‘historical reconstruction.’ Their democratic takeover of the South Carolina legislature is vaudevillian farce—representatives eating fried chicken at their desks; prevailed upon to wear shoes indoors and leering at white women in the viewer’s gallery. Griffith claims this scene is based on a photo; well, I’d like to see it. Never mind that these ‘black’ characters often aren’t black at all. His cast is an obvious mix of African-American actors and whites in black-face, with the latter taking the plum roles. Birth of a Nation is simply weird the way it reconstructs scenes with such scrupulous care, then populates them with caricatures. 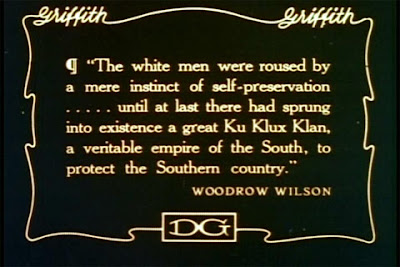 Looming large over the film—all of it—is Griffith’s inability to acknowledge injustice at its most obvious. Time and energy is devoted to the tragedy of war: that it might split apart a People once united by their shared ‘Aryan birthright’; that a gentlemanly Southern culture, supported by slavery, had to be destroyed in the process; that the defeated South must give the franchise to freed blacks, who have the nerve to vote for their own; that laws allowing interracial marriage are enacted as a result; that whites and blacks must share the sidewalks as equals; that the Ku Klux Klan must be formed to reverse as much of this as possible. Yes, we see Union soldiers fall alongside Confederate ones (sometimes literally). Yes, members of both races lose their lives. But only the white South has a fate worth lamenting. I could defend this on purely dramatic grounds, but Birth of a Nation claims to be balanced. It’s just unworkable.

With the blacks disarmed and disenfranchised (Klansmen actually sit on their horses in front of the polling booths, intimidating black voters), and the Camerons and Stonemans linked by a double wedding, Birth of a Nation draws to a close. And I think back to what worked, and what didn’t: I think of the beautiful sets, Gish’s genius, the electric pacing. I remember those moments that rose above maudlin sentiment. I remember Ben Cameron returning from the war: broken, beaten and haunted, finding his family home ransacked. His eyes seemed dead then. He trudged up the porch steps and faced the door. And from inside, his sisters’ arms unfurled and enveloped him and pulled him inward—as though Home itself were taking him into its embrace. How resonant those gentle arms were later, when Ben Cameron, now a torch-lit Klansman, stood with his brothers over a terrified black man, sentencing him to death. The arms of the monsters held his limbs and dragged him into their collective maw. This is Birth of a Nation. 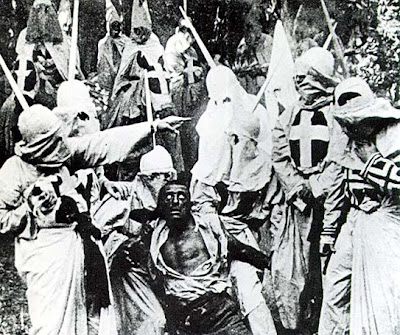