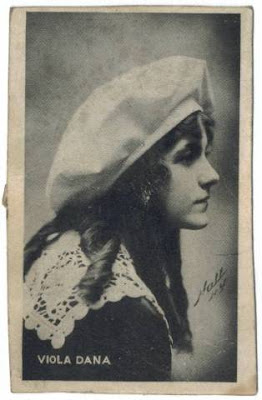 ‘Girl Without a Soul’ sounds like some zombie film you’d watch behind the wheel of your ’56 Bel Air Hardtop. But this rare silent ignores the supernatural, focusing instead on the all-too natural fears caused by emotional abuse. The result is a tightly-packed piece of psychology, unravelled only in the final reel, when things turn out too much like we figured they would.


The soulless girl in question is Unity Beaumont, a young teenager played believably by 23-year-old Viola Dana. Unity is blessed with good sense but no obvious talent. Without talent, she’s worth little to her obstinate father, Dominic (Henry Hallam)—a musician and violin maker who puts artists on pedestals and non-artists on a regimen of chores.

With Unity’s mother gone and the girl herself an artistic dud, Dominic’s life might have held little meaning. Luckily for him, Unity has a twin sister, Priscilla. Priscilla has all of Unity’s beauty, none of her work ethic, and far more talent for violin-playing, which is all Dominic needs to know. She’s also in the thrall of a moustachioed jerk named Ivor (Fred C. Jones), who fills her head with promises while his eyes drift well below her poised bow.

Dana plays both parts, making sure to improve her posture and devolve her attitude as the camera turns from nice girl to mean one. But the film’s real villain is Ivor, not Priscilla, and very soon we forget her arrogance and simply pity her fragility. For all her ‘soul,’ she is far weaker than her sister.

Unity’s lived her whole life being told she’s nothing, but she’s smart enough, and/or lucky enough, to have caught the attention of a local blacksmith named Robert (Hiram Miller). Robert is a good looking, clear-seeing, morally pure country-boy—one of many who populated American silent films. He recognizes Unity for the gem she is, and though poor, he has no qualms about wedding the unfavoured daughter of another poor man. He busies himself with their marital plans while Unity heads to boarding school and dreams just as much about him. Meanwhile, Priscilla’s road grows rockier. Ivor speaks to her of fame and glory—dreams that are but a cash-injection away from being realized—and Dominic cannot protect her, since Ivor is a patron of the arts and Dominic, after all, values Art the most. How can Priscilla fight back? Her ego’s founded solely on the praise provided by her father, and in place of him, now, is Ivor, with his silver tongue and lingering touches. One man’s approval supplants another’s, and Priscilla’s only response can be to please him. For her dad, it was enough that she played well, but for Ivor...

Well, first he needs the money. Priscilla knows where to get it, too; thanks to Unity, who told her about a stash Robert keeps in his desk drawer. It’s actually the church’s money, which he’s holding in trust. Priscilla sneaks into Robert’s house and steals it all. The theft puts suspicion on Robert, whose subsequent trial consumes the third act. But the troubles of this man’s man are likely temporary. To me, his court drama was far less interesting than a small scene in which Viola Dana, with the envelope of money in her hand, is happened upon by Ivor.

In the cinema of the 1910s, a good woman was a chaste one, and a good man didn’t try to change that before the wedding day. A bad man would try, but his attempts couldn’t be portrayed literally. Directors got around this various ways, and while the results often seem innocent or prudish today, they occasionally add depth of the story. In Girl Without a Soul, we see Jones’ vile manipulator looming over the smaller Dana as she slips the envelope into the neck of her blouse, out of his reach—unless he chooses to keep reaching, which he does. Dana places the money next to her heart, and Ivor will exploit both to achieve his ends. Seeing this, I remembered Conrad Veidt, roughly mugged in Different From the Others (1919), and Greta Garbo, whose sex scene in The Mysterious Lady (1928) sees her put a hand to her breast only a second before her lover’s hand reaches it.

The merger of money and flesh allows Ivor to violate his charge in perpetuity—today through her body, tomorrow through her family, since his greed not only risks Priscilla’s future, but Robert’s too, and then even Unity’s. It gives the scene more symbolic heft than a literal depiction of rape ever could.

Too bad the end of the film isn’t so subtle. With the church’s money still unaccounted for, Robert is hauled before a judge and tried in the most loose-ruled courtroom ever manned. Unity, her father, and eventually, Priscilla, all address His Honour at will, attacking or defending Robert’s character as each sees fit. Drama gives way to farce, and then to Keystone kaperdom, as our hero breaks free and chases down the villain in a high-speed horserace.

Boo to that finish. I don’t care about Robert, nor do I care if Ivor gets caught. The real heroes of this story are two young women who learn to believe in themselves. They both needed saving at the start of the film, and all it got them was humiliation. But when Girl Without a Soul is over, Unity and Priscilla have learned self-preservation. If Ivor'd taken every cent they had, they’d still come out winners.

***Btw, I don’t know if Girl Without a Soul has any direct connection to Stella Maris (1918), another movie about two imperfect young women, both played by one actress—in this case, Mary Pickford. One of those characters is named Unity Blake, and I can’t believe the name was that common. Any ideas?
Posted by Chris Edwards at 10:50 AM