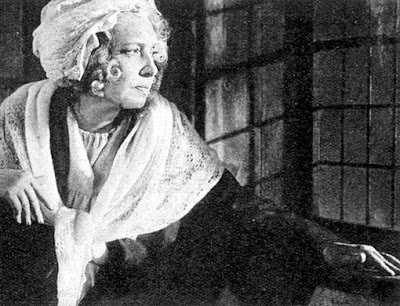 Gösta Berling’s the worst kind of screw-up: the talented kind. He was the best preacher his parishioners ever heard. He cared about them. But he was also a drunk, who emptied a bottle every night and found truth at the bottom. And so Gösta (Lars Hanson) got defrocked. Such was a deep-drinking, deep-thinking lad’s fate in 19th-century Sweden.

The Saga of Gösta Berling is about a preacher’s fall, at least on the surface. It’s also about Greta Garbo, who appears here as Elizabeth, a role that would bring her to America’s attention soon after. But there’s so much more. Over the course of an immense, but swift-moving 184 minutes, Gösta Berling takes aim at the foundation of society itself. That is, the tension between inspiration and deviance on one hand, and convention and conformity on the other. Both are necessary; both can be abused. And it is Gösta’s suffering, far more than Elizabeth’s, which makes this point. Don’t take my word for it, though; take Mauritz Stiller’s. He directed Gösta Berling, and though a supporter and friend of Garbo’s, even he was willing to keep Elizabeth off-screen for half the film.

He had enough on his plate. Gösta Berling has a huge cast—more than 20 actors play significant roles—and a Dallas-like plot filled with bed-hopping rich folk, awkward expirations and shady lines of inheritance. I won’t even try to summarize it all. What you need to know is that Elizabeth is the Italian-born wife of a Swedish clod named Henrik, who stands to inherit the Borg estate. The legality of their marriage is in question. Meanwhile, Gösta burns his time as a ‘Knight of Ekeby,’ one of a dozen potbellied vagabonds and loafers who serve as entertainment for Margaretha (Gerda Lundequist), her husband (‘the Major’), and their guests. In case this sounds cruel, let it be known that the knights deserve little better, and Margaretha, though she’s committed sins of her own, is easily their moral superior.

Margaretha will come to embody Stiller’s vision, but Gösta’s story introduces it first. Early on, we revisit his life as a preacher, with its debauched binging and brawling, punctuated with symbols of dull industry. Gösta rages against nihilism in a pub, while at the bar behind him, an employee mechanically cleans one glass after another. Then we’re told Gösta’s drinking causes him to miss services, and Stiller shows us the bells of his church, rocking back and forth, steadily. When he finally takes the pulpit, ostensibly to save his job with an explosive sermon, he first rotates an hourglass beside him. 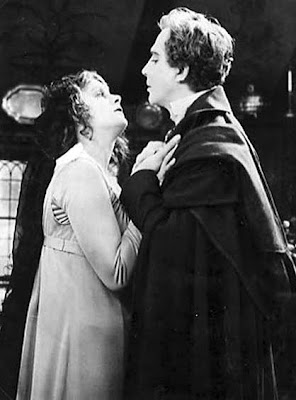 Gösta is a turbulent man—a mix of booze and ecstatic religion—and the closer he comes to destruction, the more powerful Stiller’s contrary images of steadiness become, and the more oppressive they feel. With all this and more in mind, on a cold winter’s eve, Gösta prepares to end it all. He is stopped by Margaretha, who could stop anyone.

Margaretha pulls the pistol from Gösta’s head and throws him to the floor. Then she deflates his nonsense: “You won’t escape by turning yourself into a beautiful corpse,” she tells him. “Don’t you know most people are dead already?” Now she plants one snowy boot by the fireplace and tells him her own, secret story of infidelity. Margaretha risked her reputation for a lover and still benefitted from her status as the wealthy Major’s wife. But it brought a curse upon her, levelled by her very own withered, bitter mother. As she tells Gösta, “At that moment I knew Margaretha Celsing was dead. For she would never have struck her mother. I’ve disowned my mother, yet I live on. Why should Margaretha Celsing be dead and Major’s wife live on?” Like Gösta, she now faces down the chattering classes and the status quo (really, just variations of the ever-ringing church bell) by being her own person. Not that it’s brought her happiness.

Lundequist apprehends Hanson with a powerful bearing; wrapped in furs, eyes steely, face framed with wild, white hair—what’s the word I’m looking for? Tough? No, tough won’t do. Her Margaretha is mighty; a broad-hipped, strong-shouldered woman who can withstand and mete out the punishments of life in equal measure. When her secrets are later made public, her fall is fittingly memorable.

Margaretha leaves her home with but one servant in tow, and finds her elderly mother. The old woman is in her shack, slowly pushing a grain-grinder with all her weight. Around and around in circles the old woman turns. Likewise has her life unfolded, we suspect—in predictable formation, without change. Margaretha joins her mother in the grinding, and then, in outlook. She returns home from her exile and sets the Knights’ Quarters on fire. As each bum flees the flames, she has him tied up, loaded on a cart, and shipped away. Margaretha thus cleanses herself of these men, the literal manifestations of her moral failure. Yet it is false healing, and we are made to know it, as the flames spread and destroy the rest of her home.

Will Margaretha recover from her fundamentalism before it’s too late? Will Gösta deviate from a life filled with self-pity and broken hearted females? Film history demands that, in addition to these questions, we ask what Greta’s been up to all this time. The answer is not much, though the final act of the film is largely hers.


Garbo fans will be shocked by her look in Gösta Berling. She’s much heavier and her hair is a brunette bird’s nest. But the face is the same, and it’s notable that, despite MGM’s celebrated makeover, the studio taught her nothing new about acting. When she falls in love with Gösta, we know it, as we always do when Garbo’s called upon to show us her desire. It is unmistakable and, if this film is any indication, it was innate.

Elizabeth is that elusive mix of passion and stability that Gösta has never been able to find. And so, the last hour of Gösta Berling slowly develops—perhaps, devolves—into a more conventional love story. The conclusion of that affair, one way or the other, will determine whether Gösta’s saga (the word is sometimes translated as ‘redemption’) will succeed. However, the film is at its best when revealing the titanic struggles of Margaretha Celsing. Watch it for Garbo, if you wish, but prepare yourself for much more. The Saga of Gösta Berling uses its time most wisely.