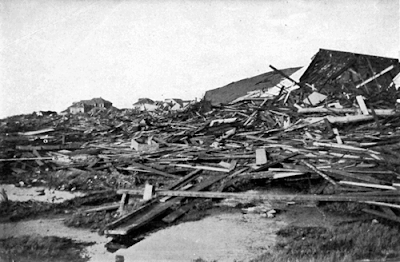 Stacks before the static lens, the
rubble of the homes of Galveston.
In them
the men and women
and children
of Galveston.
Hidden, broken, beneath the beams.


Action:
(Centre) Man with businessman’s hat and white shirt—
man with no task before the camera—
back turned to the lens,
finds object.

Viewer’s aside:
(What must a man fear finding here?
The wise ones stick to industry.
The shattered ones alone would choose to ponder
this mountain of timbers and what holds it up; this
jagged
pile of corpses and wood.)

Action:
Man with businessman’s hat and white shirt
places object down most delicately.
Eases self to bottom of frame
most gingerly.
Bottom of frame,
not bottom of pile.
Bottom of pile’s below the frame—
twenty feet below or more.
You cannot see beyond the lens,
to the bloating core of blasted Galveston.

Where to find Searching Ruins On Broadway for Dead Bodies, Galveston:
This film, a one-minute piece of footage documenting the rescue effort following the Galveston, Texas flood of 1900, is one of many brief, early films found Disc One of Kino International’s must-have, four-disc set, Edison: The Invention of the Movies.

A somewhat blurry version can be found at Wikipedia Commons. No audio here, I’m afraid.
Posted by Chris Edwards at 11:36 AM