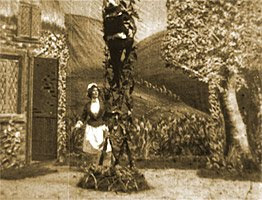 Jack’s not exactly a model for capitalism, is he? A young man, the son of a hardworking single mom, no less, he’s charged with selling a valuable cow in the village market, hopefully for a hefty price. Instead, he sells it for magic beans. When the beans turn out to produce a giant beanstalk, Jack neglects to charge admission fees for viewing this biological marvel. He doesn’t even chop it down and yield a record volume of plant matter for harvest—which would have recovered the cost of the cow. Instead, he ignores his poor mother and climbs the thing. Once aloft in the cloudy kingdom above the stalk, Jack ingratiates himself to the kindly wife of a Giant. She invites him into her castle, and he proceeds to rob the house of several bags of gold, a singing harp, and a goose that lays golden eggs. When the Giant understandably pursues Jack, it’s the Giant who is murdered. Jack’s reward for incompetence, then theft, and finally, murder? A life of luxury.

The less said about Jack’s motivations, the better. Appropriately, then, the film considered here says almost nothing about Jack at all, except once, when it does so quite memorably. Jack and the Beanstalk, a ten-minute film dating to the very dawn of narrative film-making, is more an act of translation than a think-piece. You know the story, you know the players. What you haven’t seen (at least, if you’re alive in 1902) is the whole thing in front of a camera.

Jack and the Beanstalk’s director is Edwin S. Porter, the Edison Company’s most significant contribution to film history. The earliest movies were about a minute long at most—they were really just scenes, self-contained and unable to support developing action. Porter, a former film distributor, was one of the men who proved those scenes could be strung together to tell a tale. His movies look primitive today, with their fixed camerawork, theatricality and uneven pacing, but they are real achievements.

Jack and the Beanstalk opens on a very stage-like set, featuring an obviously painted backdrop of a medieval village and countryside. An old charlatan is given a hatful of magic beans by an enchantress, who (thanks to the wizardry of stop-motion camerawork), disappears. The charlatan is startled by this, but recovers himself before the arrival on-screen, and on-stage, of Jack. Jack is leading the cow, which is quite clearly two men in a cow-suit. (Thumbs down to the actor in the front-end of that suit, who does his damndest to steal the scene by performing a two-step during the transaction.)

Porter’s major weakness was his tendency to let scenes meander on. Once Jack leaves the stage, this portion of the film should end, yet it doesn’t. Instead, we’re treated to a short knockabout sequence between the cow and the older man. Another such moment occurs midway through the film, when Jack, who's already climbed up the beanstalk, out of camera-range, attracts the attention of other children below. The scene should cut immediately to Jack in the clouds, but instead, we have to watch the children join hands and dance around the base of the stalk. Moments like these are sometimes necessary in stage productions, where time is a constant and actors may need extra seconds or minutes to move from one place to another, or change wardrobe. In a movie, it’s just excess. 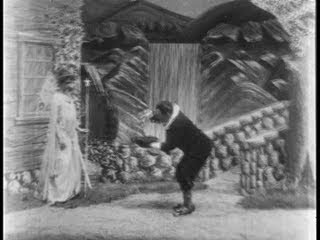 Jack’s scaling of the beanstalk (a step ladder swathed in vines) is achieved by having the actor climb from the base to the peak of two successive stage sets, then into the middle of a third one. The three backdrops are inconsistent in their use of media: the first appears to be painted, the second (to my eyes) looks like a charcoal rendering, while the last is a moonlit junglescape with a highly reflective, plain white floor. Here is another theatrical convention (one I wish modern directors would occasionally revisit). Porter, aware that he cannot fool the viewer’s eye, instead contents himself with letting the viewer’s imagination knit the visuals together. Among other things, this allows him an extra level of abstraction that strengthens the film’s visual power, rather than simply making it look fraudulent.

Jack is naturally weary after the climb. He’s awoken from his slumber by the enchantress, who first appears in a reclined pose on the crescent moon above him. And that’s appropriate, because the actress playing her is about as disinterested in her role as you could get. Usually, actors from this period are too animated, but this one just stands still, waving her wand with one hand like a fat guy handling a garden hose on a hot day. The enchantress makes the moon disappear and projects in its place a circular window, in which Jack can see the Giant’s castle. ‘Loot it,’ she must be telling him, though she doesn’t seem the vicious type.

The Giant, it turns out, is merely tall. He plays his role with gusto, however, and is dismissive enough of his wife to make us sympathize with him a little less. Porter, with fairly limited time on his hands, wisely condenses Jack’s three robberies into one.

Two scenes rescue Jack and the Beanstalk from mere quaintness. One is a piece of superior film technique, showing what the newer medium was really capable of. We know that Jack, scurrying down the beanstalk with the Giant in pursuit, must chop the beanstalk down. This will cause the Giant to fall to his death. Porter has no choice here but to use a dummy, but he uses his camera to make the most of it. With Jack already on the ground, we see the Giant’s foot poking down from the top of the set. Porter now cuts, and we see the dummy’s foot instead. It is the dummy that crashes to the earth, and as soon as it connects, Porter cuts again, reinserting the actor. The whole mass of the beanstalk drizzles down across his body, turning into his burial mound. It’s a smooth scene for the period, dramatically effective, and well-paced.

Jack’s second notable scene is a dream sequence, which takes place during the evening the beanstalk grows. Jack is asleep in bed, on the extreme left of an attic set. The rest of the frame is empty. Porter now occupies the space with a vaguely vine-like shape, with a hole in the bottom. Out of the hole pour bags of gold, followed by a dancing harp and a goose. Finally, there is an egg, which grows bigger and bigger, until it splits open to reveal his mother, dressed in fine robes.

The composition of this scene is not new; really, it’s no different than seeing a comic strip character with a thought balloon. But the energy of the vine’s contents, particularly the aggressive growth of the egg, is off-putting and weird. That’s a good thing. We have a sense of turmoil—even guilt—in Jack’s mind. It’s the only glimpse we’ll ever get, and it’s thanks to a series of stop-motion techniques no stage production could manage.

For a description of another dream sequence, similar to the one used in this film, but very different in tone, see my essay on Richard III (1912).

Where to find Jack and the Beanstalk:
Jack and the Beanstalk can be found on Disc One of Kino International’s four-disc set, Edison: The Invention of the Movies. The film is preceded by a short commentary from two film scholars. A grainier version (though not by much, frankly) can be downloaded from YouTube.
Posted by Chris Edwards at 1:07 PM