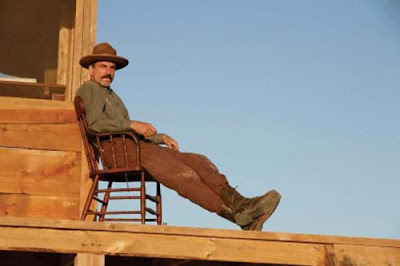 I saw There Will Be Blood not long ago. Notable note: If you google 'There Will Be Blood' and 'silent movie,' you'll get quite a few hits.
Some of these reference the DVD extras, which include a 25-minute silent documentary on oil production, called The Story of Petroleum. Others consider the movie itself. A lot of writers seem to remember its opening sequence, which introduces us to Daniel Plainview (Daniel Day Lewis) without using dialogue. His refusal to let a busted leg keep him from his claim says more about him than words ever could, clearly. This sequence really isn't that long, but it stands out.
Is it really so strange to be introduced to a character before he utters a word? Surely many movies open with a 'day in the life'-type sequence, following the main character through his or her regular routine. Such scenes are usually scored, and if the character says anything it all, it isn't important.
Imagine following a pretty rom-com heroine as she rolls out of bed in a daze, pours a coffee, skips breakfast, rushes down the steps of her Manhattan brownstone, squeezes herself onto the subway, squeezes out of the subway, climbs up to the street, enters an office building, pushes into a packed elevator, jogs out of it to a busy newsroom, and lands heavily on her cubicle chair, kicking the computer's power button with her foot.
Now we know where the heroine lives and what she does, more or less; we have her larger context. However, we'll likely rely on dialogue to give her a name, a list of key relationships (wait for that desk phone to ring), and no doubt, a work-related problem, to be revisited in the third act. These are her intimate circumstances, and her reactions to them determine the bulk of her character.
There Will Be Blood starts you with nothing but the character study. There's no immediate context to Plainview's personal trek down the shaft, just the act of it. Like the rom-com heroine's tone of voice when she answers the phone, we learn most of what we need to know from watching him react to adversities.
Still, it's misleading to compare this sequence to silent film just because nobody's talking. This isn't a silent scene, it's a dialogue-free scene in a sound movie, and really, every talkie has those. True silent characters talk all the time--you just can't hear them. You can even see their lips moving. But when Plainview talks, you can hear him fine.
I also thought There Will Be Blood had a 'silent' feel, but due to different elements. One was the score. In real silent films, the absence of speech adds power and prominence to the score, and certainly, Jonny Greenwood's dread-heavy music stands out in this film, too.
The movie's economy of characters is another silent hallmark, especially since many are archtypes (the Innocent, the Simple Poor Folk, the Zealot). They have names, but they don't need any. Even the Plainview character could have been scripted without a name. He's an unvarnished bastard; he's a negative force and no attempt is made to reclaim him for the sake of fairness or understanding. While the character possesses some admirable qualities--determination, chiefly--we can't sympathize with his plight; only observe him, as he works.
Plainview rises up, destroys those around him, then descends and decays into a wretched old millionaire. We sense the inevitability of this arc. If he doesn't evolve, how could he end up any other way? What we take from this is not a story, or even a rumination on a ruined life--it's much closer to a lesson. 'This is what happens when you...'
I've seen a lot of silent films that give lessons. Plainview is at home beside dozens of early silent villains who achieve disaster so that we might avoid it. D.W. Griffith, to name but one example, produced many movies about such men. They weren't oil men necessarily--some were politicians, bankers, grain merchants, etc. They may not have been greedy, either--their sin might be cowardice, lust or indifference. They weren't individuals (even if they were named) so much as types of people, and the viewer was to be made aware of them. In so doing, viewers were trained to spot bad apples, then avoid or resist them. A few viewers might even be spurred to reform themselves.
Daniel Plainview isn't flawed; he's wholly, perfectly awful. And like (some) silent villains of old, we can watch him, and take heed.
Posted by Chris Edwards at 5:43 PM