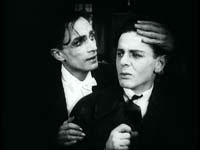 Activist films, as they age, face a gradual reckoning. What shocks one era may not shock the next; assumptions evolve or reverse themselves; problems are solved—often, the most pointed ‘message movies’ are the first to seem antique. We appreciate them for being ahead of their own time, but they’re still behind our own. They can no longer run a current of indignation through us.

Different from the Others is, well, different. It’s still ahead of us, or at least, most of us. This silent film is about homosexuality, and it approaches the topic with more blunt conviction than any film, from any era, that I’ve seen. Men hold other mens’ hands in this movie. They caress and comfort one another. They suffer and die for the prejudices of others, for whom the film has no sympathy. The oppressors are not pious, they’re bigoted—and through knowledge, they can be healed.

This is a long introduction, but the movie requires one. Different from the Others was an artistic attack on Paragraph 175, part of Germany’s Penal Code, enacted in 1871. Paragraph 175 carried sentences of up to five years in prison for men convicted of engaging in ‘unnatural vice.’ The law sent many to prison, and left far more at the mercy of blackmailers. In 1894, German sexologist Dr. Magnus Hirschfeld (1868 to 1935) challenged the law, stating first that homosexuality was a victimless crime, and second, that it was no crime at all, since homosexuals represented a natural, ‘third sex.’

Hirschfeld moved few. However, circumstances changed considerably in 1914, when the First World War provided new, enormous challenges to German sex educators and hygiene specialists. Hirschfeld saw storytelling as his means to reach the public. Teaming with director Richard Oswald (1880 to 1963), he created a series of educational films, aimed at building public awareness of venereal disease, abortion, prostitution and other taboo subjects. When film censorship was temporarily lifted following Germany’s defeat, Hirschfeld and Oswald got more ambitious. Different from the Others was produced in 1919—and banned the following year. Today, it exists only in fragments, totalling perhaps half its original running time.

How can you judge a movie that’s half gone? Fairly easily, it turns out. Different from the Others has been reconstructed quite coherently through the use of a partial print, a contemporary description of the film, and production stills. It helps that the majority of the missing footage concerns a subplot we can do without. Now running a lean 50 minutes, the restored film retains two compelling elements—the performance of lead actor, Conrad Veidt, and a jarringly modern take on perhaps the chief social controversy of our day.

Veidt plays Paul Körner, a renowned solo violinist and closeted homosexual. The film opens with Paul reading news stories about notable suicides; all of whom, Paul’s reaction suggests, were gay. He imagines a procession of persecuted gay figures, placing da Vinci in the queue next to Tchaikovsky, Oscar Wilde and others.

This scene does its job, establishing Paul as a serious character with serious problems, but it also makes a point. Germany in 1919 already has a gay community—it must, or Paul could not be so disturbed by the news stories. Further, that gay community is embedded deep in European society, as evidenced by the procession of historical figures. The film asserts—immediately—that homosexuality is natural and everywhere. It is uncompromising.

Following one of his concerts, Paul is introduced to aspiring violinist Kurt Sivers (Fritz Schulz). Kurt is a big fan, and very innocent, and pretty cute. Paul apprehends this ingénue with worldliness and genuine pleasure—he’s glad to accept Kurt as his student, but he certainly doesn’t gush. Here we might expect the film to be coy, or even symbolic, in depicting the seduction. Instead, Paul grips Kurt’s forearm for a long moment, leaving no doubt of his orientation or intent.

Paul has come to terms with who he is. However, he is a public figure who cannot afford his gayness to be commonly known. He also has familial pressures. Following his introduction to Kurt, a long intertitle informs us that Paul’s parents have set him up with an eligible lady socialite, in hopes he will settle down. On paper, the match is good—Paul is broodingly handsome, respected and wealthy. However, he rejects her. From a subsequent intertitle, we learn that Kurt’s parents are concerned about his pursuit of the violin, though his sister, Else (Anita Berber) defends it. The intertitle confides that she is attracted to Paul.

There’s no footage of these scenes. Aside from a few production stills, all scenes involving the Körner and Sivers families have been lost. However, Paul’s greatest threat remains intact. This is Franz Bolleck (Reinhold Schünzel), an extortionist and thief Paul has met before. Franz just happens to encounter Paul and Kurt walking arm-in-arm in a park (a foolish thing to do, under the circumstances) and demands hush money from Paul, who bitterly agrees. Kurt knows nothing of it. 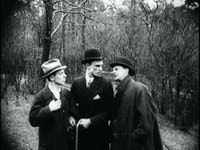 Schünzel’s performance is much like Oswald’s direction: Neither man seems interested in going below the surface of the material, yet both benefit from the depth that material inevitably creates. Franz is a piece of shit; an unrepentant predator who trolls the gay community for victims. He sneers and smirks his way through every dastardly act, until we’re ready to be rid of him. He’s more a social problem than a person; a consequence of bad law and public ignorance. Yet the character is fascinating, because in his own way, he is as comfortable with his own sexuality as Paul is. Through a long flashback, we learn that he’s targeted Paul before, allowing himself to be picked up at a gay masquerade ball by the violinist and taken home. Once there, we see Franz clutch Paul’s hand, then pull away and open his own, gesturing for cash. Paul pays, but it isn’t enough. He sinks into his armchair in despair. Franz then reaches into Paul’s breast pocket and roughly pulls out his billfold. He both robs the gay man and sexually assaults him.

If Franz grows tiresome, it’s because the director lingers too long on his face. Overlong, static takes were a mistake made by many early silent directors, but certainly not by 1919—Oswald just isn’t that gifted. Luckily, his subjects require minimal art. This kind of movie sets out its mission from the opening frame and it’s the job of the actors (and the director) to fulfill roles, not create them. Aesthetically, there isn’t much more to say, although Oswald’s reliance on blacked-out backgrounds and tight, circular framing can generate feelings of stress and intimacy, respectively: 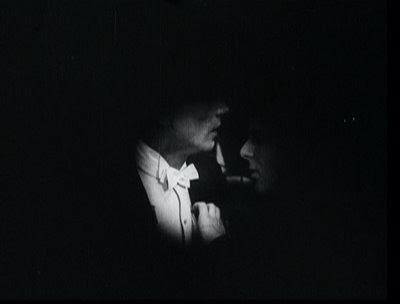 Franz’s demands for money do not end. Paul snaps and refuses to pay. Desperate, Franz breaks into Paul’s home, where Kurt discovers him. They begin to brawl, with Franz gaining the upper hand until Paul intervenes. The crook is driven out, but before he goes, he tells Kurt: “Don’t get so excited. After all, you’re getting paid by him too!” The disturbances of the day are too much for Kurt, and he flees the relationship.

Next comes a remarkable scene, as Paul and Else attend a lecture conducted by Magnus Hirschfeld. Hirschfeld plays himself, and indeed this is a lecture, as the film pulls aside its own curtain to deliver an extended explanation of then-current gender theory. It’s intriguing stuff, though without drama. With our lesson complete, Else approaches Paul and declares, “Now I understand everything. I want to dedicate my life to you. I want to be no more than a friend to you.”

(Like all of Else’s scenes, this one is missing. And that may be for the best, because even its description is unconvincing. If Anita Berber’s performance was at all effective in building sympathy for Else, the result would have been worse.)

Despite the triumph of the lecture, we suspect things won’t end well for Paul. Bad endings are the reason movies like this exist. And indeed, Paul is outed, sentenced under Paragraph 175, fired by his concert promoter and ostracized by his friends and family. He finds solace in a bottle of pills and the film concludes its case. Veidt’s death scene, by the way, is excellent.

Is Different from the Others ‘good,’ or just too important to ignore? Veidt’s performance is top-rate (as always), but time and the censors have robbed us of many potentially good scenes between him and Berber. The movie’s direction is only workmanlike. Subtlety is absent. But the clarity and zeal with which Different from the Others delivers its message is totally compelling. The flat-out weirdness of seeing these politics in a silent movie add to our fascination. And its wisdom, we suspect, can only grow more obvious. When Hirschfeld bombastically declares, “through knowledge to justice!” we have to admit that yes, progress has been made. Though 90-years-old, Different from the Others is still pointing past us, and will continue to do so for some time. After all, Paragraph 175 was only struck down in 1994.

Where to find Different from the Others:
The movie is available on DVD from Kino International:

Kino should be commended for the crispness of the print, which is as good as one could expect. However, the absence of any special features on this disk is maddening. I can think of no film more in need of them. Different from the Others exists as a response to complex social conditions and could only be enriched by a feature-length, scholarly documentary. It’s not like we’re lacking space here, either; this is only a 50-minute film.
Posted by Chris Edwards at 11:00 PM