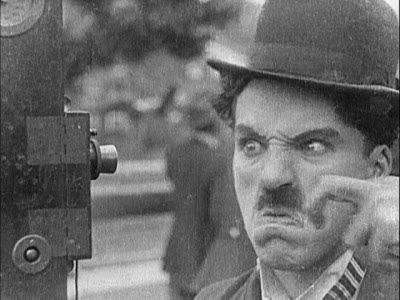 As reported by my noble colleagues at the Toronto Silent Film Festival, today is the ninety-ninth anniversary of Kid Auto Races at Venice (1914): the first public appearance of Charlie Chaplin's Little Tramp. The film itself is simple and brief, and Chaplin would go on to do much better, even for Keystone. But, for providing the world with its first glimpse of a character who would go on to be one of film history's greatest icons, Kid Auto Races will always be a big deal.

(For the record, my first exposure to the Little Tramp was through a parody... on Sesame Street. That's how deep this character is sunk into popular culture.)

Of course, given that this is a silent film blog, I've written about Chaplin many other times too. Here is a list of those links, for your leisurely reading pleasure: