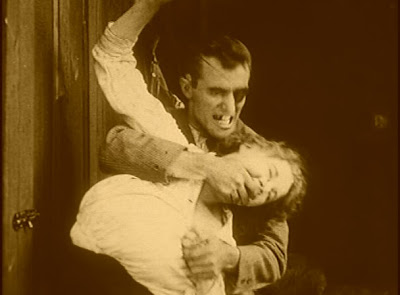 Marie Deering sits at her dinner table, dressed to the nines. Beside her is the new D.A., promising to sweep the streets clean of gangsters. He’s already pleased with himself. Marie turns to him. “Really though,” she says, “they must be awfully interesting people.”
Aren’t they just. Raoul Walsh, the man who directed this scene, certainly thought so. Regeneration was one of the first of many movies he made about lowlifes, redeemable or otherwise. It’s a strange story, about men and women outgrowing the roles they’re expected to play. Stranger still, since the film itself seems to do the same thing.
Our hero is a man named Owen, whom we meet long before his days as a street-tough begin. He first appears as a ten-year-old, in a tenement, sitting alone; while down on the street, his mother’s body is loaded into a hearse. His next door neighbors, a childless couple, lay claim to him immediately. They don’t pity him, but they do need labor. And so Owen belongs to them, just like that.

The transience of the boy’s life is startling. Robbed of his only support, there is nothing between Owen and destruction but two grossly unqualified would-be parents, who take him in on a whim. They have no one to call and no paperwork to sign. Their apartment is filthy and filmed with grease. In the tenement stairwell, a dirty infant sits alone on the stairs. For Owen, it’s this or the street.
I know enough about tenement life in this period to know that Walsh isn’t exaggerating much. Yet he imbues these scenes with a mythic feel. His camera zooms in, slowly, on rooms of people; building tension for events that have yet to unfold. It denies us the comfortable distance that films from this period typically allowed; composed, as they usually were—and as Regeneration, mostly, still is—of medium shots, and the archetypal characters those shots produced. 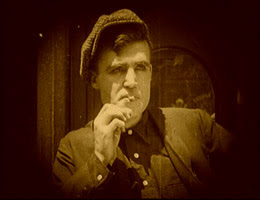 We’ll see several gorgeous close-ups: beginning with one of the boy, looking down from a window to his mother’s casket; his face illuminated, everything behind it dissolved into black. The effect of this shot, and the several that follow, is not to enhance our familiarity with Owen. It doesn’t ‘humanize’ him. I think, what it does, is make him glorious. Owen is a striking child who will grow into a striking man (Rockliffe Fellowes). Whatever bad stuff he’s up to, on-screen or off, must stand in contrast to this. It cannot be the whole of him.
Owen is special. He becomes a gang leader at age twenty-five, due to possessing, the title-card tells us, a complete assortment of the virtues gangsters most admire. He’s feared and respected and can lick any mug in the room, and still, he has some social graces. Women might call him the perfect man; or at least, a diamond in the rough. But surrounding Owen is poverty, crime and despair. And, most memorably, ugliness: we get blunt shots of a morbidly obese man; and another one with facial tumors, and another one, sleeping off a binge while flies crawl across his face. Owen’s best pal, whom he saves from a beating early on, has deformed limbs.
What are these men supposed to be? They’re grotesques, certainly: depicting a world we’d be wise to avoid, and within which Owen stands out. But they aren’t bad men. Few of them do harm. Owen’s pal is loyal, heroic, and even shows an interest in social reform. Maybe Walsh means us to feel like we’re seeing truth, not just the gargoyles in some morality play of the type audiences in 1915 had sat through again and again? 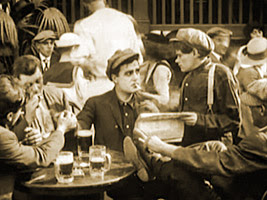 It’s hard to distinguish between what Walsh was trying to do in Regeneration, and what he was simply trying to get away from. But his purpose seems certain enough in the elegant symmetry of his protagonists’ lives. Owen is the hood who must climb out of the gutter; Marie (Anna Q. Nilsson) is the pampered and lovely but equally aimless socialite, shaken out of her privileged stupor and now committed to uplifting the poor.
Both, the film tells us explicitly, are possessed of a better nature. Neither has let it shine. Neither has been encouraged to do so. Class is not the issue here—notably, the film’s most repugnant character is not a gangster, but the D.A. (Carl Harbaugh): a demagogue who shows his true colors when finally denied a thing to which he feels himself entitled.
I wish I could give away the ending. It’s as double-minded as anything in the film. Like many of the gangster flicks that would follow it (some directed by Walsh), Regeneration explodes: all the smart talk, ploys, and codes of conduct disintegrating before act upon act of brutal violence. But…but… there’s a deathbed scene too: where a shooting victim points to the ceiling, and there appears, in the air, a graphic of a stone tablet, bearing the words: “Vengeance is mine, saith the Lord. Romans 12:19.” This kind of pictograph was rare in film, even by 1915. It was a relic of the aughts.
Old habits, and all that.
Where to find Regeneration:
Regeneration is available on DVD through Image Entertainment. The disc also includes Young Romance (1915).
Posted by Chris Edwards at 5:06 PM