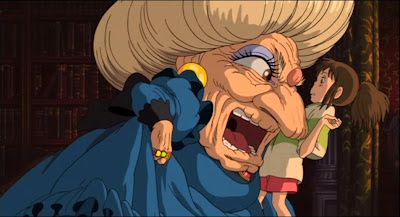 It must be difficult to be ten, but I don’t remember it that way. For me it was a comfortable time. I was an only child, just like Chihiro, the little girl in Spirited Away. Like her, I had two parents who loved me; I wanted for little, including attention, and was given the space to think for myself and study what interested me. But Chihiro faces through one experience I never did, and it’s a big one. And it doesn’t involve gods, demons or magic spells.

You could spend a lot of time analyzing meanings in Spirited Away; somewhat futilely, I think, at least for a Westerner, for whom some of the symbolism, and even certain mundane objects, like clay tablets in a bath house or sleeping mats in a bedroom, would be unfamiliar. Better to marvel at director-writer Hiyao Miyazaki’s ability to capture in drawings the universal truths of human life. Spirited Away, his greatest film, presents real childhood in all its peevish awkwardness, offering us a girl who is not so much likeable as familiar; so much so that we cannot dislike her, anymore than we could dislike ourselves. That Chihiro is depressed and pissy about moving to a new home is understandable, even though we know, in the long run, it’ll prove to be small potatoes. For her, right now, it’s not.

Leaving things behind—that’s what all of this is really about. Chihiro’s already been forced to abandon the home she’d known. Before long, she’ll have to abandon childhood itself; and she’s just now old enough to begin fearing that. When her family’s car stops by a narrow archway, and, within the hour, her parents are transformed and unable to help her, Chihiro gets her first taste of what adulthood has to be. 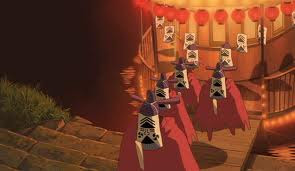 Where Chihiro is spirited away to, in the wake of these events, is a wonder of moviedom. Miyazaki mines, I can only assume, the very deepest depths of Japanese mythology to populate his Divine Bathhouse—a hotel-spa for a pantheon of demons, gods and assorted spirits, helmed by a witch. Beings of all sorts stroll in columns: a pageant of the real and imagined. Having seen the film a decade ago, I can tell you that these bizarre creatures—particularly the bejeweled, mammoth-headed witch and the obese patron with the lily-white skin, stay with you. But the film is more than these wonders. It makes the bathhouse a place real enough to believe in.

Compelling fantasy and horror stories—for me, anyway—are those set in familiar places, or at least, in strange places where people still have to deal with familiar problems. How delightful is it that Chihiro, if she’s to avoid her parent’s fate, must apply for a job? And that her success is determined by her ability to negotiate a legally binding contract? This sounds like the real world. The world adults have to deal with.

Yes, Chihiro’s a kid. She’s used to a world in which her rights and privileges are determined by her parents, who are obligated to keep her healthy and happy. She enjoys this status by virtue of being born. But in the wider world—and this is what makes it so scary—one creates one’s own identity. For the middle-class, anyway, one has to earn one’s pride of place. At the bathhouse it’s the same. Who you were, when you were a kid, doesn’t count for zip.

You’re nobody unless you earn your keep. Yubaba the Witch, boss of the bathhouse, steals Chihiro’s name—here, at work, she’ll be ‘Sen’. Chihiro thinks of this as a new name, but we might compare to a title. I’m “Chris” to some of you, but “Mr. Edwards” to others; and even “Sir” to a few. It’s not so different. 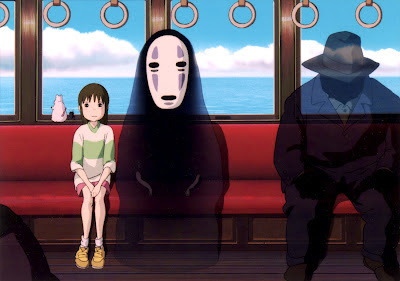 Miyazaki is clear-eyed about the march to adulthood—like Ozu, he focuses on its inevitability; something both joyous and tragic. We put aside childish things, yes; and take in the great big world; but in so doing, we risk being consumed. Haku, the young boy who greets, befriends and protects Chihiro when she arrives in the spirit world, has forgotten his original name. No-Face, a malevolent being that destroys or devours much around it, first appears socially awkward, shy and marginalized, which is how a lot of adults feel in the great big world. The fantastic Stink God-sequence—where Chihiro must bathe and cleanse an enormous walking pile of sludge and shit—which turns out to be a River God, choked with garbage and pollutants tossed in it by careless humans—is most instructive of all. Too much work, or the wrong kind, can poison us. That’s why we need spas and kids don’t. 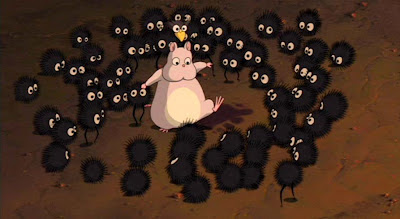 Spirited Away is funny, by the way. Miyazaki gets a lot of mileage from a guinea pig (actually, a transformed giant baby), a tiny bird, and swarms of living bits of dirt, similar to the ‘soot sprites’ in his 1988 film, My Neighbor Totoro. Their best moments aren’t self-contained comic scenes, meant to break the drama, but walk-ons—funny little things happening during typical or grave situations. Life is such a mix of things.

And Spirited Away is such a splendid mix of bits of life. In visiting a place none of us have ever been to, Chihiro treads the most familiar of paths. You see it, you see her, and you see yourself. 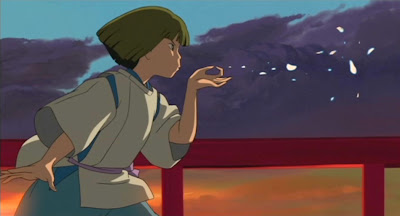 Where to find Spirited Away:
Spirited Away (Sen to Chihiro no Kamikakushi) screens March 25th, April 1st, and April 7th, in its original form, with English subtitles, at Toronto’s TIFF Bell Lightbox. It will be part of TIFF’s 15-film retrospective, Spirited Away: The Films of Studio Ghibli, featuring a collection of newly-struck 35mm prints and rarely seen titles.
Posted by Chris Edwards at 12:31 PM