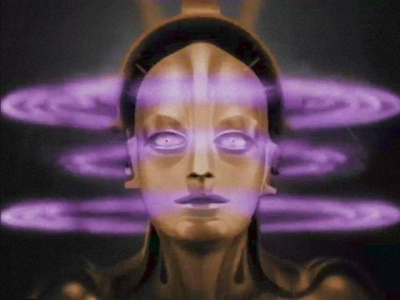 First things first: the Maria Robot is not gold, she’s silver. I know this. I’ve seen her that way for years, onscreen and in my head.

Indulge me a moment’s reflection. In 19XX, when I was a boy of fifteen, I saw Metropolis for the first time. I don’t know what version I saw, but I do know it wasn’t Giorgio Moroder’s, because it wasn’t in color, and Pat Benatar was nowhere to be heard.

I saw the movie alone, late at night, on TV. The French channel. The intertitles were subtitled into French, which didn’t matter at all, of course. I was hooked. This blog is a product of that night.

I wanted to see the movie again, immediately. I mountainbiked up the road to my town’s local Blockbuster Video (RIP), found the store manager, and informed him of the VHS tape I wished to order: specifically, whatever tape had Metropolis on it. No Internet, folks. The only way to learn was to ask.

“Which Metropolis?” the guy asked. Which? “The one that was on TV last night—on the French channel,” I explained. He hadn’t seen it. “Was it in color?” he asked me. No. “There’s a colorized one,” he said. “And the soundtrack’s by Queen.”

That sounded weird to me. It certainly wasn’t what I’d seen the night before, and given that mail-order, with its minimum-six-week delivery time, was the only way to get a silent movie of any kind in Lindsay, Ontario, in 19XX, I wasn’t prepared to take a risk. Besides, it seemed like bad form to watch what was—probably—a mangling of the original film before seeing the original. I did order the original, and something like nine weeks later, it arrived. I still have that tape. 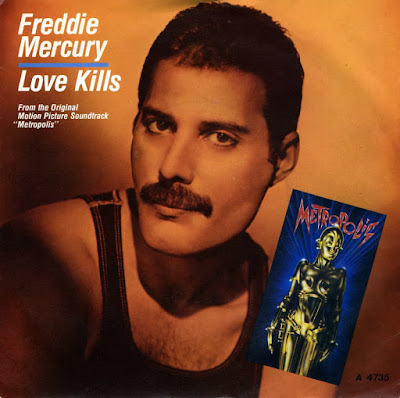 That video store manager was the first person to alert me to the existence of the Moroder Version, though he didn’t describe it right. Queen didn’t do the soundtrack—Freddy Mercury’s song, “Love Kills,” is simply part of it, along with Benatar’s “Here’s My Heart,” Adam Ant’s “What’s Going On,” and lots of electronica composed by Moroder himself. And Moroder did a lot more than add color to Fritz Lang’s 1927 film. He also compiled bits of footage from copies spread around the world, fusing them together for the first time in decades.

Yet, at 82 minutes, the Moroder Version is still notably fleet. It is short not just because some things were left out, but because Moroder sped other things up, added fades in a few spots, and replaced the intertitles with subtitles. A few scenes he also slowed, but overall, this Metropolis is faster and more hectic than others I’ve seen, even by the standards of its spastic leads, Brigitte Helm (Maria) and Gustav Fröhlich (Freder).

Is there any point in rehashing the plot? If you’ve read this far, you’ve seen Metropolis. On the off-chance you haven’t, I direct you to my review of the fully-restored Metropolis, which debuted only last year, and, at about 148 minutes, feels positively gargantuan compared to the Moroder Version. They are different films, in more ways than one. 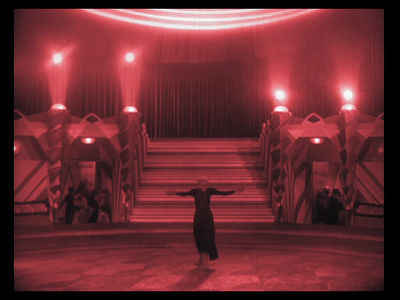 The Moroder Version omits nothing you remember from Metropolis—I mean really remember. Meaning the big scenes, the ones you never forgot, even after your first viewing: the clock; the flood; the robot’s handshake; the Moloch explosion; the Story of Babel. It’s all there, in its own way.

But now, the electrodes in Rotwang’s lab buzz hot with white light. The signs in the seedy Yoshiwara District, which we always imagined glowing neon, now do. Sepia tints establish the Robot is gold—or not silver, at least. Jarring, all of it, but not necessarily bad.

Maybe the music’s the issue? For something must be. For the Moroder Version has been, since it debuted, a film many silent film fans loathe. Some of the bile can be explained away by stuffiness—a resistance to any tinkering with a classic—but some of those fans I know, and they’re smart, open-minded types. Yes, I blame the music. It is the big problem for me, too.

I have a theory about silent film accompaniment, which I touched on here. It goes beyond the “must be sympathetic to the film” stance, though I do agree with that, unless the purpose of the presentation to create cacophony, in which case, the music and image ought to clash. This is legitimate, insofar as the film is seen as an element of another artwork, rather than an artwork itself, in need of supporting music. In such cases, we’re watching (and listening to) a piece of artwork that includes silent film imagery, rather than a silent film.

Anyway, the theory states that the brains in a silent film audience are very busy ones—in a constant state of reconciliation. They are reconciling image to tune—something much harder than reconciling image to sound-effect, as they might have to do in a talkie… when, for example, they see a dog bark and hear the sound of barking in perfect synchronicity. In a silent film, usually, there is no attempt by the musicians, even if prerecorded, to mimic the sound effects that would be caused by a thing on-screen. So, the image of the barking dog would not be accompanied with a bark-like sound, timed on cue with the opening of the dog’s mouth. There are certainly exceptions to this, but not many.

The result is that silent films require intense concentration. This is why some people dislike them. It is also why a good one can so totally captivate its viewers—those viewers have put more into it than they ever have a talkie. This creates a sense of ownership. Through this constant reconciliation, we sort of “make” the silents we watch—we construct them from images and melodies not inextricably linked. They belong to us a little.

And the Moroder Version, at times, steals Metropolis away. 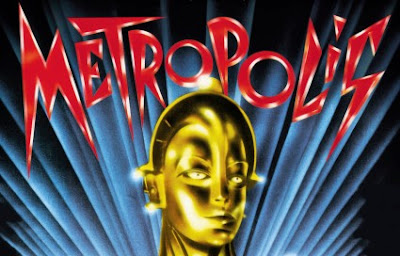 It doesn’t do this in scenes backed with Moroder’s own music, which is all instrumental. In those scenes, the music is sympathetic enough to make reconciliation possible; in fact, Moroder’s electronic beats suit the film well—at least this version, with its breakneck pacing. But the rock songs, blaring their lyrics over what we see, become troublesome.

I have no opinion on the songs as songs. I only care about how they impact this particular piece of art. And their effect, to me, was mostly obnoxious. The problem with lyrics is that they’re words; they’re specific; they describe a particular thing and, should an image accompanying them not match that description, it falls into contrary relief. It ends up supporting the lyrics, rather than the music supporting the image.

Thus, a music video is born. The music video is silent film’s close cousin, with the emphasis reversed. Music videos can be wonderful art (I even reviewed one once, right here), but transitioning from one form to the other in the same film is frustrating. We connect with Metropolis, assemble its sounds and images, piece together something striking, and then, bang! There’s a voice from outside, telling us what we’re seeing. Locking us down. It isn’t fun.

Though it is, occasionally, funny. Like the sequence, late in the film, where the rioting workers charge the machines. “You say the situation’s/getting out of hand!” sings Loverboy. Well, no shit. Or my favorite: “How does it feel to lose control?/Feels like Hell./So who’s a friend and who’s a foe?/Can we tell?”—sung over the image of Jon Fredersen and Rotwang, descending into the catacombs to spy on Maria’s sermon to the workers. Too. too blunt. I was reminded me of a joke from The Simpsons, where Homer loses Maggie, phones a hotline for missing children, gets put on hold, and hears “baby come back.” If I thought Moroder was going for humor, this wouldn’t be a criticism.

(However, the “Hell” pun is pretty clever, on its own). 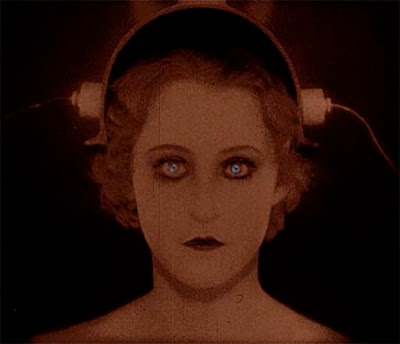 I don’t want to end this review with complaints. There were moments I really enjoyed in the Moroder Version, particularly anything that shook up my now-venerable mental image of what Metropolis is. The electric blue eyes of the Maria Robot made her far more menacing, for instance; as did the metallic note Moroder played every time the unaltered Robot took a step. Moroder’s decision to add traffic sounds to an early scene of, well, traffic, is surprisingly compelling—changing the effect from one of awe at the scale of the buildings, to one of everyday life in an urban environment. There’s nothing wrong with this.

And replacing intertitles with subtitles... why didn’t more silent-era directors try that? Intertitles were a necessity, up to a point, but also an aesthetic choice; they break the action, for good or ill, whenever they appear. When Grot the Foreman screams to the rioters: “Listen, fools, if you demolish the machines then you will flood your own homes!” your eyes never leave his trembling body, and his mix of panic and rage feels forceful and immediate; more so than I recall from other versions. There’s nothing wrong with this either.

Giorgio Moroder claims to love Metropolis, and I take him at his word. His restoration, pulling together disparate elements of the film held in different countries, took three years—proof, I think, that he was committed to making something great. He didn’t, quite. But his failure isn’t tasteless, or crass, and it certainly isn’t blasphemous. It boils down to a simple lack of faith. Moroder wanted to make Metropolis “modern”, and I don’t believe he trusted Lang’s imagery to connect with people any more. In fact, it still can. And the irony is that the Moroder Version, almost impossible to find for years and years, has now been re-released after the fully restored Metropolis. The Moroder Version is the artifact. And it is the Moroder Version, after almost 30 years, that we must struggle to comprehend.

Where to find the Moroder Version of Metropolis:
Kino International’s new Blu-ray release of the Moroder Version includes trailers and a brief documentary (more like a featurette, really) called The Fading Image, which describes Moroder’s restoration process. A second, newer doc, considering the wisdom of, and controversy surrounding, the Moroder Version, would have been welcome.
Posted by Chris Edwards at 3:06 PM