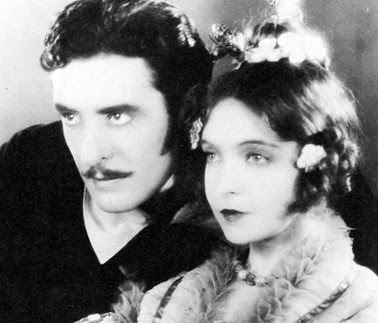 I have a love for Lillian Gish’s work so strong that it approaches prejudice. She’s my favorite actor, and the promise of seeing one of her performances is enough to make me watch anything she’s in. But, when I do, I often find the actors around her, the sets—the whole movie, even—blurring into the background. Gish did not work in a vacuum, but sometimes, that’s how I remember it. Not with La Bohème. It's not the best film Gish ever starred in, but the rest of its cast, and its director, were as game as she was.

King Vidor, whose interest in poor and hopeless souls reached an apocalyptic peak with The Crowd (1928), here delivers something intermittently light. John Gilbert is perfectly cast as Rodolphe, a playwright who has barely a franc to his name, and seems exhilarated by that fact. Gilbert, an actor with real charm, seems almost balletic in his big scenes: standing well-poised and straight; his form tapering to a thin waist; his footsteps light. He is Carelessness.

Gish, as Mimi, is Concern. She’s an embroiderer: poor like Rodolphe, but worried about it. This is a typical Gish role, in the sense that she plays a woman who suffers greatly, but persists, thanks to the strong spirit inhabiting her weak body. 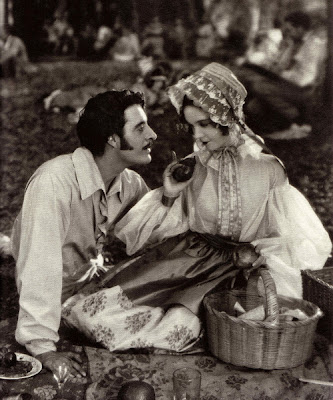 Oh, the things she does. I’ll describe just two. First, there's Mimi’s trip to the pawn shop, where she spills a bundle of goods on the proprietor’s table—an amazing piece of pantomime, as Gish manages to attach a split-second’s worth of meaning to each object as the man casually flicks them aside. The pace of this bit makes it comic, but the intensity—and range—of different reactions Gish delivers, using her eyes and mouth, shoulders, arms and hands, makes it moving, too.

The second example, also ostensibly comic, occurs soon after Mimi and Rodolphe meet. Mimi arrives at her neighbour’s apartment badly chilled, and so he offers to let her warm herself by his stove-pipe. There’s a fairly obvious joke here (one Vidor intended, I think, since he gives a lot of screen time to a packing tube and loaf of French bread later on); but that’s not the point of the scene.

The point is to sexualize Mimi without compromising her character. Even covered neck to foot, wearing a shawl, she must envelop the stove pipe to get all of its heat, and then, turn around to warm her rear. And when she does that, arching her back and turning up her face, there’s something a little Garbo-esque about Mimi.

This is all great silent acting, of course. But what’s more interesting to me is that both scenes have a 'beat' to them. In the first, Gish is composing with short notes; in the second, with long draws of the bowstring. They were adapting opera here, after all. The music has to come out somehow. Combine these scenes with the totality of Gilbert’s performance and you see how Vidor proposed to do it.

Other elements, though, feel stagey. The bohemians’ living space is gigantic, or at least it looks that way, as if theatrical width were needed for a film with no dance numbers or otherwise complex choreography. Rodolphe’s friends are painted a bit too broad for a film from the mid-20s. And the costumes, especially for the women, are outsized and garish. They look wrong on Gish. 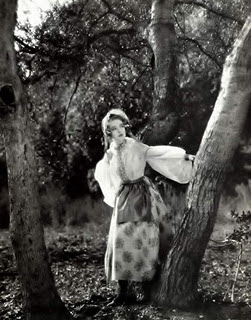 Actually, joy looks wrong on Gish. And maybe that’s why, as La Bohème wore on, I began to care less about Mimi. If you know the plot of the opera, you know that joy, for her, is fleeting, but there is a point, about in the middle, where she has a lot of it. Gish gives us that joy. But her swooning over Gilbert comes off as cheap. A cynic would say she had no gift for light comedy. Being prejudiced, I prefer to think of Gish as having created a character too full, too nuanced in her fears and goals, to be as air-headed as the rest. Maybe I should believe in the power of love instead. But frankly, I couldn’t believe that Mimi believed in love.

Though Mimi is pursued by a drooling Viscount, who manipulates his opera glasses like a probe, she remains above reproach—a more virginal character than I understand her operatic counterpart to have been. The sexual politics thus simplified, the film can only concern itself with whether Rodolphe and Mimi will find happiness; which, in a film like this, really boils down to whether or not Mimi will die. I haven’t seen Gish die very often, but, it should be noted, she can collapse like nobody’s business.

***Can't get enough King Vidor? No, of course you can't. Read my posts on The Crowd and his super-rare 1920 film, The Jack-Knife Man.
Posted by Chris Edwards at 9:58 PM