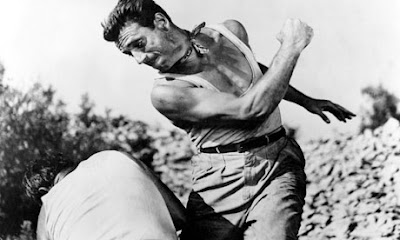 I’d never seen The Wages of Fear, but I knew what it was about: men driving trucks, carrying nitroglycerin.

I expected tense moments. Tires hitting bumps; hands clenching steering wheels; crosscuts to plastic containers of explosive fluid, jostling in the beds. It would be impossible, in the hands of a director as talented as Henri-Georges Clouzot, for this not to be a nail-biter.

The Wages of Fear delivers on that, often enough. And like all really good suspense stories, it goes further, giving us four drivers (two per truck) whose tales interweave prior to the trip. You may not exactly care if these men live or die, but they are all fascinating in their ways.

But before discussing all that, I have to bring up the sky. It’s what I remember most about The Wages of Fear; what I noticed immediately, when Clouzot introduces us to the busted up, dusty little South American town where the men live. The sky’s cloudless and vast. Bleak. Almost—blank.

This film is shot in black and white. An empty sky, in such a film, can appear like a screen without a signal; and the objects and figures beneath it, displaced—pasted on, as though they’re not really there. It’s like this early in The Wages of Fear. And the men are nowhere—underemployed Americans, Frenchmen, Germans and Italians, their chatter a mash of languages—arrived to work for the oil wells in some fashion, but unable to get good work. Just hanging around in a hopeless town, where nothing changes and no one earns enough dough to fly home.

Mario (Yves Montand) is a Corsican; he’s unfocused and maybe a bit lazy, like most of the men in the town, but he has more spirit. He’s also younger, taller and more handsome than the rest, meaning he doesn’t have to work hard for the attention of Linda (Vera Clouzot), the prettiest girl around. Maybe if sex with Linda was harder to achieve—or really, if there was anything else to strive for—Mario would be happy. His best friend, the sunnier Luigi (Folco Lulli), has been told he’s got a lungful of concrete dust. Both of them would love to move on.

Things speed up a little with the appearance of Mr. Jo (Charles Vanel). Mr. Jo is a Frenchman too; he arrives having built some sort of reputation, somewhere—he cleaves quickly to Mario and disdains the rest. 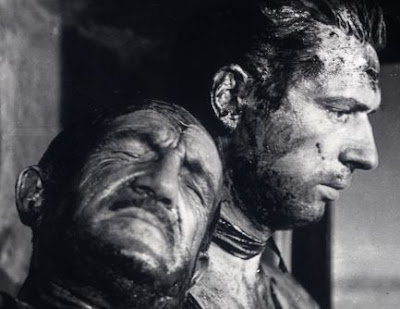 It is clear that Mr. Jo presented a threat, at least in his youth. He knows how to control people; showing steel early on in a showdown with Luigi and a pistol. He’s also on a first-name basis with Bill O’Brien, the Patton-like chief of operations at SOC, an American oil company, whose well, some 300 miles away, just exploded. But Mr. Jo, like Mario, Luigi, the brooding Bimba (Peter van Eyck) and the rest of the townsmen, needs money desperately. So desperately that he joins the other three on a mad-person’s quest: transporting nitroglycerin to SOC’s burning well, hundreds of miles away, in two trucks that are not properly fitted for the task. One wrong move—one pothole, one rock, one slip—and they’re all vapor.

The volatility of the mens’ cargo, and the paucity of their tools, makes death a constant, intimate possibility. And the tension’s further heightened, because the film’s first hour, spent in the town, erases much of the ‘safe time’ we, as the audience, counted upon. One assumes that none of the main characters will be killed in Hour One. But they begin their journey in Hour Two.

Many great moments follow. Most memorable are scenes involving a rickety wooden bridge, on which the huge trucks must make an unplanned three-point turn; and much later, a pool of oil that covers the men in grease and filth: seemingly a comment on what they’ve reduced themselves to.

On its surface, The Wages of Fear is about men, capable in other fields, who must now face an environment where nothing is possible if one is afraid. Not everyone shines. Mr. Jo’s air of menace evaporates when he’s faced with his own mortality, and the once-subordinate Mario must take command. Jo weighs the risks, and so he’s paralyzed; Mario, unwilling or unable to absorb the danger, comes alive. 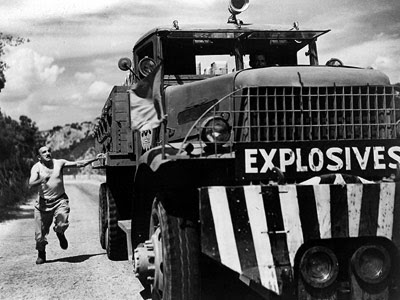 But the film is just as much about nihilism. Not an essay on it, so much as an apprehension of it. The men have their little dreams about pretty girls, fine French tobacco or simply getting the hell out of town, but they don’t spend much time thinking about why they’re in the town, or even if they should be. Mario and Mr. Jo are outright amoral beings. Bimba has a personal code that doesn’t quite equate to right and wrong. Luigi, a man who states he will not kill, seems to adhere to higher ideals, but he’s also the most frivolous.

Neither is the world around them moral. Their town is full of louts who claim to want work, but probably don’t want much of it. And SOC, the source of their cash, is frighteningly indifferent to death. O’Brien is a loud, demented Libertarian who believes he’s justified in sending men on suicide missions so long as they know the risks and SOC pays the survivors as promised. Clouzot’s image of men standing before the oil well—still a raging inferno—is less a symbol of Hell than of a furnace, into which all their efforts, courage, and pointless paper money will be cast.

If there is no good life, then a life cannot exactly be wasted. Perhaps then, it’s pointless to dream about a long life, or to wish you had more time. (Mr. Jo, for example, may have lived too long.) I cannot tell you exactly how long it took the men to make their 300-mile drive. Sometimes their trucks crawl—other times they race. No one seems to sleep. I also don’t know how long Mario and Mr. Jo spent in the town beforehand—the days blur together. Clouzot portrays one of their conversations by cutting from one location to the next. Each time a man answers, the two of them are somewhere else. Perhaps they had this conversation over weeks, or simply talked about the same thing, always. 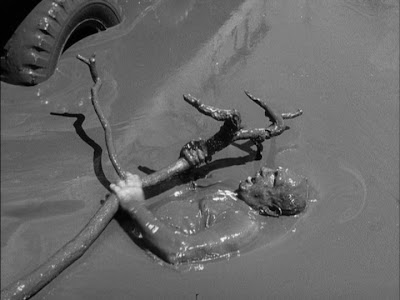 Overhead, the sky gives nothing. No change of season, almost no gradation—just white and black. That, and the occasional plane, too expensive to board. Offering tickets, if one could afford it, to Anywhere But Here. When you watch the film’s final scene, ask yourself if it even matters.

The Wages of Fear is also available on DVD and Blu-ray as part of The Criterion Collection.

A tip: If you like The Wages of Fear, try watching Night of the Living Dead (1968). The films are totally unalike in setting, story, and genre, but philosophically, they share a lot.

And by the way, if Shigeru Miyamoto or Takashi Tezuka are fans of The Wages of Fear, I’m unaware of it.
Posted by Chris Edwards at 7:13 PM