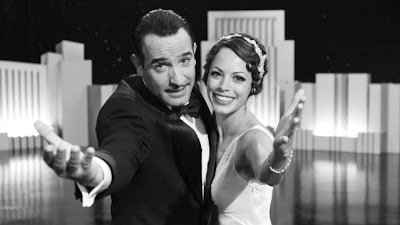 Jean Dujardin makes a great Douglas Fairbanks, with his slicked-back hair and pencil mustache and swagger. He plays a silent star about to face the onslaught of Sound--a showdown that will cost the star his career. Dujardin isn't Fairbanks, though; he's George Valentin: a man who never was, but could have been, and represents many who were.

Aside from one archival clip, Fairbanks doesn’t appear in The Artist; he's not even mentioned in passing. Neither are Clara Bow, Greta Garbo or Norma Shearer, the three women I believe were sampled to make Peppy Miller (Bérénice Bejo), Valentin’s love interest. The Artist does not recreate the time in which it is set, so much as create the look and feel of a movie from that time. And kudos to director Michel Hazanavicius for taking this to its logical—and bold—extreme: a 100-minute, modern silent film.
It really is silent. Really. This is not a film without words, like the first half of WALL-E. In The Artist, we see dialogue spoken but cannot hear it, as opposed to simply watching actors say nothing at all. The soundtrack, with rare exceptions, is only music. Its first half-hour is sharp, tight, silent-style romantic comedy, as good as anything produced in the '20s  The Artist is the real thing.
George is a man too full of life, and too adored, to see tragedy coming. He extends his gravitational pull even to us, filling the screen with his grinning self and throwing open his arms as if to lock them around the movie audience. Only his wife, the aging Doris (Penelope Ann Miller), seems immune. She sits in plush chairs, in their mansion, and blacks out his teeth in fan magazines. 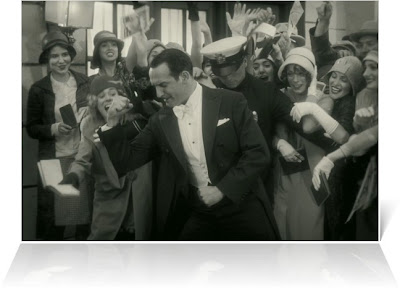 You can see why George is a star. You root for him. You meet Peppy and root for her too. You follow their lives, as Act One advances them to the points they must occupy for George’s gargantuan fall. To do this, Hazanavicius employs a series of repeating gags (or gag structures) familiar to fans of silent comedy: A succession of playbills, for example, building Peppy’s career from chorus girl to lead; or George and Doris’ succession of dinners—with the mood growing ever colder and Doris’ neckline climbing ever higher—referencing Citizen Kane, perhaps, but with a farcical tone Kane never had. Through it all, you feel the energy of the Jazz Age. The exhilaration, the tipsy nods to tragedy; the amplification of experience.
It's in Act One that you'll find The Artist's best scene. Already in the movies but not yet a star, smitten Peppy sneaks into George's dressing room. He's not there, but she does find his suit coat, hanging on the wall. She stands in profile before the coat, and Hazanavicius films her embracing it with her left arm, while threading her right arm through its sleeve, so it appears to embrace her back. What an incredible thing this is—erotic, funny, and honestly, urgently loving. You won’t see one movie in a hundred that nails a scene like that. But The Artist isn’t always so precise.
Act Two begins with another remarkable scene, just after George and his hardnosed studio head (John Goodman) have finished laughing at some actor’s first sound test. George returns to his dressing room, smug. Sound is a joke. Nothing for him to worry about. He takes a drink, and his glass hits the table with a clunk.
He hears that clunk. So do we. All of a sudden, all around George, are sounds. Breathing, traffic, starlets’ shrill laughter, growing, growing—a phone ringing, his dog barking—he cries out against it, still without words, feeling--sounding!--impotent in this lewd, loud, bonkers new world. George’s soundtrack panic attack (what else would you call it?) creates a sudden emotional turn that couldn’t be achieved through dialogue or action alone. 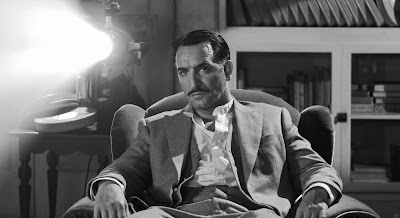 Now the movie goes grim. George’s films fail. His marriage ends. He hits the bottle. He sells his stuff. He releases his butler (the always sturdy James Cromwell), who would’ve gladly worked for free until one of them died. We get the point, but again and again the movie makes it, until The Artist begins to drag. George gave us so much energy, right off the bat, that it is our own joy we miss, not his. This isn’t the same as sympathy.
The Artist has an obvious structure—it is, after all, a movie about movies like itself—and so we watch for the end point, then become impatient when it remains so far away for seemingly no good reason. Meanwhile, there's Peppy, the It-Girl with the cute face and the heart of gold: unsullied by fame; her long limbs pulsing with the exuberance of the Sound Era, giving us no villainy to be slain, and barely any hubris to deflate. It is her time. She deserves her fame and we aren’t able to invest in her downfall, or even the possibility of it, to keep things interesting.
Maybe this is why, toward the very end, we’re given an intertitle “Bang!” joke that is, frankly, in poor taste. It takes something like this to free us from our listless state, challenging our presumption to know what’s coming. However, we were right to presume. Like Peppy, we see things for what they are. 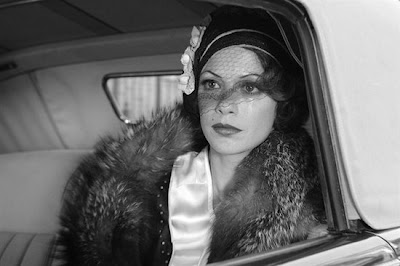 I liked The Artist well enough. Occasionally I loved it. What interests me more than the film, though, is where it could lead. The next step (and I hope there is a next step) is a silent feature that isn’t about its own silence, or the Death of the Silent Era, but simply about something else. Anything else. Even something mundane: made magical and new through the silent techniques Hazanavicius has so thoroughly mastered. I do believe we deserve it.
Where to find The Artist:
I attended the second screening of The Artist at Toronto’s TIFF Bell Lightbox; part of the 2011 Toronto International Film Festival. In attendance for a Q&A after the screening were Hazanavicius, Dujardin and Cromwell, all of whom were gracious with the rather limited time we had for questions. Of particular interest: Hazanavicius told us he played music while the actors performed their scenes—something common in the Silent Era but now long gone. Cromwell spoke warmly of that experience, calling The Artist “the sweetest set” he’d ever been on.
Posted by Chris Edwards at 8:30 AM