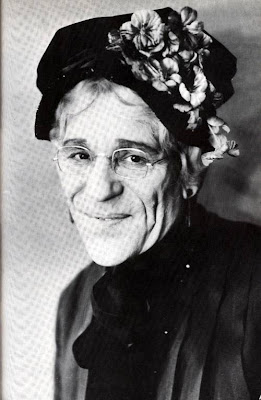 I’ve seen Lon Chaney look plenty ugly on the silent screen: a Hunchback, a Phantom, a ghoulish take on Dickens’ Fagin—and by that standard, his cross-dressing turn in The Unholy Three doesn’t even rate. It occurred to me, as I watched him play the role of a ventriloquist playing the role of a jewel-thief disguised as a grandmother, that Chaney’s face seemed rather appealing. Not lovely or anything, just believably, warmly, grandmotherly. Maybe there’s a point in that: for all the accolades I’ve read of Chaney and his ‘thousand faces,’ I don’t remember it ever being called warm. There’s femininity in those lines and creases, I think. See if you can find it.

Tod Browning’s The Unholy Three, in which Chaney stars as sideshow performer Professor Echo, is not the actor’s most memorable part, nor is it the director’s most memorable movie (Browning directed both Dracula and Freaks a few years later, and Freaks, in particular, is a film you can’t review so much as recount). It is, however, light entertainment, and that’s precisely what it’s trying to be, so it is good. I believe that if you described the plot of this film to someone else, they’d sit down next to you and watch it.

The ‘unholy three’ are a criminal gang—and actually there’s four of them, or even five, if you count the giant chimpanzee. They are: Professor Echo (Chaney), who performs to full rooms (though maybe the rooms are small), selling joke books when his shows are through; Hercules (Victor McLaglen), a strongman who bends horseshoes; Tweedledee (Harry Earles), an ill-tempered little person; and Rosie (Mae Busch) an exotic dancer and pickpocket loved by the Professor. These four collude on a scheme to rob the rich, using their unique skills both to achieve the crimes and, I suppose, to evade suspicion—in fact the scheme is so outlandish that no lawman would dream of it anyway.

The crooks buy a birdshop. Echo poses as ‘Granny O’Grady’, the owner; Rosie, her granddaughter; Tweedledee, an infant in her care; Hercules appears to be the hired help, but I’m not sure. The shop specializes in expensive parrots, which, apparently, are mute. When Echo sells a parrot to a wealthy customer, he throws his own voice so it seems to come from the bird. When the patron takes the bird home, it will appear to cease talking. The purchaser then calls the store; Granny takes the call, suggests that the bird needs one more visit from her to acclimate to its surroundings; brings the ‘baby’ with her when she comes, and Tweedledee cases the joint. 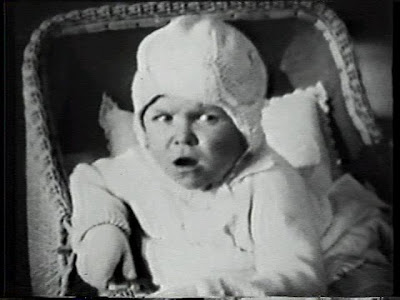 Browning et al are well aware of how silly this is. There’s a lot of laughs in The Unholy Three, mostly courtesy Tweedledee, who chomps on cigars and swears like a thug even while wearing his bonnet ("If you tip that boob off to who we are, I'll lay some lilies under your chin.") Think Baby Herman from Who Framed Roger Rabbit?—in fact, I’d be surprised if Tweedledee didn't inspire that bit. Matt Moore provides a few more laughs as Hector Macdonald, a store clerk hired to provide a legitimate face for the operation, and, if need be, a scapegoat, since he suspects nothing. Hector also longs for Rosie, but he’s as much a tool of the plot as anything else—the film’s emotional weight is carried entirely by Chaney and Busch, who play a pair of people who aren’t that bad, really.

I enjoyed The Unholy Three. It’s a quick-moving film with a sense of humour, and the jokes are made with an awareness that the movie is just one big joke itself. My take may differ from yours though, because I saw The Unholy Three in a way you likely won’t: in total silence.

Well, not total. There were sounds drifting in through an open window in our apartment. We live near a ball diamond and it’s summertime. But the disc itself had no score, nor even sound effects. It was a review copy, provided to me in advance of a screening of The Unholy Three scheduled for next week here in Toronto. That screening will feature live accompaniment, and so the print I watched was accompanied by nothing, unless you counted the baseball game. 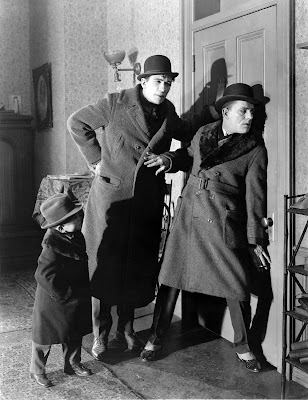 Watching silents in silence is not something I usually recommend. It can be smothering, particularly if the film has relatively long shot lengths, a lot of medium shots and minimal camera movement, as many silents do. You couldn’t pay me to watch The Cabinet of Dr. Caligari this way. Dead silence is also challenging in a public environment—for reasons I've detailed before.

In your own home, though, on your own time, it can be a rewarding experience. In this case, I found myself imagining more of the dialogue than usual. Sound effects, too, seemed to come from within: I remember the sound of Tweedledee pounding on a toy drum beneath Granny O’Grady’s Christmas tree, though in fact there was no such sound, not even an accompanist’s conveyance of chaos—only the visual of the little man doing it. I bet, in a few years, I’ll forget that I saw the film in silence at all, and recall a drumming sound that never was. 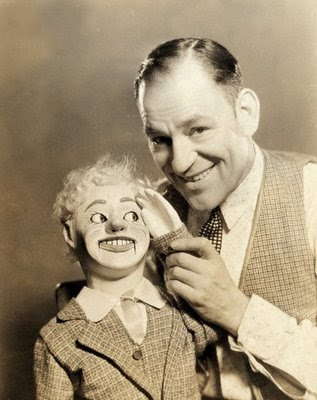 Watching The Unholy Three this way reminds me of the rich potential every silent film possesses. There is not one viewing experience, but near infinite possibilities—as many interpretations as there are interpreters, and those interpreters are not just audience members, but musicians as well. I see what I see, but I hear what they see—will the result be enlightenment? Dissonance? Both? This Saturday, TIFF Bell Lightbox will screen The Unholy Three with live accompaniment by pianist Laura Silberberg. How will she approach the drumming scene? Will she reproduce the sound on her keyboard? Will she, instead, evoke the unease each character feels in the scene, which is a tense one? Perhaps she’ll let it run silent. That could be effective too. The choice is hers.

Where to find The Unholy Three:
An archival print of The Unholy Three screens on June 25th, 2011, at TIFF Bell Lightbox—part of The New Auteurs: João Pedro Rodrigues’ Outlaws of Desire. Rodrigues will be in attendance, along with João Rui Guerra da Mata. Live piano accompaniment will be provided by Laura Silberberg. You can read my review of Rodrigues’ To Die Like A Man (2009) here.
Posted by Chris Edwards at 9:03 PM