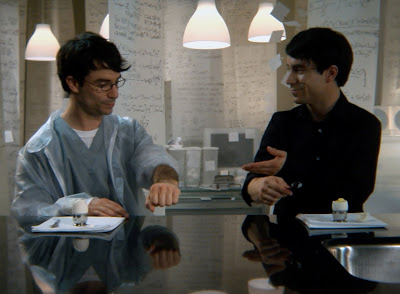 I write about silent movies for many reasons. One is the opportunity it gives me to watch, and think about, incredible short films. Some of the world’s finest short comedies were made in the 1920s (you can guess the names behind them); in the 1910s, a crop of remarkable fixed-camera fantasies and dramas mixed old theatrical and new cinematic techniques in intriguing ways.

Go back even further and you’ll see films that are short because they had to be. Those that survive often seem silly, primitive, and very fast, and of course they’re very brief—but whatever their technical limitations, they were state of the art. A 10-minute film, in 1902, wasn’t a ‘short’; it was just a movie. Maybe it was screened with a dozen other movies in a tent somewhere, and maybe it wasn’t considered high art by the standards of stagecraft, but that’s was cinema at the time. And so figures like Georges Méliès, Alice Guy, Segundo de Chomón, Edwin S. Porter and J. Searle Dawley poured feature-worthy energies into films well under 30 minutes’ long. Bold work resulted. Or dreck, but that’s art.

That’s my Silent Volume lead-in to a post not about silent film. This week I was invited to a screening, at TIFF Bell Lightbox, of Packaged Goods, a selection of international short films, music videos and TV spots produced by commercial directors. Programmed by Rae Ann Fera, former editor of Boards Magazine, it begins with a selection of films conceived for the Cíclope International Advertising Craft Festival, and ends with several pieces from Skin Flicks, a music video production house founded by Richard Skinner and John Hassay. Total running time is 70 minutes, covering 24 pieces.

There are a few duds in the bunch. Not duds because they’re poorly made, but because the inspiration isn’t quite there. For example, it isn’t enough, for me, to show digitally cloned images of the same beautiful dancer in slow-mo, choreographed self-embrace, then just fade to black. This piece, a Dolce & Gabbana ad, works well enough as a commercial, simply because I still remember it. But it doesn’t intrigue. Better by far is Jonathan Gurvit’s “Hair Conditioner” spot, which gives us the funny, bizarre image of a bald man conquering the open road in a muscle car covered with hair. Wind whips through the car’s hair the way it would the man’s, if he had any. He’s enraptured. They are one. Part shampoo commercial, part car ad, the spot’s actually shilling a bank (‘Very personal loans’). Dali would have been a customer.

The music videos, too, left me cold, with a couple of exceptions: James Sharpe’s “Cauliflower” and The General Assembly’s “Through the Night.” The former is about fixation, both figuratively and literally, roping a young couple together at the waist as they navigate the streets of a European city. Sheppard’s rapid cutting gives the video a nervous feel, darkening the meaning of its refrain: “You hold me close, you hold me near./You are the one for me.” By the time a man in black hands the boy a pair of scissors, you wonder what he’ll do with them. 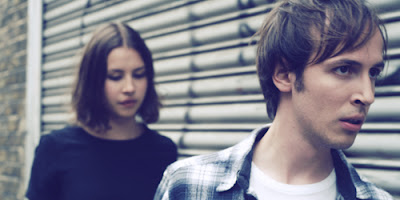 “Through the Night” is a spoof of 1970s buddy cop films, with a homoerotic twist. I liked how this one played with boundaries of genre and form—the editing (and the mullets) tell us not to take things seriously, but the feelings the men hold for one another are real. What both these music videos have, that the rest don’t, is a power generated equally by music and by narrative, even tilting in favour of the story. That I preferred might be my film geek bias at work, but I maintain that a music video’s more interesting when its images bring a new angle to the song, rather than simply evoking it.

You’ll like the short films best, I bet. Several stand out in Packaged Goods, the opener most of all: Dean Fleischer-Camp’s Marcel the Shell With Shoes On. A stop-motion short, its title captures precisely what Marcel is: earnest and without pretension; a tiny being hoping only to explain to you how he lives life as a shell with one eye and no arms. “Guess what I do for adventure,” he says. “I hang-glide on a Dorrito.” This is not delivered as a punchline, simply fact. Marcel could easily have been grotesque, but instead he’s sweet, and so is the film. 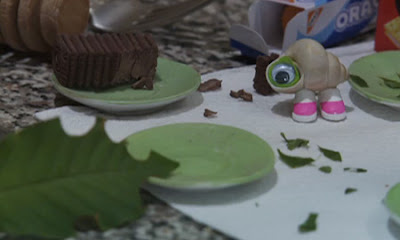 Grotesque and then some is Kris Hoffman’s Breakfast, another stop-motion short. Breakfast uses a set of interlocking wooden blocks to tell the story of a chicken, cow and pig on a farm. Placed together, the blocks form a traditional pastoral scene, but as the narrator reveals each animal’s fate, the blocks shuffle to depict new images of life on a modern industrial farm—the type that makes the middle for your McBurger. The animals suffer horribly. Breakfast is the programme’s most chilling piece.

Also disturbing, but funnier, is Hirsute, directed by A.J. Bond. Hirsute is about a lonely young man who papers his walls and floor with sticky notes bearing bits of a time-travel equation. One morning, his future self appears in the bathtub. The interplay between the two is gold, as the future man has the benefit of hindsight, and the confidence of success, and has grown smug and fake from both. Hirsute could easily be a feature-length film if its themes were explored in more depth.

One more: Bevan Walsh’s Love Does Grow on Trees; a coming-of-age story about a British ’tween who discovers his first scrap of pornography lodged in a soccer net he’s minding. Transfixed, he’s immediately clobbered by the ball. Walsh sets his film in ‘a simpler time,’ before the Internet made such finds too easy to be hormonal game-changers. His hero has exactly the mix of lust, fear, and guilt I had at that age, and the film neither judges him, nor entirely lets him off the hook. The nightmare sequence, where he shyly talks milkshakes with a pretty girl before being pelted with a storm of porn pics, is priceless; a truth-to-power moment if I ever saw one.

Where to find Packaged Goods:
The first installment of the Packaged Goods series runs Wednesday, May 11, 7 p.m., at Toronto’s TIFF Bell Lightbox. On May 11, A.J. Bond and Scott Mackenzie, executive producer of Toronto-based commercial production house Radke, will appear as special guests.
Posted by Chris Edwards at 4:12 PM