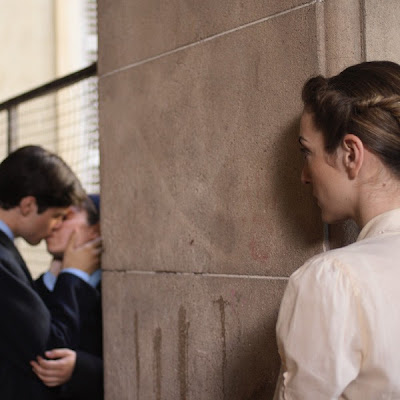 We don’t meet Marita. Marita meets us. She marches a row of uniformed Argentine students through the halls of her school, toward you and me; stiff in her starched white blouse and black skirt, hair in a bun, face chalky and wiped of emotion. She inspects them. Failure is measured in inches: one student’s hair too short at the back; another’s fingers too far from his classmate’s shoulder in line. These are small things, but that’s the point. Enforcing conformity is Marita’s job.

Marita (Julieta Zylberberg) is a small thing herself; you notice it right away. The teenagers tower over her, even the girls; without her chunk-heels, she’d be under five feet. Her face is unlined. Director Diego Lerman could have credibly cast Zylberberg as one of the students; that’s how young she looks. But instead, she’s an authority figure, and that means everything to The Invisible Eye. 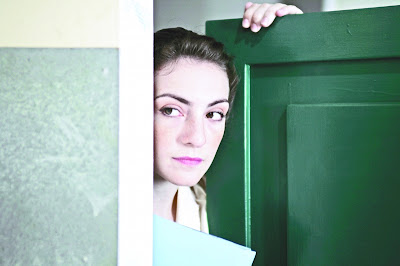 The film is set in 1982: heady times in Argentina. Six years of dictatorship is coming to an end, we’re told—‘crumbling,’ as Lerman puts it in his opening text. We read this, then we see the thickness and polish of the school’s marble exterior. The immensity and age of the place. It never seems full: teachers like Marita walk its corridors looking like rafts adrift in a great grey expanse. If revolution is afoot, this mausoleum will be last to feel it, and that is the educators’ goal.

“Subversion is like cancer,” head professor Biasutto tells Marita. He goes on to explain how cancer spreads. Biasutto (Osmar Núñez) is a patriot, at least currently; he was installed in the school after the coup and sees it as his job—all the teacher’s jobs—to kill the cancer where it’s fresh. He’s enormous before Marita, who fancies him as a man and fears him like a father. She doesn’t speak to her father. “Call me Carlos,” he says. 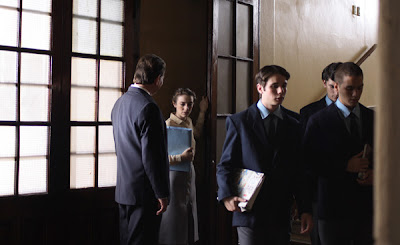 Biasutto exudes warmth, but he’s a horrible man. Marita, the disciplinarian at work, is like a teenager at home, a virgin living with her mother and grandmother; unable even to have a room of her own. These are people for whom professional exteriors disguise much. I suppose that’s part of being a professional, but it occurred to me that, for Marita, the rigidity was a replacement for strength, not an expression of it. Encouraged by Biasutto to spy on the students (‘The secret of good discipline is surveillance,’), she soon begins hiding in the boys’ lavatory, in one of the stalls, listening to them, and fantasizing.

Marita would be popular with men if she wasn’t so shy. Zylberberg captures the essence of this shyness: the self-loathing, the look of discomfort and irritation that pushes others away even as she longs for friendship. Invited to a party by her colleagues, Marita dresses up in high-80s style (the bulk of the perm on one side—you know), then spends hours in awkward conversation with people she ought to have lots in common with. “Are you having fun?” she asks another guest, blandly. No one asks that but the host.

Marita is nothing without the school system to confer authority upon her, and even that has its limits. Both of her objects of lust: Biasutto and the tallest of the schoolboys, regard her with benign contempt. Neither has the slightest respect for her skills, if indeed she has any. They smell her fear. Marita, in turn, uses her position not to dominate others, but to hollow out an even narrower fantasy space for herself. In one wretched moment she sneaks into the boys’ locker room during swim class. She begins rifling through a gym bag: pulls out a mix-tape and inspects it; pulls out a pair of underwear and smells it. She opens a bottle of perfume she recently bought and applies it, right there. It seemed to me that Marita was constructing a sexual encounter in her head: the music, the smells, the touch of intimate clothing, the sight of the half-naked boy in his swim trunks—all sensory components; everything but the real thing. 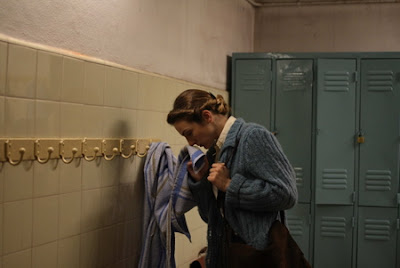 This is a terribly vulnerable woman, to whom worse things, we fear, are bound to happen. For the government, too, the worst is coming—The Invisible Eye builds dread as the end of the dictatorship approaches and Marita’s habits are exposed. She collapses in tears, like a child, before Biasutto. Then the pair of them, epitomes of moral rectitude within the school, hide together in the bathroom stall, looking ridiculous. And then, there is no more hiding. Biasutto is a liar and a fraud, but he has the power to get what he wants.

When a system’s this rotten, the only way out is ruin.