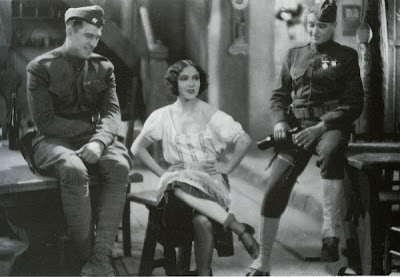 There is a space between the film you are watching and you. Great sound films make that space seem to disappear. But great silent films--accompanied by sound that is not a recording of events onscreen, but an evocation of them--can keep us very conscious of our role in the interplay between image, sound, space and time. I’m not saying silents can’t be immersive—quite the opposite. I’m saying there’s a constant give-and-take going on when you watch one, especially a very good one; viewing them, we must often deal with shifts between the literal and the figurative.

There is a point in What Price Glory?, a war movie, where I occupied this mental-emotional in-between ground, and felt under attack. It was during a big battle scene, predictably; a long and harrowing, but not literally brutal succession of moments—violent, but without the blood and entrails of Saving Private Ryan (1998) or Platoon (1986), or even the murderous mechanical pounding of All Quiet on the Western Front (1930). In What Price Glory?, the warfare blurred into pure expressionism. Clouds of ash, smoke and dirt filled the screen, punctuated with flashes of light, like smatterings of fireworks, always accelerating. Marching lines of soldiers, in longshot, faded into those clouds: enforced order dissolving into the chaos that was its ultimate purpose. I felt utterly at its mercy.

Yet the film isn’t terrifying most of the time. In fact, What Price Glory? is mostly comic: a simple story of two soldiers, unalike in look and methods, competing for the love of a woman (several, really), over years. 1st Sgt. Quirt (Edmund Lowe) is crafty, smug and confident—a master of card tricks and other magic. He makes hankies, coins and eggs disappear, and a few women too, from the clutches of his rival, Capt. Flagg (Victor McLaglen). Flagg is tattooed and rough-hewn; the antithesis of Quirt. 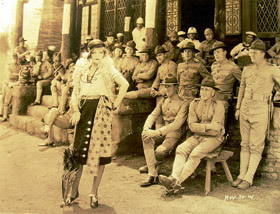 Before we see those lights in the sky, and the dead young recruits, and the boots, hooves and wheels sinking in mud the consistency of cream of wheat, we see Quirt and Flagg: tussling over Shanghai Mabel (Phyllis Haver), in an apartment guarded by a monkey with a knife. Quirt outmaneuvers Flagg, then does it again when the attention of a Filipina prostitute is up for grabs, and again, perhaps, in France—closer to the War—when the men are billeted at an inn belonging to Charmaine de la Cognac’s family. Charmaine (Dolores Del Rio) could motivate any man to fight; patriotism notwithstanding. 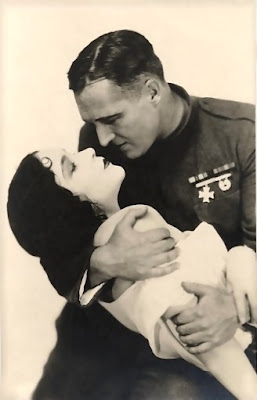 The first views we get of both Haver and Del Rio are from the rear. What Price Glory? can be shockingly blue, in fact, especially when it comes to Charmaine: a decent woman, but loose by silent film-standards; thrilled by the presence of war on her ‘front lawn’ and the men who come along with it. (Watch her caress Quirt’s medal; then watch him brush her breast in return.) And Quirt and Flagg constantly swear; you can read ‘son of a bitch’ on their lips as clear as Helvetica, and it got big laughs from the audience I was in, partly because the intertitles never acknowledge it. The studio must have known. 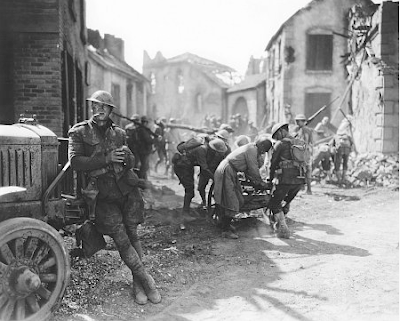 The film is filled with these paradoxes—shifting wildly between moments of sex, light humour, even farce; and the terrible seriousness of the Front. Flagg, the roughneck, is also a sensitive man who writes tortured, poetic letters about the waste of war. Quirt, so socially adaptable in good times, proves vulnerable to shellshock, or something like it. Their final ‘card game’ for Charmaine’s affections seems frivolous, yet the stakes are so high you wonder what they’ll do to win it. And when it’s won, you’ll wonder if Flagg and Quirt were the real competitors after all. Perhaps Charmaine and the War wage the greater struggle: for the hearts and bodies of decent men, all marching into the clouds and dissolving into nothingness.

***Director Raoul Walsh was also the man behind The Thief of Bagdad and Sadie Thompson; two films more like this one than they seem, at first.
Posted by Chris Edwards at 12:49 PM