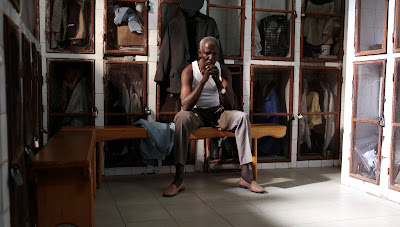 “The pool is my life,” says Adam, moments before it’s taken from him. He implores his boss, hotelier Mrs. Wang, to understand. He has tended her hotel pool for years; before that, he was a great swimmer, so renowned that people still address him as ‘Champion.’ It’s not a title spoken with awe, but with warmth and familiarity. Adam (Youssouf Djaoro) practically lived in pools as a young man; now he makes his living maintaining this one. And his beloved son, Abdel, works alongside him. He’s fulfilled.

Mahamat-Saleh Haroun’s A Screaming Man surrounds gentle, smiling Adam with terrible events. The hotel is in N'Djamena, capital of Chad. Outside the capital, and closing in, are rebel forces. Radio reports are fearful, and worse are the TV images, showing soldiers in—it looked to me—their early teens, dead in the dirt. Adam and his wife, Miriam, playfully lick watermelon juice from each other’s lips as the images play. They aren’t oblivious, but the peril hasn’t hit them yet. Home is balance. So is work, where Adam presides over an opulent pool filled with laughing children of various colours—

“You sit down a lot, Adam,” says Mrs. Wang. “Why would we need two pool attendants?” And so Abdel (Diouc Koma) becomes the sole pool attendant and Adam is relegated to the hotel gate. It’s hot and dusty work, and dry. Adam’s peaceful smile disappears, and his goodness starts to falter, matching his misery.

Adam falls far, far into evil, really, but so central is he to this story and so decent a man otherwise that I didn’t want to judge him. I only wanted to judge the deed he does—as though the moral misstep could be defined as a separate thing and simply fixed to Adam the way the sidecar his son sits in attaches to Adam’s motorcycle as he drives them both to work. Haroun and Djaoro give us a man too likeable to wholly condemn; he seems fatherly even to us, and so we make excuses for him as we would family.

I’m avoiding telling you what Adam did, since that’s a spoiler. But does the deed really matter? Haroun’s treatment had me thinking more about what brings a good man down than what a good man is capable of doing wrong. A soul’s depths are theoretically bottomless, but what tempts one to plumb them? 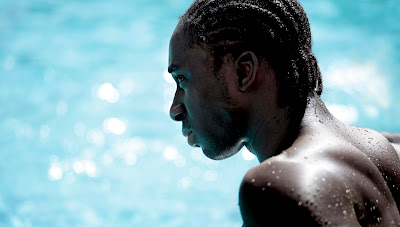 For Adam, I think, it is the loss of identity, and the desperation that follows from that. The pool is his life, as he says; it is where he is master, it’s where he became the Champion he still is. He stands tall and healthy on-deck, comfortable in his white clothes. But at the hotel gate he’s a lackey, smothered in a green-grey uniform that doesn’t fit and scurrying like a bug between entranceways and exits, car-horns bleating at him.

I’m reminded here of two great silent films, both of which I believe Haroun saw before making A Screaming Man. The first, Metropolis, has a famous scene in which a privileged man (who spends his days wearing white) must trade places with an underground worker, moving the hands of a giant clock from lit-point to lit-point, for hours. When we glimpse Adam at the hotel gate, he’s running back and forth to lift the car barriers by hand, prompted by the drivers’ impatient honking. Both scenes attack the idea that all jobs, if performed well and for proper pay, are noble. This one is demeaning; and Adam is embittered by doing it. 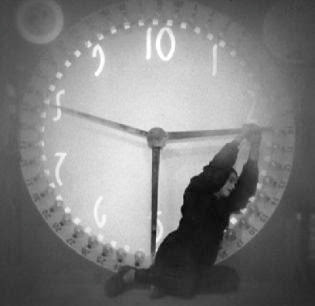 Haroun also hints at The Last Laugh, a film about a doorman at a luxury hotel who is forced to retire. Like Adam, the doorman sees his job as his life; his mighty coat defines his identity and when he loses it, he loses the rest of himself with it. He becomes capable of bad things because the better man he was now hangs in a closet somewhere. The doorman can’t get his old job back, but if there was a way, no matter how low-down, he’d do it. For Adam, there is a way. 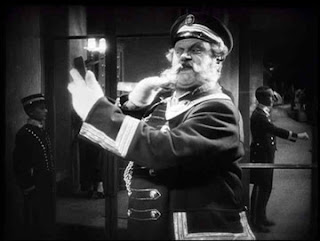 A Screaming Man is harrowing in its depictions of social unrest—not through scenes of overt violence, but through the immediate, destabilizing effect of it. N'Djamena empties before the rebel advance, and Adam, a spiritual wreck, can only walk and motor toward that danger the rest of his people flee. “At least I can count on you, Adam,” a shaken, and much friendlier, Mrs. Wang tells him, as the pair stand before the now-empty pool. No other staff-member showed up.

These moments of emotional honesty, coupled with truly fine shots of the African landscape—desolate and flat, but still rich in vistas of ochre, red and black—enhance a script too heavy with bromides and stock characterizations. “I cooked from the heart,” the fired hotel chef reminisces, smiling up from his hospital bed. “I gave my son to the army,” states a proud local official, secretly a coward. “I’m Abdel’s girlfriend,” says a pretty young stranger on Adam’s doorstep, visibly pregnant. The film is Djaoro’s to win or lose, and he proves a champion, just like Adam. 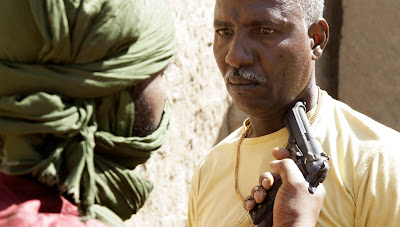 Some will call A Screaming Man an anti-war film, but for me, its message is more the danger of loving one’s job too much. Adam was so content, then so, so ruined. When securing the things that make us happy, it’s best to diversify; and never, ever look past the ones who love us for free.

Where to find A Screaming Man:
A Screaming Man will have an exclusive engagement at TIFF Bell Lightbox for at least one week starting on Thursday, March 17.
Posted by Chris Edwards at 10:30 PM