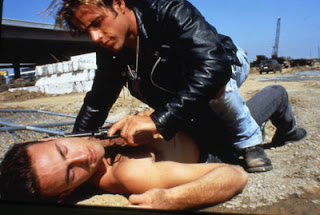 I am older than the AIDS crisis. In 1981, when I was four, the U.S. Centers for Disease Control (CDC) identified a virus in five homosexual men in L.A. When I was five, ‘AIDS’ replaced ‘GRID’ (gay-related immune deficiency) as the accepted term for the disease in the press. I grew into my teens with the knowledge that AIDS was something lethal and terrifying; an awareness supported by public health campaigns and the media. Dramatic works by artists and writers, gay and straight, helped me appreciate who and what its victims were—and weren’t. AIDS made young people die, and that was the point.

I know a lot of doctors socially, and they tell me things are different now. People diagnosed with HIV live many, many relatively healthy years—at least, in the West. I’m not trivializing the diagnosis, but in my lifetime, I do think it has lost the aura of a death sentence. If you’ve experienced this diagnosis yourself, and are reading this, and disagree with me, tell me so. I don’t mean to speak for you.

In a sense, maybe, AIDS is a post-modern disease. We’ve given it names, conscious that these names set its boundary lines and help us decide what it is. Perhaps we do that because, for years, AIDS was associated with groups that were easily judged, and we know that was wrong; or because one can be diagnosed with HIV while still feeling fine, making the whole thing seem intangible at first. What does AIDS mean? The answer keeps moving ahead, right alongside the medical advancements that treat it, and not always in lockstep.

The Living End, made in 1992, seem to takes place at a point of transition in the AIDS experience. Its lead characters, Luke and Jon, are HIV-positive men; they’re young and openly gay, and their diagnoses come when, perhaps for the first time, one’s reaction to it could include a long-term plan. Luke, already HIV-positive when we meet him, is a nihilist, determined to do whatever the hell he wants, paying for it all with his uncle’s credit card, for however long he has left. Jon, who’s diagnosed at the start of the film, would probably have turned inward to deal with it, had he not met Luke. And even after that, Jon never really signs up for Luke’s oblivion-quest. 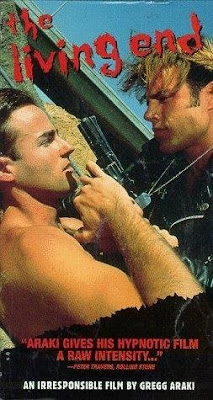 It’s Luke himself (Mike Dytri) that Jon signs up for. As filmed by director Gregg Araki, the hustler is indisputably attractive; he’s blond and toned and keeps an unlit cigarette hanging from his mouth. His confidence is an act, really, but for Jon (Craig Gilmore), a movie critic, he’s kitsch in a sexy way. Jon makes diary entries into a Dictaphone and drives a beat-up car with a bumper sticker: ‘Choose Death’ on the rear. He’s just as full of it as Luke, but he might know it.

Jon just doesn’t seem the type to ‘choose death’—by packing a change of clothes and hitting the road with Luke, it seems more like he’s choosing life. At least, the visceral, spontaneous side of it that stable people secretly long for. He leaves behind his job, his fish, and his frantic friend Darcy (Darcy Marta), who probably loves him too much. He has intense, kinky sex with Luke, with little thought about what their relationship amounts to—or ought to amount to. He goes along with Luke’s dead-end philosophy, despite never fully internalizing it. “The world’s a big, confusing place, isn’t it?” Luke says to Jon, as though that’s reason enough to give it the finger. And later, when Jon feels over his head: “Go back to your HIV-positive life…and don’t forget to have sex in a plastic bag.” 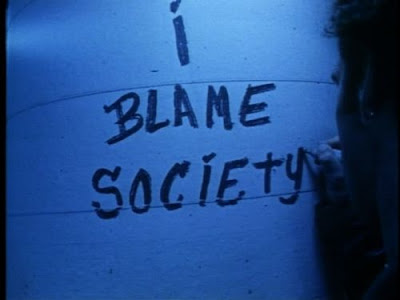 Luke does have a point about the world—this version of it anyway. Surrounding Jon and Luke’s pretty serious relationship is a population of oddballs and high-camp weirdos; most of them straight and many of them would-be bashers, several of whom Luke shoots dead. Araki makes no attempt—absolutely no attempt—to build a realistic or sympathetic society for his protagonists to travel through. In fact, Luke’s off-and-on murderous rampage seems farcical until it threatens Jon, the only other character with any weight in The Living End.

As Luke grows more unhinged (or, as it becomes obvious how unhinged he’s always been), you begin to wonder how badly this will end for both of them. For Luke, I think, death is acceptable if it comes when he wants it to. This is the least the world owes him, having screwed him over from the start. “We’re victims of the sexual revolution,” he tells Jon, in another of his preaching moments. Being HIV-positive means Luke will die sooner than most, and that, in turn, means he’s free to live and die any way he likes. Or maybe he just needed an excuse.

More importantly though, what does being HIV-positive mean to Jon? If it really does mean a death sentence to him, does that partly explain his attraction to Luke? Jon’s too smart to believe Luke has a future. But he must also realize that Luke’s future is short not because of AIDS, but because of his reaction to it. This debate, always implied but never stated, is the taught thread running through a movie with many ups and downs. This is how we got here.

Where to find The Living End:
Presented in a digital restoration, The Living End is part of the retrospective, Kaboom! The Films of Gregg Araki, running April 8 to April 20 at TIFF Bell Lightbox.
Posted by Chris Edwards at 1:00 PM