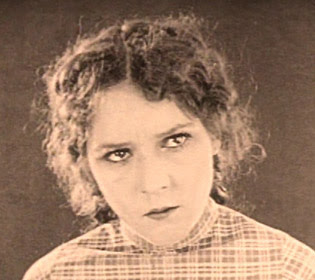 Daddy-Long-Legs is the third of four Mary Pickford films being screened as part of “Mary Pickford and the Invention of the Movie Star,” an exhibit dedicated to the silent icon (and Toronto native), currently running at Toronto’s TIFF Bell Lightbox. The exhibit is located on the fourth floor of the Lightbox, in the new Canadian Film Gallery, and features some 300 items, including photographs, posters, memorabilia, postcards, and products endorsed by Pickford, assembled over a 30-year period by private collector Rob Brooks. It’s curated by Sylvia Frank, Director of the Toronto International Film Festival’s Film Reference Library and Special Collections.

TIFF Bell Lightbox screens Daddy-Long-Legs this Saturday, January 22nd, at 11 am. It will be followed by The Poor Little Rich Girl (January 23rd). The series also included Rebecca of Sunnybrook Farm and Sparrows, screened January 15th and 16th, respectively.

An infant is found in an ash can, nameless, with no note attached to her blankets. Mrs. Lippett, matron of orphans, must give her a name. She takes ‘Abbott’ from the phone book and ‘Jerusha’ from a nearby gravestone. Jerusha Abbott, nicknamed ‘Judy,’ grows to be a bright, capable twelve-year old in the orphanage; and her past—no more than the name, a fiction borne of expediency and luck—will never really impact her. Daddy-Long-Legs isn’t about the past, or very much else, besides the furtive push through life of a very talented, determined young woman. This is one of Mary Pickford’s best films.

Daddy-Long-Legs works because it’s cynical, just like us. It answers questions that we, the modern audience, can’t help but ask. When we smirk, the movie nods. This sets it apart from some of Pickford’s works, which can feel over-weighted today; filled as they are with appeals to charity, courage and Christian faith in the face of adversity. Her waifs are archetypes, in archetypal crises, and the results are more sermon than social commentary.

Daddy-Long-Legs doesn’t seem any different, at first. It opens with a sentiment-heavy set of title cards comparing the souls of infants to various plants: some who are born into luxury and nurture, like hot-house roses; others, like baby Judy, who “see the light of day from the sordid atmosphere of dump-heaps—stunted, crushed, and fighting for their very existence.” We see a bean sprout in a trash pile. A boot steps on it. It rebounds.

Very inspirational, this. Impactful even, if one stops there. But the lecture goes on. Mrs. Lippett is a cactus. Her miserable right-hand, Pansy Gumph, is stinkweed. Daddy-Long-Legs holds sentiment high, then drops it on the skewer, before we’ve seen Pickford’s face even once.

The silliness continues through the film’s first thirty minutes: a gag reel of physical comedy and chases more typical of Chaplin’s or Arbuckle’s work than Pickford’s. A big joke involves the star and her sidekick getting plastered and running amok through the orphanage, ridding the place of prunes. It’s really funny. Nevertheless, I know my silent melodrama, I know my Pickford, and I kept waiting for a trap—some moment when the movie’d forget its wit and start pouring on its message. Maybe when the visiting hot-house rose, Angelina Gwendolin Rosalind Wykoff (Fay Lemport) yanks her doll from the hands of a dying orphan toddler, for fear of germs? Nope. Instead, Judy snips the doll’s arm when Angelina turns away, and bolts to the baby’s bedside with wealthy patrons at her heels, yelling ahead to the toddler: “Love it quick, you ain’t going to have it long!”

Pickford was 27 when she made this film. She spends the first half of it around real children, some nearly as tall as she is, dressed in body-flattening gingham, her hair and makeup minimalist by silent-era standards. A petite woman with a large head, she looked enough like a kid that we can forget she wasn’t one—or even close to being one—in 1919. We grow used to it.

Then director Marshall Neilan vaults her—and us—into her adulthood, all with a single closeup. So luminous is Pickford in this moment that the whole movie turns upon it. No longer can Daddy-Long-Legs be a slapstick comedy. The face compels romance. It must generate love, as a pebble makes rings in a pond. And love is serious, even though people in love can be seriously stupid. 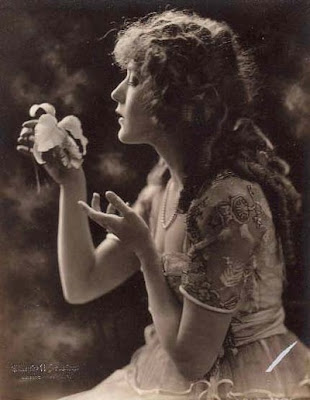 Judy remains cagey and rebellious, charming anyone not afflicted with class-prejudice. Soon a wealthy patron recommends her to a hidden, long-legged figure whose money would allow Judy to go to college and achieve her potential. He agrees to fund her, but will not reveal his identity to Judy. She knows him only as a lanky shadow, seen once in the orphanage. From this she gives him his nickname, ‘Daddy-Long-Legs.’ He remains her benefactor for some time, but they correspond only through letters. It won’t take you fifteen minutes to figure out who Daddy is.

Judy attends college, making friends easily. At some point she performs the female lead in a production of Shakespeare in the Park. In the audience, on the lawn, are two very interested men: the wealthy Jarvis Pendleton (Mahlon Hamilton), and the wealthy Jimmie McBride (played by the director). We now cut to a scene at Cupid Headquarters, where a senior cupid reprimands a junior officer for shooting the Arrow of Love through one suitor and into the other, thus smiting them both. What a great moment. If one intends to use the Idiot Plot, one ought to admit it. 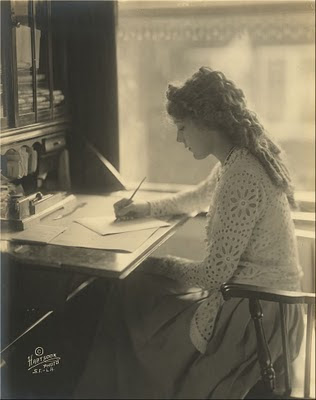 Daddy-Long-Legs is so brisk, efficient and effective that you might miss how quickly its supporting characters fall away. Potentially long-term foils like Mrs. Lippett, Pansy, Angelina, and Jimmie make trouble only briefly, then are gone. The more contrivances the film sheds, the more clear it becomes that it’s Judy, not the villains she faces, nor the suitors she chooses between, who matters most. If she discovers Daddy-Long-Legs’ identity or not is secondary. If it pleases her or not is irrelevant. By the end of the film, we’ll follow this lady anywhere.

Watch for an early, extended gag in Daddy-Long-Legs, involving a well. Fatty Arbuckle performed a similar routine in Love, his comedy short released the same year. Arbuckle had a habit of ‘colluding’ with his audience, addressing the camera with winks and grimaces before performing a prank. His films had a subversive attitude, much like Daddy-Long-Legs does. In both cases, we’re in on the joke.
Posted by Chris Edwards at 7:53 AM